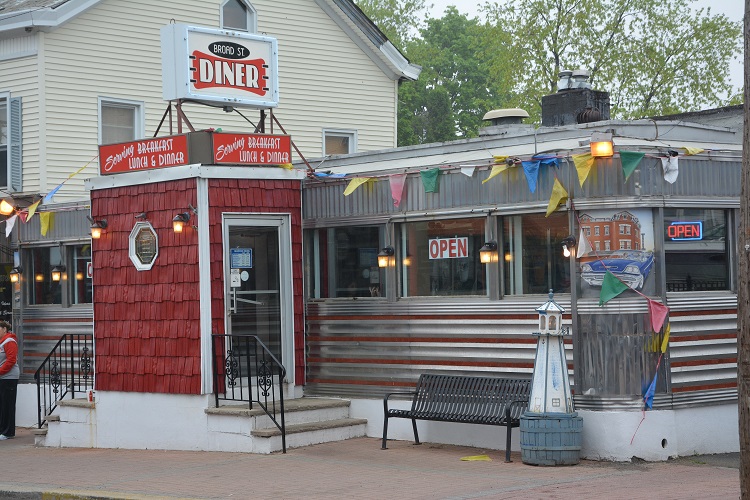 It was 10:44 on a misty Saturday morning and the stainless steel exterior of the Broad Street Diner in Keyport glimmered ever so gently as the delicious aroma of breakfast filled the air.

The Broad Street Diner is small—compared with some of the grand, mega, retro-styled diners that you’ll find down the shore these days—but that’s all part of its appeal. Broad Street is a vintage, factory-built diner, circa 1952, crafted by the grand master: Jerry O’Mahony. The O’Mahony stainless steel tag is attached to the inside of the vestibule door. Broad Street is one of a handful of classic O’Mahony diners still operating in the Garden State. In February, Maria and Nick Kallas opened the place (previously known as Stanley’s Seaport Diner) and they’ve established a winning recipe: not just the delicious food, but the complete package of friendly, Americana diner atmosphere and heartfelt hospitality. This is no throwback attempt staged to recreate some bygone era. Rather, it’s a present-tense experience, a real-deal celebration of how a Jersey diner should look, feel, and operate.

The joint was packed—filled to the brim with the bustle of neighborhood patrons. Music by the Four Tops played in the background for the diverse diner audience. I grabbed a stool at the counter. Maria poured a cup of coffee and it hit the spot, a rich brew and special blend of beans from a private coffee roaster. A few cups later, it still tasted smooth and super. Service was friendly and efficient, but not hurried. Two eggs over easy, sitting atop a generous ration of homemade corn beef hash and a side order of fried potatoes, offered pure enjoyment, especially when I was able to balance a nice mix of egg, hash and fries in a single forkful. Wheat toast complemented the platter, followed by more coffee.

A big, luscious wedge of chocolate cake, shamelessly displayed on the counter, under glass, was perched at eye level, sitting about 18 inches from my nose. At the time, I took pride that I was able to resist the temptation. However, upon reflection, I must confess deep regret. This was a missed opportunity to indulge. What was I thinking?

As they say in the diner biz, “Food is only half the meal.” The savory atmosphere is the other half—and equally important. If possible, when visiting a Jersey diner, sit at the counter. That’s where you’ll meet, greet, and mingle with the staff and customers. To my left was a truck driver who hails from my hometown, Clifton. He gave Broad Street “two thumbs up.” He’s been to his fair share of hash houses throughout the state and knows his stuff. To my right, Skip enjoyed his special-request breakfast: scrambled eggs on top of a big slice of ham, with deep-fried potatoes. A Keyport sage, Skip has been eating at various iterations of this establishment over the years. He declared that the Kallas family’s ownership is the best ever. At the end of the counter, Jim, a jazz drummer with a crew cut, was gleefully admiring his bowl of oatmeal, which was covered with a heaping pile of banana slices and cinnamon. He had a gig that night and needed a hearty breakfast to fortify himself for the performance. At the other end of the counter, a good-natured, animated chap was having a blast, joyfully tearing into his steak and eggs.

For lunch, the soups of the day were Manhattan clam chowder, split pea, matzo ball, and chicken noodle. House specials included a hickory-smoked, pulled-pork sandwich; the “Juicy Lucy,” which is a house-blended burger stuffed with cheese on a brioche bun; a hot open turkey sandwich; “Mom’s” meatloaf; and a broiled “simple” salmon platter.

In Keyport, on this Saturday morning, on any given Saturday morning, there’s no better place to be. Customers and wait staff interact on a first-name basis. The diner is part of the community. Amen. The Broad Street Diner is further proof that, without question, New Jersey is and always will be the diner capital of the universe.

It was noontime and the breakfast crowd had thinned out. Lunch customers were starting to arrive. I heard the Beach Boys singing, “Went to a dance, looking for romance, saw Barbara Ann, so I thought I’d take a chance.” That was my cue. Time to go. Goodbye Alex. Goodbye Maria, Goodbye counter guys. Goodbye Barbara Ann. I’ll be back.