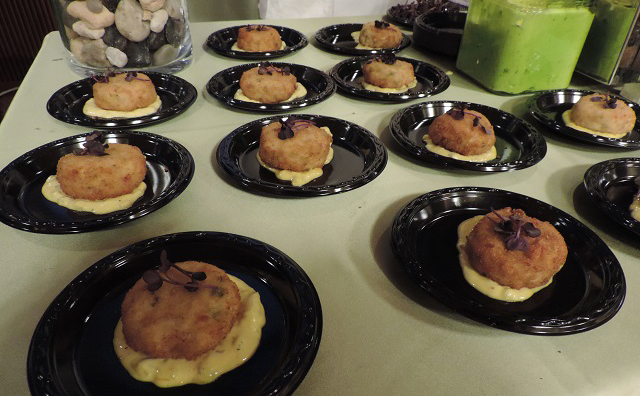 What’s new in Atlantic City? How about Faroe Island salmon stuffed with lobster (FIN at Tropicana); Asian Grilled Reuben with pork belly and sriracha (the Metropolitan at the Borgata); and olive oil poached salmon with pine nuts and porcetta (the Twenties at the Claridge). That’s just a tempting taste of the 2015 Atlantic City Restaurant Week, Sunday March 1 through Saturday March 7, 2015. If you have not visited AC lately, now is your chance to explore the menus at 73 area restaurants who will be offering three-course fixed-price dinners at $33.15 and lunches for $15.15.

Jersey Bites was recently invited to a sneak peek of the event—a preview
party held at the Claridge, the beautifully refurbished 1920s-era boardwalk hotel. Executive Chef Frank Mulino offered up his tasty meatballs al forno with creamy polenta, a dish to rival any Italian grandma’s. Executive Chef Rob Sartorio of the Grotto at the Golden Nugget suggests that Restaurant Week diners try his pork saltimbocca and his incredible cheesecake panzarotti: yes, that’s cheesecake wrapped in pizza dough and deep-fried, served with cinnamon sugar and strawberry sauce.

Of course, there is no shortage of celebrity chefs in Atlantic City. Wolfgang Puck’s American Grille at the Borgata will offer a Restaurant Week menu, as will Guy Fieri’s Chophouse at Bally’s, which the Food Network Star debuted just this summer. Try his Sashimi Tuna Taco or the Chianti Braised beef Short Rib with Guy’s famous Donkey Sauce (an interesting mayo-based creation with roasted garlic, Worcestershire and mustard).

Gordon Ramsay Pub & Grill, a newcomer, had its grand opening at Caesars Atlantic City on February 13. Chef LaTasha McCutchen, fresh off her Season 13 win on Hell’s Kitchen, gave Jersey Bites a glimpse of Ramsay’s traditional English pub fare such as Toad in the Hole, Scotch eggs and, of course, fish and chips. Their Knickerbocker Glory is an irresistible concoction of Chantilly cream, homemade strawberry jelly, toasted cake, homemade vanilla ice cream, and chocolate pretzel bark. Next time you are on the world famous boardwalk, stop by Boardwalk Cupcakes at Bally’s Wild West Casino, where you can sample more creations from Caesars’ Executive Pastry Chef Deborah Pellegrino.

Gallagher’s Steakhouse at Resorts Casino Hotel will have both lunch and dinner menus for Restaurant Week. General Manager Donna McCarthy and Chef Sergio Soto want you to know that their 16 oz. boneless prime rib is back by popular demand. Gallagher’s will also be serving daily drink and appetizer specials, including their special Sangria Sunday, Margarita Monday and on Wednesday, select half-price wines by the bottle. Atlantic Cape Community College Academy of Culinary Arts was a beneficiary of the event, along with the Community Food Bank of New Jersey. ACCC was well represented by “Team Cuisine,” winners of the 2015 Pre-Chef Grand Prix Cooking Competition. The Claridge’s Brulee caterers prepared 550 of the team’s award-winning mascarpone crab cakes. (For the recipe, see www.acrestaurantweek.com/ac-favorites/recipes). Brulee’s own tantalizingly sweet and savory macarons with meyer lemon had an unexpected jolt of nduja (“en-DOO-ya”), a southern Italian spicy, spreadable pork sausage that the New York Times has aptly described as “flaming liquid salami.” Much like Atlantic City’s many fine restaurants—full of pleasant surprises.

Visit www.acrestaurantweek.com for a list of restaurants and menus, reservation information and more. Reservations are recommended, especially on the weekend. Mary Wozniak is a South Jersey mom, lawyer and freelance writer who lives in Leeds Point, the home of the Jersey Devil. She is the Jersey Bites editor for Atlantic County, which is a foodie’s dream—from the celebrity restaurants of Atlantic City to the blueberry farms of Hammonton and the oystermen of the Great Bay. She can be reached at marywoz815@gmail.com.