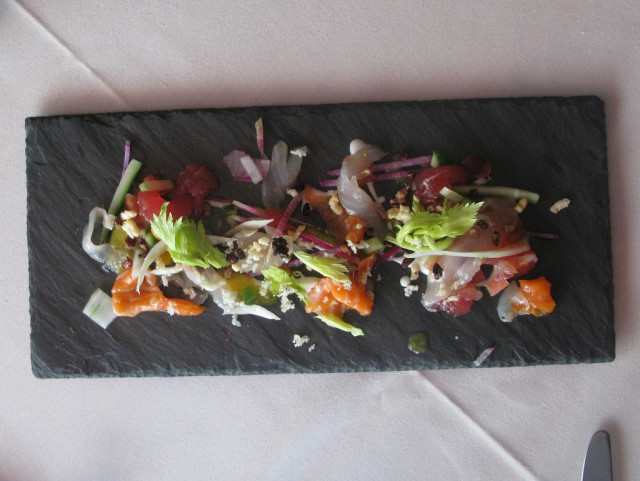 Fans of Lidia Bastianich – the impresaria of Italian cooking who instructs and entertains through her beloved television shows, cookbooks, and restaurants across the U.S. – might not be surprised to learn that Felidia, her Manhattan flagship, has been serving delighted customers since 1981. (That’s practically a century in restaurant years.) What those fans might not know is that one of the secret ingredients to its ongoing success comes from New Jersey … by way of Sicily, that is.

Fortunato Nicotra, Executive Chef of the famous Felidia, makes his home in Bergen County with his wife, Shelly (a producer of Lidia’s Italy), and their three growing – and culinarily adventurous – kids. Born in Sicily, Chef Nicotra grew up and began his career in Torino, in the heart of northern Italy’s Piedmont region. Influences from both areas flavor his approach to crafting the spectacular menus at Felidia that promise what he describes as “upscale, modern Italian cuisine featuring local and seasonal ingredients.” After a recent guest visit to the restaurant, I can attest that he delivers on that promise with food that flows from his bustling kitchen that is as simple and gorgeous as it is deliciously unique.

Having earned his first Michelin star as a rising young talent in Italy, Chef Nicotra reached the heights of culinary success early and began to itch for adventure. When a friend put him in touch with Bastianich, who happened to be looking for a chef for Felidia, he began a series of transcontinental phone calls that landed him both his next career move and his future wife.

Here’s more, straight from the source.

JERSEY BITES: How did your move to New York come about?
CHEF NICOTRA: Everything started a little more than 19 years ago. I always wanted to come to the States for an experience. I was in Sicily, running two restaurants – both with one Michelin star, which is the most I could get in Italy so it was the top of the mountain. I had a friend who had a restaurant in Torino, the best restaurant in Torino at the time, and this guy was also a good friend of Lidia. He connected me with Lidia and I started to talk by phone with a lady – who now is my wife – because she was able to speak Italian, having spent four years in Florence. In October 1995, I finally made it here.

What drew you to cooking in the first place?
My mother, like any Italian mother, is a great cook. [During the years when I was ages] 8 to 12, my parents both worked and I was left with an old Piedmont lady. During the week she was preparing for the big meal on Sunday. She was spending three or four days of the week preparing for that meal.

I remember the smell of a lot of garlic. She used a lot, especially when she was doing bagna cauda, a sauce of anchovy and mostly garlic. She was also saving a piece of different meat every day and then she put it together to make ravioli. It’s part of Piedmont tradition. It can be any meat – chicken, rabbit, veal, beef, pork – but it has to be three meats together.

I’ve tried to re-make this dish for Felidia. We do three-meat ravioli with duck meat, usually. Right now, we have fresh capon, guinea hen, sometimes wood duck. We finish the filling with foie gras – just a little bit to bind everything together. The flavor is delicate but it’s also aggressive at the same time. The sauce is a reduction of all the bones from the birds. It’s great.

Is there a secret to elevating traditional Italian food to the level Felidia is celebrated for?
[Editorial note: Three months after Chef Nicotra’s appointment at the restaurant in 1995, Felidia earned three stars from Ruth Reichl at the New York Times. In 2006, Frank Bruni repeated the three-star rating and wrote a rave review. Wine Spectator named Felidia one of the Top Ten Italian Restaurants in the U.S. in 1998, and USA Today placed it at number 2 on its year-end roundup of restaurants around the world in 2008.]

When people come to Felidia, they expect to finds things like Lidia cooks on the show or in Lidia’s book, which are completely different. Felidia is more like upscale, modern Italian cuisine.

Real Italian food is not regional – it’s not north, it’s not south. Especially to bring it here to the States. We can’t bring the cuisine of a little village in Italy here, because you cannot have whatever you find in the village. That cuisine is great because it’s done in that village. If you try to make it here, it doesn’t work. So what we try to do is use the local ingredients we have right here. I think that is the key to Italian food: fresh, seasonal, local ingredients. Then you build up your flavor.

One of the most important things I think in Italian food is that you recognize most of the ingredients you put in a dish. So you tend to put as few ingredients as possible. When you have the flavor, you don’t have to build up a thousand ingredients in the same dish. If you’re looking for mushroom, you should taste mushroom, not many other different things and then you say, “Oh, what was the other flavor that was there?”

So, that’s what we try to do – use the techniques and everything of real Italian food, but I think fresh ingredients are always the key. Also, everything is chopped by hand. For us it’s important, for the texture. Everything you put in the grinder tastes like baby food. So even if have to make ravioli for like 300 people, we chop everything with a knife! And you’re going to see the difference.

In the restaurant I opened in Sicily, I used dark chocolate cocoa powder. I used to use ricotta and almonds in the filling, and the sauce was traditional Sicilian with butter, saffron, and almond – all ingredients from Sicily. Here, I try to combine local ingredients with that recipe so I put squash inside. The sweetness of the squash and the bitterness of the cocoa powder combine together and it’s great. We have it through the end of February, beginning of March. That’s one of the dishes people are expecting every single year.

It’s also the season for game and mushrooms, braised meat. We have another dish – spaghetti with wild boar ragout, spiced up with andouille. That’s one of almost everybody’s favorites.

Where do you like to eat in New Jersey?
My kids love pizza. A Mano in Ridgewood – I think they have the best pizza. One of the best, for sure, I have tried here. The crust is great. They use really good ingredients. Ingredients, again! They use good flour, good tomato for the pizza, good cheese. You don’t need much.

We also like a Japanese place, Sakura Bana. We just went [recently]. Those are our two favorite places. My son eats anything. His favorite thing in Sakura Bana is grilled tongue! He loves oysters. He’s 13. He’s always been really open. When we go out, he’ll try anything. All of my kids do. Last year we went to London – we ate in this restaurant, it was one of the most beautiful experiences we ever had. It was a new place called Dinner. We had this beautiful escargot; it is one of the dishes that all of us are going to remember forever. There were six escargot. The presentation was so simple but beautiful. When I tasted the dish, I went ooohhh. My son said, “Can I have one?” I said okay. Then, “Oh, that’s good. Can I have another one?” It’s six escargot, come on! I think it was like 45 pounds for six escargot! It was so good.

What is your favorite comfort food?
Our comfort food is everything I can cook on a grill!

My Sunday night is always steak. I eat red meat only once a week. I always wanted to grill when I lived in an apartment in Manhattan. I tried to put something on a balcony and they told me it was illegal. You can’t do that! So when I arrived in New Jersey, my first thing was a grill. So we have a big grill on the patio outside and a smaller grill on the deck in front of the door.

I remember when we first got there, people thought I was crazy! “See these Italian people? They always grill!” One winter, there was two feet of snow on the deck and I made a space around the grill. I would open the sliding door and open the grill. I see the people looking from their windows, making a face like, “This is crazy!” For me, it was so much fun. All the snow was melting and it was great. Since then, every time I can use a grill, I do. We do chicken cooked with a brick. I kind of break all the bones, then put it on the grill with a six-pound brick. It becomes incredibly flat and tastes like fried chicken, it’s so crispy. It’s unbelievable.

What chef gift would you recommend for home cooks?
A great knife, because with a good knife you can make a difference. A great knife is always a great thing. It’s not crazy expensive. I don’t believe in brands. Each knife is different, each brand has different knives for something specific. I have meat butcher knives I bought in Italy; they are not fancy but they are the best knives for me. Then a Japanese knife for fillet or slicing fish. Each knife is different and good for something different. I don’t believe one brand of knife is good for everything.

I also really like a heavy pot to braise meat, like a Le Creuset or other brands. I’m pretty sure they’re all French! A casserole dish, a heavy one, that’s great for ragout or braised meat. The other one I like is Staub. They have beautiful colors. Sometimes I won’t even use it. I say, “This is too beautiful!”

What stands out for you about working with the Bastianich family?
It’s the passion they put into everything they do with food. Food is not just a job for them. It’s part of their life. I think people see that, and recognize that. That’s the difference with other food shows – all the screaming, all the trouble and fights. That’s not how it is with Lidia. I think that’s the difference: food being part of life.

Any new projects in the works?
We always think about cookbooks, but they take so much time. I like to take a recipe that we do in the restaurant and simplify for home cooks. I was thinking of doing My 20 Years at Felidia but I don’t know when I’ll get to it.

You’ve been on several episodes of Lidia’s Italy and Lidia’s Family Table, and battled Iron Chef Morimoto on the Food Network. When will you have your own show?
[Laughing] Somebody has to run the restaurant!