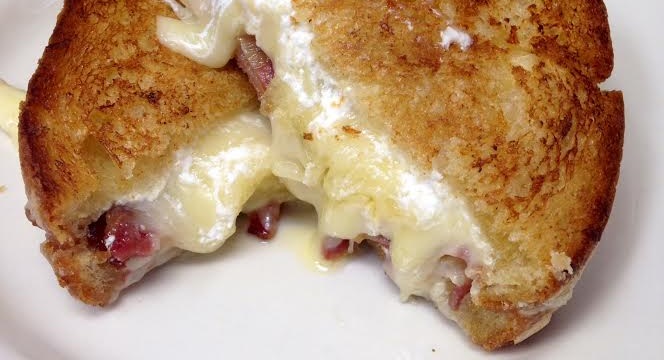 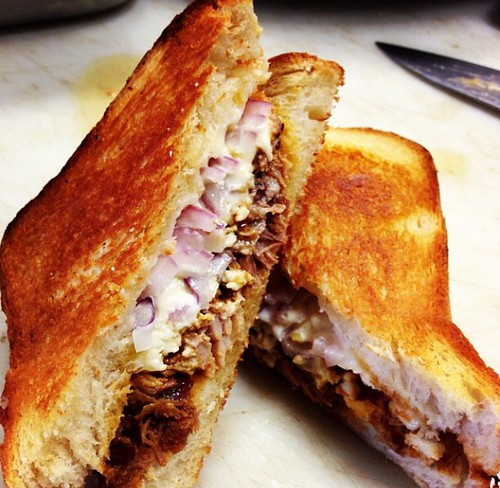 In honor of April being National Grilled Cheese Month, A Toute Heure’s Sous Chef Kelly Zavala took the time to let me know about some of her favorite grilled-cheese sandwich combinations, as well as the secrets to the perfect grilled cheese sandwich.

When asked what ingredients she adds to her grilled cheeses, Chef Zavala ticked off some of her favorites: bacon, jam, fruit, pulled pork, vegetables, and fresh herbs. Some of the flavor combinations Chef Zavala has put out at A Toute Heure include jalapeño jam with bacon and cheddar; corned beef, cabbage and Swiss for St. Patrick’s Day; pears, beet pesto and brie; and ramp jam, bacon and cheddar. Are you inspired yet?

Like any sandwich, a grilled cheese starts with the bread. Chef Zavala recommends using a hearty white bread as that will brown up nicely. The next step—butter—is no surprise. Lots and lots of butter. When she makes a grilled cheese at home Chef Zavala’s six-year-old daughter is in charge of smearing the bread with softened butter. Once the bread is buttered, then you can really let your creativity shine. The choice of cheese is one that people can tailor to their tastes. Chef Zavala’s favorite cheeses are ones that will give you the perfect melty consistency, like brie and provolone, while goat cheese is also very popular at the restaurant.

Once you’ve decided on your fillings and the sandwich is assembled, place the buttered side down in a cast-iron pan on medium heat. When the bread turns golden brown, flip the sandwich and pop it in a 350°F oven for three to five minutes. Cooking it in the oven will help the cheese melt and give you the ooey-gooey consistency that great grilled-cheese sandwiches are known for.