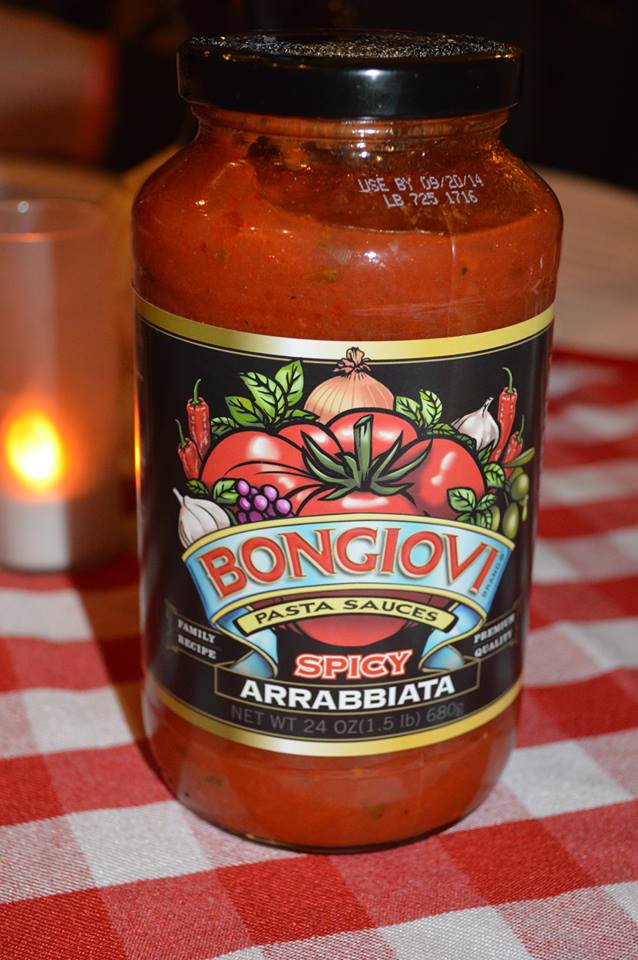 As a New Jersey native, I’m destined to like certain things. Two of those things are tomato sauce and Jon Bon Jovi. So when I was offered an invite to taste test the Bongiovi Brand tomato sauces, I quickly accepted. I learned quickly that there are more than just musical genes in the Bongiovi family. Turns out, John Bongiovi, Sr. aka ‘Mr. B’ and father to New Jersey’s own Jon Bon Jovi, is an excellent cook. Ever since he can remember, family and friends have urged him to take on the chance and share his tasty sauce with the rest of us.

According to the Bongiovi Brand website, the recipe for the sauce was passed down through three generations of family members, originating in Sciacca, Sicily, in the late 1800s. The recipe stayed a family secret throughout the years and after much deliberation and coercion, Mr. B finally decided to try and bottle it with the help of his sons, Anthony and Mathew. Over five years and a lot of trial and error, Mr. B finally found a recipe that he felt comfortable putting his name on.

I had the opportunity to attend a sampling menu hosted at Jon Bon Jovi’s Soul Kitchen in Red Bank, where Mr. B was cooking up a storm and offering the intimate crowd homemade Italian comfort food with—dare I say it—jarred sauce. If I hadn’t known that the event was specifically designed to showcase his jarred sauce, I would have thought he had made it a few hours earlier. The sauce was surprisingly fresh and light, not lumpy or heavy, like other bottled sauces I’ve tried. My eggplant parmigiana dish featured mushrooms, spinach, and ricotta cheese, topped off with a light coat of the Bongiovi Brand’s Garden Style sauce featuring fresh basil, garlic, onion, mushrooms, and bell peppers. There are two other available flavors: Marinara, which features a “tantalizing combination of premium tomatoes, basil, onion, and garlic with just the right amount of oregano and parsley sautéed with a splash of burgundy wine” and Arrabbiata, featuring “cool tomato and basil flavors kicked up with just the perfect amount of a special pepper combination for just the right bite.”

After a very satisfying dinner, I checked out the ingredient list and to my surprise, there were absolutely no preservatives listed. (And preservatives are the general reason why you would never find any jarred tomato sauces in my cabinets.)

Before I left, stomach full and still in bottled-sauce shock, I had the pleasure to meet Mr. B himself. I told him how I had my doubts about how fresh a bottled sauce could taste, but that he had won me over. He just laughed, smiled, and said, “Me too. It took a long time to get the right recipe down, especially because we’re cooking in huge vats, not my small pot at home.” And I’m not the only one enjoying this sauce. Since they launched their Bongiovi Brand sauces in February of 2012, they have been voted the ‘Best Quality Sauce in a Jar’ by the panel at World Class Kitchens.

So the next time you’re unsure of what to do for dinner, just take a jar and you’ll enjoy it, I swear (yes that’s my attempt at remaking a Bon Jovi lyric.) You may not be able to actually dine with a rock star family like the Bongiovis, but you can definitely eat like one!

Bongiovi Brand Pasta Sauces are available in ShopRites nationwide and select Wegmans locations. A full list of purveyors can be found at bongiovibrand.com.