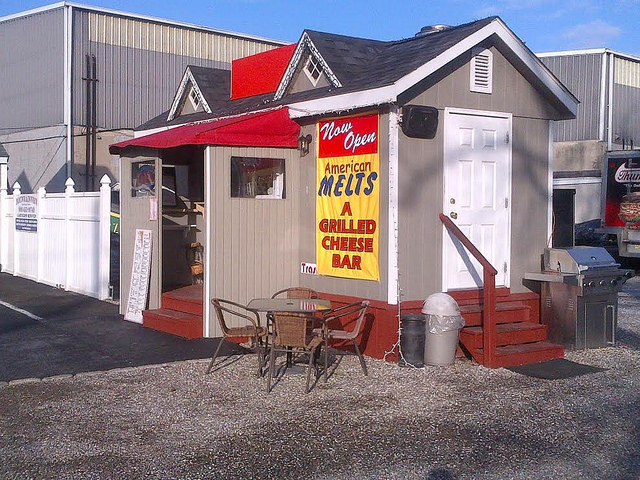 I don’t trust anyone who doesn’t like cheese—and  those who have a disdain for grilled cheese are not even worth my breath. Thank you, I feel better getting that out. On the flip side, for connoisseurs of fromage, I’d like to introduce to you the Littlest Greatest Grilled Cheese Place in New Jersey: American Melts. The place is no bigger than an oversized SUV. It’s in Kenilworth. It’s Heaven. Today, January 20, is also National Cheese Lover’s Day, so I couldn’t think of a better time than now to tell our readers all about this pint-sized paradise.

On Springfield Road, right off the Boulevard, lies a tiny hut that packs a wallop of build-your-own grilled cheese with artisan breads that include country white, rye, gluten-free, and get this—a glazed donut. The cheeses include New York cheddar, mozzarella, pepper jack, Swiss, and Monterey jack—there are even a brie and vegan American options. Sandwiches include proteins such as grilled chicken, roast beef, and healthy ham. And it’s nice to know that the proprietor takes his love of bacon seriously with both the original favorite and chicken. The list doesn’t stop there. The menu boasts toppings like Jalapeño, tomatoes, pickles, avocados, caramelized onions, portabello mushrooms, and pickles, for those of you who like your grilled cheese on the wild side. The daily specials aren’t too shabby, either, as they range from hummus selections, tomato soup, and a Grilled Cheese of the Day. 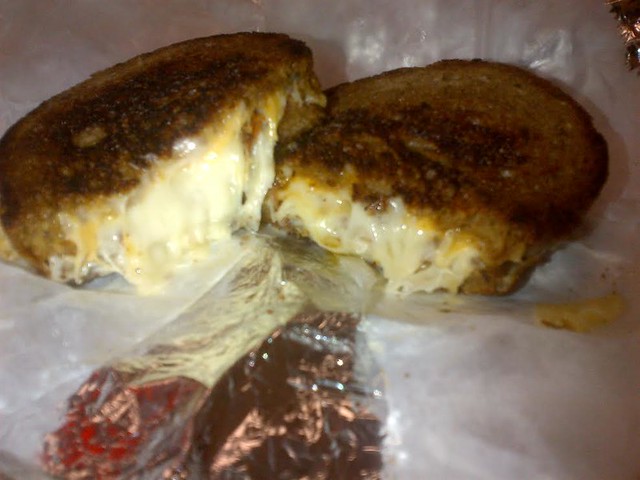 I’d like to think that I’m somewhat of a grilled cheese fan girl, but this place put me to shame, plain and simple. It’s hard to even imagine how all the ingredients on the menu can even fit in a house that looks like it’s fit for Santa’s elves. My boyfriend and I visited on a Sunday and with no line, we ordered pretty quickly, uttering more than enough “Umm… Oh, that sounds good!” I chose multigrain wheat, with pepper and Monterey jack, chicken bacon, and garlic butter, while my boyfriend got a “5 Way”—one of the many Chef’s Combinations (the chef’s signature sandwiches), which is, as you guessed—a love affair between five cheeses: Monterey jack, cheddar, Swiss, mozzarella, and provolone, with garlic butter on country white. He added pork bacon to his, because, as the friendly owner said, “Everything tastes better with bacon.” The sweetest part: We didn’t have to wait out in the cold—the Chef kindly brought the sandwiches to our car!

Everybody has their own secrets to making their perfect grilled cheese, but this guy has the science down. He doesn’t gob the cheese all over the bread to the point where you’re picking up the hardened specks from the paper—it’s just enough; and the bread has a flawless, buttery crunch. It’s deliciously homemade, and the pride in the fresh ingredients and carefully constructed American classic is enough to make anyone cry. American Melts is a Union County masterpiece, and for all you cheese lovers out there, go now, before the chef is on Diners, Drive-Ins and Dives and his precious station turns into a reservations-only, fine-dining destination.

Lisa Panzariello is thrilled to be part of the Jersey Bites crew, and as a fellow Jersey foodie, she lives and breathes all things delicious. Born and raised in Essex County, she now resides with her boyfriend, James, in Union County. Her writing career has stemmed over 14 years, starting with Metal Edge Magazine, then later as an editor for Penthouse, where tasting many an ethnic cuisine in The City made her realize her true passion: Mixing food with writing. Now focusing solely on freelance writing, her flexibility is giving her more freedom to cook and bake, sometimes for 24 hours straight. Given her Irish and Italian heritage, Lisa travels for an impressive beer list and loves anything relating to her Celtic roots; and just like her Nona before her, she wants everyone to feel the love and warmth in her cooking—while splitting it with those around her—especially her two dogs.