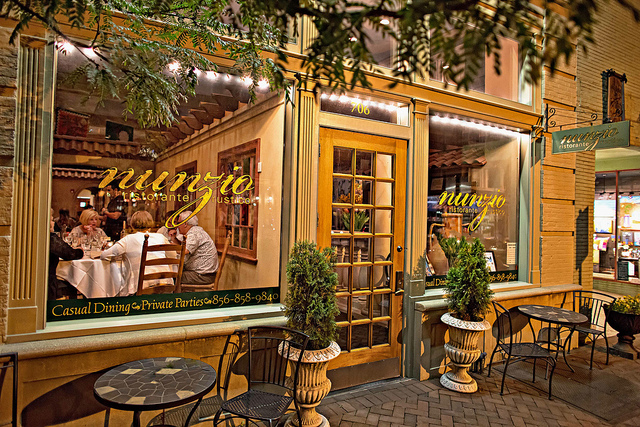 This year’s Truffle Dinner was held on November 21, 2013, with Chef Patruno dishing up two pounds of truffles and  accommodating more than 160 reservations during the night of his annual dinner. Patruno, who was born and raised in the heart of Italy’s agricultural region of Puglia and grew up on his family’s farmstead, cooks with a from-the-earth-to-the-kitchen philosophy. He has been serving up truffles since coming to the United States in 1982.

Now that the Truffle Dinner has passed, Chef Patruno and his talented staff are busy preparing for their next series of special dinners including a Seven Fish Dinner for Christmas Eve and a New Year’s Eve Feast, with reservations currently being accepted for both. Chef Patruno’s Seven Fish Dinner will be held on December 24, 2013, and will include marinated cod (ceviche style), cod fish croquettes with tomato and basil, PEI Canadian mussels marinara sauce with garlic bread, calamari Dorati with fresh lemons and spicy marinara sauce, crispy fried smelts, fish stew with bay scallops and traditional Sardinian pasta, traditional baked cod fish (Sicilian style) with potatoes, onions, black olives in a light tomato sauce and a selection of traditional Italian Christmas Eve desserts.

Special dinners and cooking events have becomes a hallmark of Chef Patruno and Nunzio’s Ristorante Rustico, and a “Cooking with Nunzio” calendar of events was just released for the first quarter of 2014. For $50 per person, attendees get two hours with Chef Patruno as he dives into fun cooking topics such as Aphrodisiacs, Foods of Love; Ancient Pompeii, City of Decadence; Sauces and Pastas from Naples; and Fish and Shell Fish from the Gulf of Naples. You can learn more about Cooking with Nunzio by checking out his calendar of events.

Nunzio’s Ristorante Rustico has been serving up authentic regional Italian dishes, which include fresh pasta, choice cut meats, fresh seafood and homemade desserts, since 2003. Patruno and the restaurant have earned many awards and top reviews including Top Chef of South Jersey, Best BYO and the Golden Fork Award by South Jersey Magazine, the New York Times and Philadelphia Magazine. Linda Arceo loves everything Jersey, including the food. A lifetime Jersey girl, Linda has a special affinity for the Garden State including its many community supported agriculture (CSA) programs, farmers markets and local fares. Linda has BA in Psychology and an MA in Writing and uses her writing skills daily as a grant writer. Linda is the voice behind the blog, Giggles, Gobbles and Gulps which she describes as a quirky little blog about all things important – food, drink and a dash of life. Linda won the 2012 Woman’s Day Magazine National Chili Cook-Off (Best Beef Chili category) and is a connoisseur of craft beers. Linda regularly posts about beer on her blog as part of her weekly Malt Monday series. Linda is married, has two sons and two Yorkshire Terriers. When not thinking about food (or beer), Linda enjoys traveling, music, going to the beach and shopping for shoes. Follow Linda on Twitter @GigGobGulp or find her on Facebook at facebook.com/gigglesgobblesandgulps.