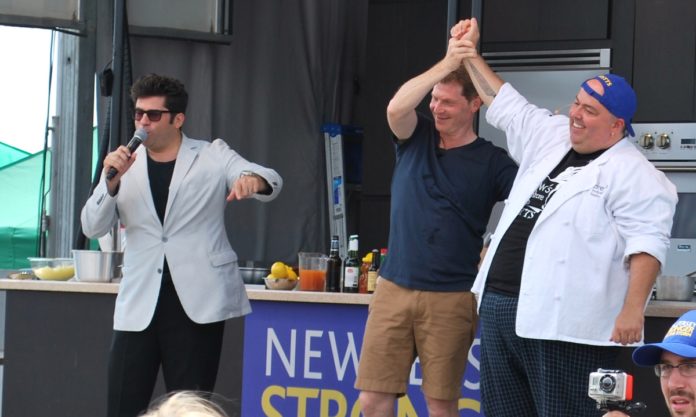 Cameras? Check. Lights? Well, the sun was pretty strong, so check. A crowd full of Keyport residents and Jersey Shore towns ready for a “throwdown?” Check. A local Keyport chef and restaurant owner with an unforgettable dish? Check. A celebrity chef who attempted to win the tough crowd over? Check.

If you’ve ever watched Throwdown! with Bobby Flay on the Food Network, you know the routine. The hometown chef thinks they are filming a short segment for a show, demonstrating to the audience how to cook their signature dish while Bobby Flay comes bursting on the scene, challenging them to a ‘throwdown.’ The crowd goes wild, the chefs ‘throwdown’ their dishes, and then the satiated crowd chooses the winner.

These two chefs competed in front of a cheering hometown crowd on Keyport’s bay front where 9 months earlier the water had flooded the entire area.  Mayor Harry Aumack welcomed the crowd and noted that during Hurricane Sandy, Keyport experienced the largest surge on the Jersey coast – over 14 feet.  The event was sponsored by New Jersey’s Stronger Than the Storm association which focuses on elevating New Jersey residents after Hurricane Sandy, noting that Sandy may have knocked us down, but we’re back up and moving forward. Chef Drew’s restaurant is a prime example of coming back stronger than ever after Sandy. His restaurant was demolished by Hurricane Sandy, but with the community’s support, he reopened in March with a new location on Church Street.

The very pro-Chef Drew crowd put the heat on Bobby Flay, even after he tried to win them over with some baseball hats and jokes. Chef Drew showed no signs of spotlight jitters. With the crowd on his side he maintained his cool, acting like he always spends his Thursdays competing against celebrity chefs. But unlike other Throwdown! shows this pro-Chef Drew crowd wasn’t going to be choosing the winner.

The big stage brought a celebrity judge panel with it to see who reigned supreme at the Jersey Shore. Chef Bobby Flay and Chef Drew had to win the taste buds of Darryl Dawkins aka Chocolate Thunder, Gloria Gaynor, known for singing I Will Survive, and James Osland, Editor-in-Chief of Saveur magazine. After a short deliberation and many “mmmms” and “oh yeas,” the celebrity judges voted Keyport’s very own Chef Drew the winner.

Chef Drew may have given some hints of how his winning “throwdown” dish is made (hint he makes it with his own seasoning which isn’t available in stores), but I have a feeling there’s more of his ‘voodoo’ in there then he was willing to share. So if you’re interested in tasting a dish that beats a celebrity chef like Bobby Flay, go try Chef Drew’s own Voodoo Shrimp at Drew’s Bayshore Bistro (and if you get his secret seasoning recipe contact me!)

Melissa Beveridge  is a freelance journalist and editor, focusing on great food, healthy living, and wellness. Her passion for eating and living well embodies her writing. A lover of all things Jersey, she is also an avid traveler, always looking to discover those hidden culinary gems everywhere she goes. Her musings can be found on her blog mbeewell.wordpress.com. – See more at: http://www.jerseybites.com/the-team/#sthash.u4jD20VG.dpuf