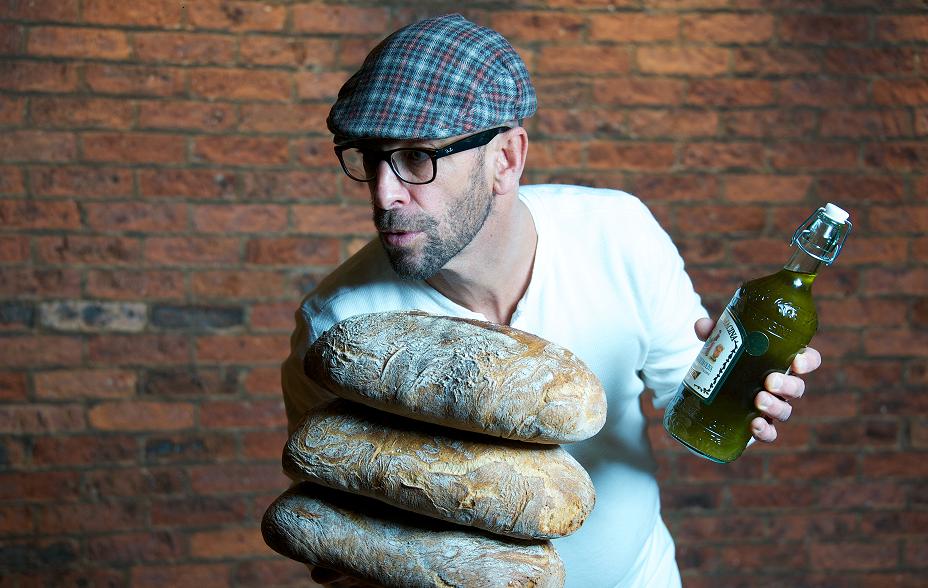 Lidia Bastianich, Mario Batalli, and Michael Chiarello: Italian household names in the home cook’s kitchen. These famous chefs offer us recipes, lessons in the Italian language, and in the Italian culture. Well, get ready to add another name to that list: Victor Rallo, Jr.

New Jersey restaurateur, Victor Rallo of Basil T’s Brewery and Italian Grill in Red Bank and Undici Taverna Rustica in Rumson, is hoping to join the ranks of these great Italian personalities when his PBS show, “Eat, Drink Italy with Victor Rallo” premiers late this Spring.  Local newspapers have even likened him to “The Next Mario Batalli.” Now those are some very big orange Crocs to fill!

Once you sit down with Rallo you understand immediately what the buzz is all about. He’s passionate, charismatic, and knowledgeable about all things Italy, not just the food and wine, but the culture and history behind the food and recipes. Last year Rallo published his own travelogue book about the Italian food and its culture. He realized that his giant personality would be able to transform the words in his book better, so he began filming short YouTube videos where he taught viewers about Italian food and wine. The latest video shows Rallo interviewing Agostino, a winemaker for Fattoria di Magliano and lacopo Lenci (Agostino’s son) who is the brewer of Bruton Italian beers. In these videos, you’re invited to the kitchen table conversation where Rallo’s relationship with Agostino and lacopo Lenci and passion for exquisite tastes and food and drink combinations shine through.

These welcoming and informative videos quickly gained traction. Friends were even impressed, so much so that one friend urged Rallo to speak with a producer.

“I’ll have a glass of wine with anyone” Rallo said with a huge smile.

The Beginning of “Eat, Drink, Italy”

So three years ago he shared wine with the producer. Sparks must have flown because a year later they flew to Piemonte to film a pilot. They put themselves on the line, funding their own travel, film crew, and editing, with the common goal of creating an outstanding product for the public. The hard work and passion paid off when Rallo found out that NWET would be picking up his shows in late spring.

“I think the product is great, it’s something different than anything on TV today. It’s energetic. It’s a new approach to wine and food,” said Rallo.

This past summer through the early fall, Rallo and his team traveled to Italy three times, each for a two-week period, touring Italy and shooting enough footage for 13 episodes.

“Eat, Drink, Italy with Victor Rallo” isn’t your typical cooking or travel show. Watching the promotional clip with Rallo you soon realize you’re touring Italy with someone who’s in the know. In the short 5 minute clip, Rallo is seen picking olives in Sicily, cooking in Chianti, meeting a cheese ager who ages his cheese in a former Mussolini bunker, truffle hunting, cooking with the daughter of the famed de’ Medici family, touring an organic beekeeping farm, corking champagne the old fashioned way, attending a wild boar roast in Tuscany, and even yodeling in Northern Italy (he’s not too bad!).

He’s not interviewing the people on the show, he’s having a friendly conversation with them, and the viewer gets the chance to be a part of these conversations that normally would happen behind closed doors. The guests on his show are (or soon become) his friends, whether it’s from his Italian travels over the years or the relationships that he’s cultivated through his restaurants.

“I have a passion for Italy. My goal is to bring my passion and what I believe are the great things of Italy involving food and wine and a little bit of culture back to the American public and show them on TV.”  He wants to connect the American public with the diversity of the Italian food, wine, and people.

After all “I could go there 30 times a year and see something new every time. How beautiful would that be to bring that to the American public.”

The exact premiere date will be released soon (April or May). Be sure to watch out for hints of cross promotion with his show and his restaurants, but don’t go to the restaurant on the premier date expecting to see Rallo in front of the big screen. Most likely he will be at home, alone, waiting to hear what the initial feedback is from the public.

He knows he has a great product now he just hopes America likes it as much as he does.

You can stay in touch with Victor Rallo at his website www.victorrallo.com.

Grand Lux Cafe: A Go-To Restaurant for All Tastes and Styles