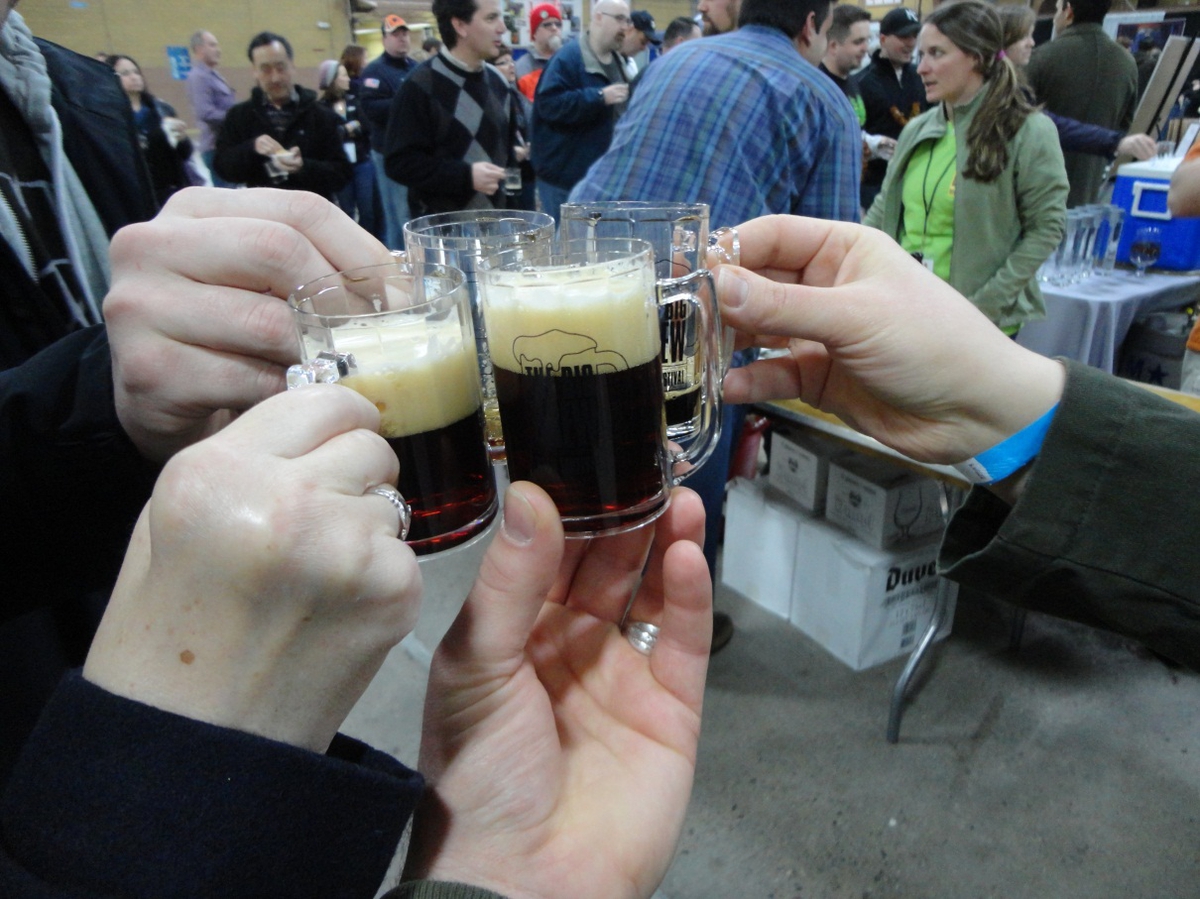 Before proceeding to the review, I feel the need to preface it with the following:

From my perspective, this event was a huge hit due to the fact that I purchased V.I.P. tickets, and I had an amazing time, but I would be remiss if I did not include some of the complaints that caused the event’s website to become a billboard of apologies afterward.  The event staff stated that they had a complete failure of the barcode scanning system which led to the enormous lines in the almost unbearable weather Saturday night, I was informed that some patrons waited upwards of 2 hours to enter the event. The event staff also apologized for the lack of restrooms for both men and women the venue provided, causing bathroom lines to exceed 30 minutes at sometimes during the event.  If you experienced any of these issues, I can see why you were not happy.  But with that said, I would like to move past the issues and touch on some of the highlights of what an event like this should be, and hopefully will be next year. There are very few words in the English language that when combined create a sense of pure joy deep down in a man’s core.  “Unlimited bacon,” for example, is one such combination.  “Super Bowl” is another, but since my doctor says that my cholesterol is higher than Oscar Meyer’s and the Super Bowl just ended, there can only be one other duo of manly verbiage that I can be writing about this week, BEER FESTIVAL!

For anyone who does not know what a beer festival is,  it is an event where beer vendors from all over the country converge on one particular longitude and latitude to showcase their hoppy goodness and woo potential customers by filling their gullets full of their wondrous concoctions.  In addition to the fantastic beers that are usually on hand at one of these magical soirées, there is never a shortage of awe-inspiring food and attention-grabbing vendors vying for your business as well.

The Morristown Big Brew Beer Festival was held at the Morristown Armory.  My wife, Kat, and I decided to splurge on the VIP admission because it allowed us to enter an hour early, sample the most exclusive beers at the festival, and included a gourmet hors d’oeuvre spread provided by the Morris Tap and Grill.  Considering that I knew I was going to be writing a review about this event, I felt it was my duty as a food blogger to not only cover the tantalizing libations but also the unique food offerings.

Kat and I arrived at the Morristown Armory shortly before the doors opened and took our place in line while we waited to be let into the venue.  We met up with our friends Kristen and Brian and began to wander around the immense space that housed the 100 plus craft beers that were on hand.  We headed for the V.I.P lounge which contained the extra special beers like 25th Anniversary Imperial Stout by Lakefront Brewery, INC., a Doppel Bock from the Climax Brewing Company, and of course FU Sandy by Flying Fish Brewing Co., which is a limited edition beer that supports the relief effort for rebuilding towns that were ravaged by Hurricane Sandy. After we wet our whistle with some of the best 2oz samples of beer that I have ever had the pleasure of tasting, we decided to visit the hors d’oeuvre table.  The Morris Tap and Grill offered an array of appetizers that left me asking myself, why the hell I had not heard about this place sooner?  (Seriously, my so called Facebook “friends,” you are all at fault here, and I am not sure that I can forgive you.) After a round of tasting like that, we decided it was a good time to refuel at the Morris Tap and Grill station once again.  This time we had to pay for our meal, but it was worth every penny.  The Grilled Voodoo Chicken Sliders and The Baconator Sliders were our selection.  The chicken sliders were expertly seasoned and once again had just the right amount of tangy goodness.  The Baconators were slightly undercooked but still tasty.  Kristen and Brian got some cheese curds from the Wisconsin’s Cows and Curds Food Truck that was parked in the event and offered me a taste, which made my stomach smile.

After stuffing our faces, we decided it may be a good idea to saunter around a bit and visit some of the vendors that were not giving us an unlimited supply of hangover juice.  The first vendor we spoke to was The New Jersey Craft Beer (NJCB) Membership Club which offers its members discounts on craft beer through its partnership with local businesses.  Being that I am The Blue Collar Foodie, if there is a way to get a deal, it is most definitely for me, and I joined on the spot.  The next stop on the sobering up tour was ChewTheDirt.Com, which is an E-Zine that claimed to be a curator of man stuff.  I was able to speak to the man behind the magazine and peruse the website for a short while and liked what I heard and saw.  Chew The Dirt reminded me of Maxim Magazine before they turned into just another boring men’s magazine and lost their edge.  We then stopped over at the Jersey Club Sports’ table and discussed the finer points of Kickball and Dodge Ball, two of the team sports this innovative and fun company offers its clientele.  The JR Cigar table was next, and we chatted about the only product on this planet more masculine than the beer we were sampling:  stogies.  We were even able to find a table serving samples of Homemade Momma’s Hot Apple Garlic Chicken Wing Sauce, which Kat and loved more than this bear loves Saranac, so we had to buy it. After all this wandering, we realized that we needed to drink some more beer, considering this was a beer festival.  So, we embarked on Round 3.  Knowing this was our last round of drinking, Brian and I set our sights towards the breweries that were a must visit before we vacated this Beertopia, while Kat and Kristen decided to stalk the Cider tables once again.  Our final choices to sample were:  Ellie’s Brown Ale by Avery Brewing, Oak Aged Barleywine by Schlafly, Deviant Dale’s by Oskar Blues Brewery, Finest Kind IPA by Smuttynose Brewing Co., Double Simcoe IPA by Weyerbacher, Evil Eye PA by Evil Genius Beer Company, Double White by Long Trail Brewing Co., Maximus by Laugunitas Brewing Company, IPA by Full Sail Brewing Co.,  Mad Hatter IPA by New Holland Brewing Company, and IPA by Cisco Brewers.

After this last round of drinks, it was time for us to catch our ride, a huge thanks to Kristen’s Mom because Kat and I were in no condition to walk two miles to the Morristown Train station for our safe train ride home.  I am sure I am going to catch some hate mail for writing this obviously pro Morristown Big Brew Beer Festival, but I absolutely feel that the event staff involved did not mean to ruin anyone’s day. This was the first year this event was held and like anything in life, you live and you learn.  I do hope that this event will be held once again next year and everyone has the opportunity to have as good of a time as we did at this event.

Mike Arp a/k/a The Blue Collar Foodie was born and raised in Northern New Jersey and has spent most of his adult life on a relentless quest to uncover eateries that deliver white collar fare at blue collar prices.  This never ending journey, combined with his passion for writing gave birth to his current food blog, The Blue Collar Foodie, which is published on both WordPress.com and The Fair Lawn Patch. This blog chronicles him and his wife Zoe’s excursions to eccentric, unconventional, and of course affordable restaurants throughout the great state of New Jersey and beyond.  If you are the type of person that would rather rock a Nirvana T-shirt and jeans while eating your filet mignon then you most likely will enjoy what The Blue Collar Foodie has to say.  Follow him on Twitter @Fairlawnfoodie or Like him on Facebook to keep up to date with his current gastronomic gallivanting.