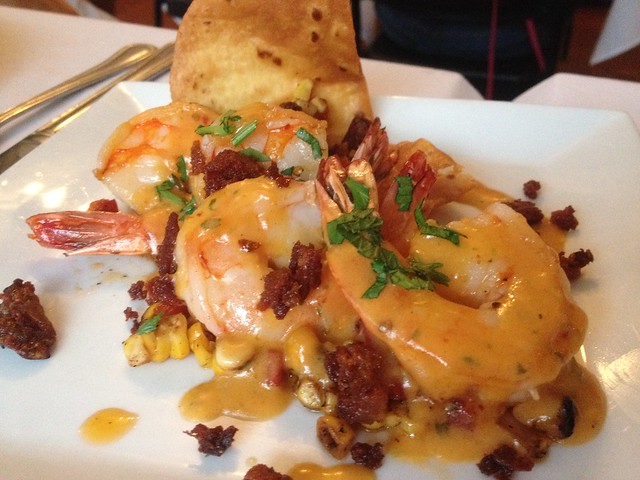 Fort Lee native Christopher Holland grew up with so many Asian friends that Korean BBQ and Shabu Shabu shaped his palette as much as the influences of his Italian/Irish background.  Holland  developed a penchant for exotic Eastern flavors that prominently figure into his culinary artistry today.  As Head Chef of Session Bistro, the year old boutique restaurant in Maywood adjacent to the Maywood Train Station Museum, Holland imbues nearly every dish with subtle and sometimes more pronounced nods to the flavors of his youth.  The son of a chef who insisted Holland “at least take a bite” of new preparations, Holland embraced his father’s admonitions and later used this openness to new taste experiences to shape his palette and orientation in the service of combining flavors, styles and textures.  While Holland’s parents divorced when he was young, he and his father bonded over food and remain close.  (Holland’s father Thomas, affectionately known as Pops, retired his toque after decades in the restaurant business, but still assists on occasion at Session.)

Did young Holland follow in his father’s footsteps?  Not immediately.  He held a few office stints for years while experimenting in his kitchen, developing a passion for cooking that was to become all-encompassing.  He walked into Chakra Restaurant in Paramus one night and asked Chef Thomas Ciszak to let him work there for an evening, without pay,  and was offered a job before the end of the night.  While Holland stayed for four months, he proved to himself that his bliss required a professional culinary path.

Enter Joe Troy, Hawaiian native and Philippine transplant, who moved several years earlier to New York City with two suitcases, $1,200 in his pocket and dreams of owning a restaurant.  After years of working in HR and other office jobs, often two at a time, Joe opened a Rockland county restaurant, found Holland through an advertisement and hired him as chef.  Setting his sights on Bergen, Troy fell in love with the Maywood property where Session Bistro is located and opened in April 2011, with another chef at the helm.  Soon after, Troy asked Holland to take over the kitchen at Session Bistro; Troy later closed the Rockland restaurant.  Troy and Holland, both in their early 30s, formed a partnership and Holland developed an ambitious menu that is self-described as Eclectic Fusion.  It’s an apt description, too.  It’s just that there’s so much more to it and requires what may read like a billet-doux.  Forgive me, but it’s rare that I find a place as original, charming and delightful to the palette as Session Bistro. 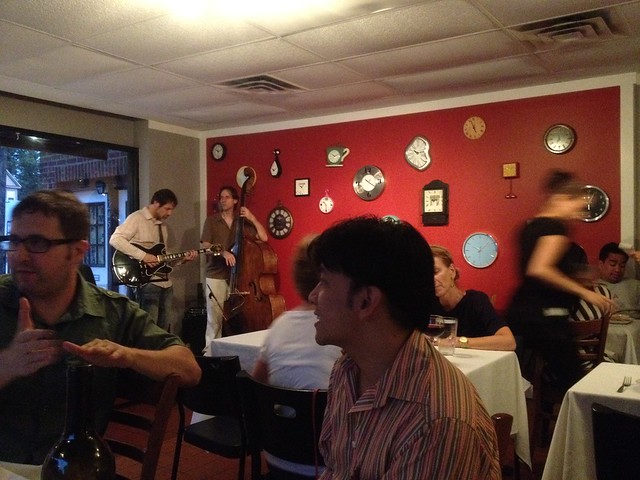 Before I get into the food, a bit on the restaurant’s ambience.  It’s an intimate space that holds about 45 guests.  It was recently renovated to remove the sushi bar and drab interior left over by its previous tenants, which were deli owners.  With a warm red jewel tone accent wall bedecked with a few dozen clocks (from Holland’s personal collection) and plenty of windows, minimal decor, much of the restaurant’s charm comes from the warmth of Troy and the wait staff.  A new partner, Louie Marquez, adds a welcome feminine touch to the restaurant’s outside seating area with a trickling water fall and potted herbs.  Add to the mix live music (when I visited, a jazz duet played standards and abstract melodies) and you have a hip vibe.  Combine that with Holland’s craftsmanship, and you really get something to swoon over.

Holland approaches cuisine with equal parts whimsy and thoughtfulness.  Patrons are greeted with a small dipping plate of an almost frothy puree of roasted garlic, shallot and beans, served with grilled pita slices.  The appetizers are classified as Tapas and designed to be suitable as small plates, palette teasers which could easily be enjoyed in place of entrees.  All are reasonably priced, starting at $8.95. 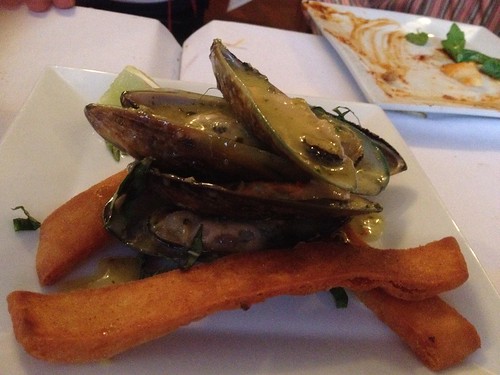 Bangkok Mussels ($8.95) are plump, juicy and briny in a delicate green curry beurre blanc, served alongside deep fried pita planks which act as tasty sauce-soaking vehicles.  Chorizo Scampi ($11.95) are beautifully cooked jumbo shrimp in a garlic and chorizo beurre blanc with chorizo cracklings strewn about, rendered down bits we fought over. 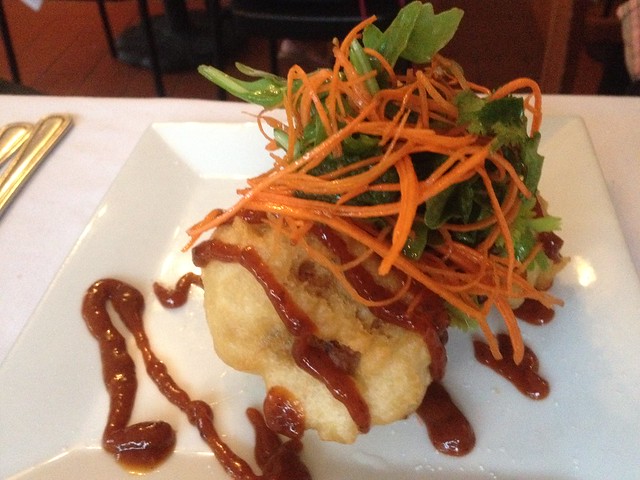 Pulled Pork Tempura (10.95) is as delicate as it is decadent, a pillow of crispy, airy beer batter encasing tender, richly flavored pork.  Bahn Mi style coleslaw lends brightness and acidity while  Holland’s homemade bacon BBQ sauce brings a sweet, sultry warmth to a perfect dish.  Holland’s bacon BBQ sauce should be bottled and sold as a accent sauce, not something you’d want to slather on chicken or ribs, but carefully add to protein you want to elevate to a sweet, tangy, elegant level.  This sensuous sauce starts with five pounds of bacon, which is rendered down for the base of the sauce.  I could go on about the sauce, but you get the picture.  Serious flavors and plenty of restraint make Holland’s sauces and dishes work so well.  Spices peek and beckon, but never over-power.

Holland’s M.L.T. appetizer ($8.95) is a collection of two inch grilled slices of pita spread with aioli, baby arugula, tomato and house smoked lamb bacon.  The “M” in M.L.T. is for Mutton.  This is classic Holland at work, or at play.  The traditional BLT elevated to a new level that is as playful as it is delicate and elegant.  On top of the tiny sandwiches is a tidy pile of salad.  On top of the salad is an addictive pile of fries, little shoe strings of salty goodness.  (Holland said they are an ode to his Greek/Jewish step-grandmother whose latkes he helped make at family gatherings.)

Love for the Mother Sauces motivate and inspire Holland’s repertoire.  Entrees, like appetizers, have well-paired sauces that compliment.  Nearly half the patrons at nearby tables had ordered lamb chops, and for good reason.  Coriander Crusted Baby Lamb Chops ($21.95) are coated with fresh ground coriander and served with mashed potatoes and curried carrot puree.  The coriander gently perfumes the tender lamb and the sweet, silken carrot puree and rich, creamy potatoes are the perfect sidekicks.  This dish is a winner.

Ancho New York Strip ($21.95) is 10 ounces of dry aged Angus NY Strip with a  gentle ancho chili rub, grilled,  topped with herb butter.  Holland grills Shitake mushrooms and nestles them on top of the strip while it rests, creating a lovely umami and mélange of flavors.  All of this on a cloud of those yummy mashed potatoes.  Very satisfying indeed.  (For $4.95, shrimp can be added to this manly plate.)

A delicate flounder dish is named Malgorzata for Holland’s fiancée.  A lushly flavored yet light beurre blanc, intensified with miso, has refined touch.  Sautéed spinach and more of that addictive mashed anchor the plate.  Sweet and sour mango dance in Malaysian Flirtation ($19.95) , a sauté of chicken and shrimp.  Not Yo Mama’s Chicken Parm (sic, $18.95) is deconstructed chicken parmagiana using slow poached breast, a sauces of sun dried tomato, roasted garlic and basil and a tomato butter sauce and ricotta cream.  It worked well for my companion, who enjoyed varying the amount of either sauce, chicken or ricotta on his fork. 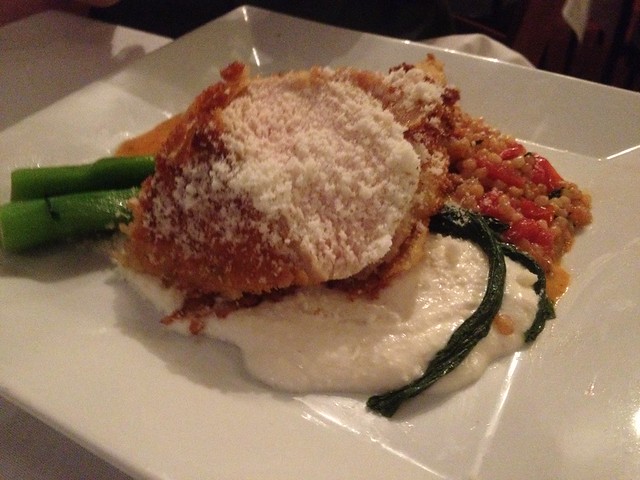 Shrimp and Grits ($20.95) is a homey, soulful dish that deeply satisfies.  Holland sautés jumbo shrimp and finishes them with a chorizo cream sauce.  Served with NJ corn he grates and cooks down with cream to resemble a lush polenta, this is a smooth, buttery, rich foundation to enjoy the well-seasoned shrimp against.

A palate cleansing plate of salted, firm, sweet watermelon slices is welcome after entree plates are removed.  Dessert is  a choice of house made ice cream.  We had chocolate almond, full of chocolate richness, and a more subtly flavored toffee cashew.  Both were served with fried fruit turnovers.

Session Bistro belongs under the category of Do Not Miss.

Located at 245 Maywood Avenue, Session Bistro, www.sessionbistro.com, is  adjacent to the Maywood Train Station Museum.   Hours will increase in September when the restaurant adds lunch service and Sunday brunch.  Lunch will be served from 11:00AM-2:00PM Monday to Friday and Sunday brunch will be offered from 10:30AM-2:30PM.  In the meantime, dinner service is Tuesday to Saturday from 5:00-10:00PM.  Live music is offered Friday and Saturday evenings after 7:30.  The restaurant has 45 seats and is available for private rentals.  201-880-7810