With a busy schedule of my own, I look at 30-minute-meal queen Rachael Ray and go “Why didn’t I think of that?” and admire her ability to seemingly do it all-Food Network star, talk show host, magazine editor, cookware designer and in her spare time, helm two charities.

All this while balancing her husband, dog and family. 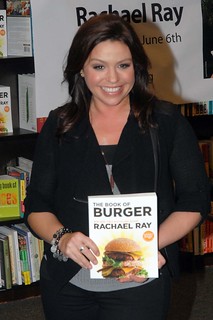 Rachael never seems to stop, although she did sit for a little bit and chat exuberantly with her die-hard fans at her recent book signing for her new volume, “The Book of Burger,” at a Barnes & Noble in the Princeton area.

During this brief window, I got the chance to chat with her in between estatic fans about life, food and her Adirondack home.

She claims there is “no such thing” as balance in her life and she doesn’t try to find it.

“You love what you do and marry someone who doesn’t mind eating late at night,” she said, with a chuckle.

She married her husband, John, in September 2005.

Among all the things in her busy schedule, she manages to maintain her vision by staying true to who she is and the things that are important to her.

“You can’t be all things to all people, so you try and the best at what it is you are going to do,” she said. “For me it’s accessibility and to keep everything accessible. Can people do and touch and try anything I’m a part of and keep it affordable and value oriented. Those are easy things to do because the is the way I was raised.”

“I never tried to be anyone else because I like being who I am,” she added.

Rachael was born in the Adirondacks in upstate New York and grew up in Lake George. She worked at the Sagamore, an upscale hotel on the lake and was a buyer for a gourmet store in Albany, where her 30-minute meal idea was born.

“30 Minute Meals” will always be her favorite show because that is how she got her start to foodie stardom. She loves her daytime talk show, the “Rachael Ray Show,” because each day is different, “Rachael vs. Guy” is her most exciting show, but “Week in a Day” is her most challenging show. “(Week in a Day) is really challenging to write and to film and teach,” she explains. (Rachael vs. Guy) is the most exciting, heart-stopping, heart-pounding thing ever!”

Rachael is most inspired by her mom, who managed several restaurants in the Lake George area. “If you love food, everyone who loves food inspires you,” she said. The $24.95, 321-page burger tome features more than 200 recipes for burgers, sliders, sloppy joes, sides and sauces from Rachael and her celebrity friends.

The guest chef recipes were selected from Burger Bash winners. The Burger Bash, a celebrity chef burger competition, has taken place the past five years at the South Beach Wine and Food Festival.

Rachael loves all kinds of food and can’t pick a favorite, but says her husband loves bacon and egg spaghetti, or pasta carbonara. “I’m an equal opportunity eater,” she said. “I will eat anything if hungry.” The strangest things Rachael has ever eaten were crispy fried bugs as a taco garnish in Mexico and chocolate covered bugs from her previous experience as a buyer for the gourmet market.

But, mayonnaise took her a while to like. “Mayonnaise was weird for me to like because I didn’t grow up with it,” said Rachael. “Now I make my own and I’ve made peace with the mayo.”

In her cooking, she does try to accommodate her fans dietary needs, both in print and on the show. In the book there are a few vegetarian and vegan recipes. The vegetarian sloppy joes, one of the recipes I tried, were delicious and the sauce was better than the canned version. The recipe was simple, easy to follow and came out perfectly, even thou I wasn’t paying total attention and screwed up a few steps. It calls for sherry vinegar and I didn’t have any, so I substituted balsamic vinegar instead and it was, as Rach says, delish! This particular recipe can easily be made vegan by eliminating the cheese and gluten free with special rolls or serving over polenta. 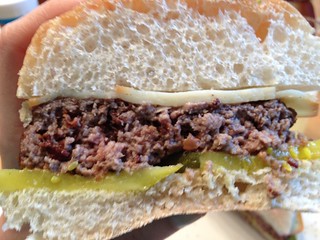 I also tried the Adirondacker burger and adapted it my own way. The recipe calls for slices of bacon on top of the burger, but I mixed real bacon bits from Rachael’s favorite smokehouse, Oscar’s Adirondack Smokehouse in Warrensburg, NY, into the ground meat for even bacon distribution. I also topped it with their smoked American cheese instead of cheddar and YUM-O it was one of the best burgers I have ever eaten!

Overall the book is a great collection of burgers and the burger’s friends for any chef and there are great tips and tricks sprinkled on the pages throughout the book.