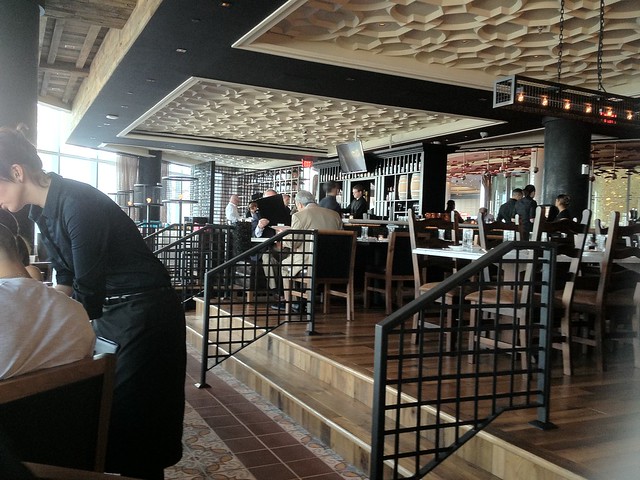 Amada, a tapas or “small plate” restaurant which recently opened at the Revel in Atlantic City is big on flavor with an impressive selection of traditional and not so traditional Spanish fare. According to Amada’s website, the term Tapas goes back to the 13th century Castilian King, Alfonso the Wise, who attributed his recovery from illness to small bites of food in between meals with wine. The dining room with breathtaking panoramic views of the Atlantic Ocean and fabulous New Jersey beach is the perfect addition to the staggering amount of top notch restaurant choices available in Atlantic City. Amada’s Chef, Jose Garces, of Chicago and Philadelphia has also opened a Guapos Taco truck and Distrito Cantina both with Spanish flavors and relaxed atmosphere on the casino floor at Revel as well as Village Whiskey the popular go-to-place in Philadelphia noted for burgers and fries done in duck fat that taste amazing. Chef Garces even has his own 40- acre sustainable farm outside Philadelphia where he grows much of the produce for his area restaurants. 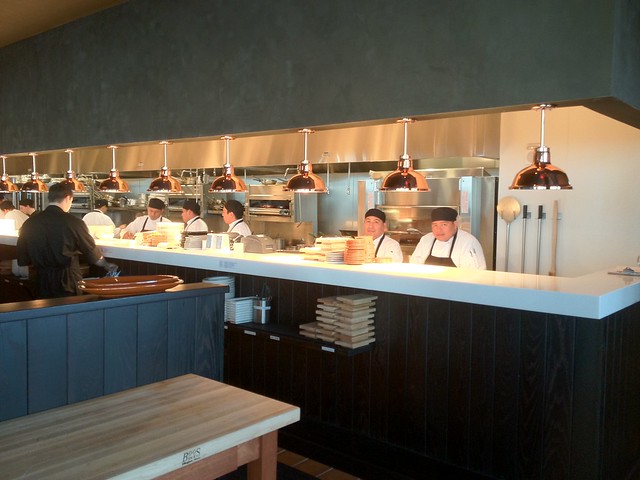 Amada’s rustic wood ceiling, tables and chairs contrasted by modern booths with globe lights wrapped in metal cocoon-like shells provide a warm, hip dining area. The open  kitchen lets the diner view the line whipping up plate after plate of delicious entrees served hot by an attentive staff that moves stealthily from table to kitchen and back again catering to your every need. The wait staff were extremely knowledgeable and offered suggestions to make the experience of navigating the many small plate choices complement one another. Did I mention the plates are as visually stunning as they taste? All the food is served family style, by that I mean in the middle of the table for all to taste and share. You might want to make it clear from the beginning that what you ordered is yours alone, before the others get at it. Trust me they will if they are anything like my family and friends. 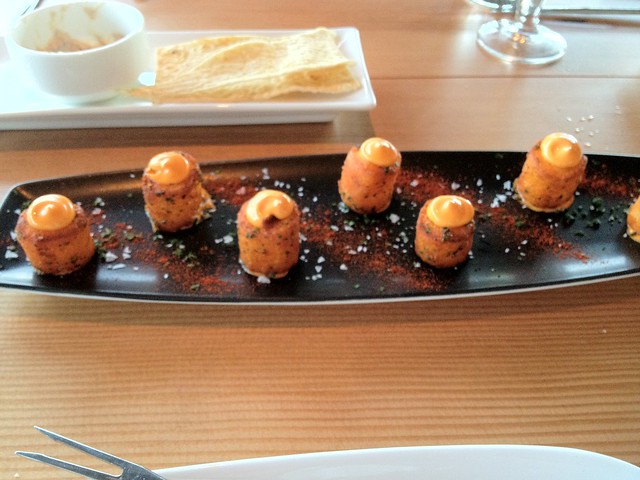 The server brought out a complimentary basket of flatbread with Tuna Caper Mayo that quickly disappeared and we decided on a couple traditional tapas appetizers to start. Gambas Al Ajillo, Garlic shrimp came out in a sizzling iron cooking crock plump and full of garlicky goodness, next out were the Patatas Bravas, Spicy potatoes with smoked paprika aioli, who doesn’t like potatoes and these were cooked to perfection with just the right amount of kick from the paprika. We all agreed to the salad Ensalada Verde, finely chopped arugula and endive with fava, green beans and asparagus and shaved Manchego cheese curls (my new cheese to buy) tossed in a sherry vinaigrette that included avocado which made for a slightly creamy texture.  The salad was a smash and something I would love to be able to recreate for my own table. The taste is unforgettable! I know all this for a salad, try it and you will understand. After the salad it was a whirlwind of gastronomic ecstasy. I don’t remember everything, it happened so fast. Good thing I took notes. 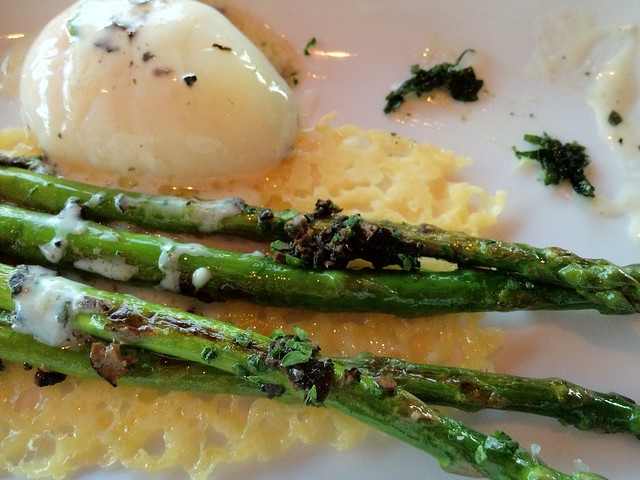 Habas a la Catalana, warm fava and lima bean salad, Alcachofas ala Parmesana, perfectly fried artichokes encrusted in parmesan cheese, Setas, sautéed wild mushrooms in season, Esparragos con truffas, grilled asparagus with a poached egg perched on top and Mahon crisp with truffles in a decadent béarnaise like sauce to finish. Beautiful and sexy. The meat for everyone was A La Plancha, from the grill, lamb chops cooked till just pink enough with grill marks to die for. Plump and juicy and three dipping sauces,Romanesco, Basil Apple Chimichuri, and a Whisky based puree with red peppers.The sauces were not even needed but eaten with a spoon, shh, don’t tell!

We basked in the glow of a meal well prepared and enjoyed contemplating how to finish the night with just the right dessert to complement such a beautifully satisfying meal. We decided on the light as a feather Donuts with cinnamon sugar and filled with orange vanilla custard with a honey dipping sauce and dollop of Banana Saffron Ice Cream and Crema Catalana,vanilla custard with caramel and pine nuts. Do not miss the donuts! I have never tasted a donut that light in my life, I don’t think there could possibly be any calories in them…really!

I highly recommend taking a big bite out of Amada and the many other fantastic restaurants created by Jose Garces as well as checking out the Revel. It is an amazing addition to the landscape of Atlantic City.

For more pictures from my evening, check out our album on Facebook.