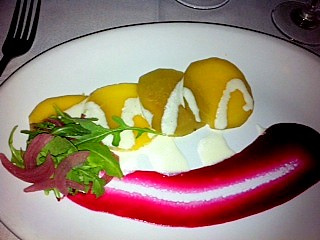 For the past couple of years, we’ve enjoyed locally grown New Jersey produce and other local products at the annual Farm to Fork restaurant event sponsored by South Jersey Hot Chefs. Held each summer, the event provides participating chefs in the Burlington, Camden and Gloucester county areas to strut their culinary stuff and showcase local food producers at the same time. The South Jersey Hot Chefs website lists the participating restaurant, so you can peruse menus through links to the websites of member restaurants. Dinners are priced at either $35 or $25, and typically include 3, 4 or even 5 courses. Many of the locations are BYOB, so you can tote along your favorite wine, too,

We decided to rustle up 8 of our friends and head to Elements Café in Haddon Heights for their 5 course Farm to Fork menu. Now, 5 courses sounds like a lot, right? Luckily, our tummies were sated but not groaning, since Elements right sized the portions to a small yet satisfying amount.

I started with the Shrimp Cocktail, which consisted of 3 plump shrimp with lemon cucumber and radish. The crisp radish and the lemon/cucumber added up to create a very clean and fresh taste. The other choices were a Farmer’s Vegetable Eggroll and Lamb and Chorizo Croquettes. We were equal opportunity grazers, since each of these dishes made their way to our table and were rapidly consumed 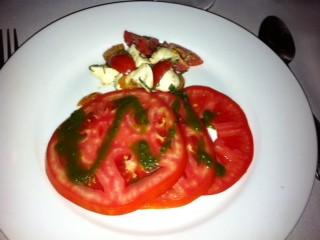 Next up was the soup course, where you got to try one of the New Jersey dynamic duo summer veggies: either Jersey tomatoes in an Heirloom Tomato Soup or sweet white corn in a Crab Vichyssoise with crab and green onion salsa (as John will tell you, one of the ways he won my heart years back was to serve me the year’s first Jersey tomatoes and sweet white corn on Fourth of July). Both soups were good, although I would have liked a tad bit of salt in the Heirloom Tomato Soup to bring out the flavor even more.

The third course choices were a Roasted Beet Salad with goat cheese vinaigrette or a Jersey Tomato Salad with fresh mozz and pesto. I could have made a meal out of either of these. Our group needed no encouragement to eat their vegetables when consuming these delicious salads! 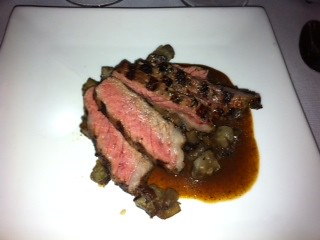 The main (fourth) course opened up a host of tantalizing possibilities: Sweet Potato Ravioli, Pan Seared Scallops with pickled yellow squash, Pan Roasted Salmon with heirloom eggplant puree and pepper slaw, Herb Roasted Chicken Breast with chili banana and black bean and Peppered Sirloin Strip with a purple potato hash.
I decided on the scallops, which were Jersey fresh indeed! Since they read the blog and know that our group meal would the subject of a future Jersey Bites post, my friends let me try some of the other options, all of which were outstanding. 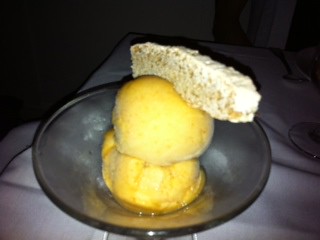 The final choice was dessert: the toughest choice of all. I was torn into bits over having to choose between a Vanilla Bean Angelfood Cake with a blueberry crush (you think the vanilla bean was from Madagascar, New Jersey?), a Peach Sorbet with cinnamon biscotti, or a Chocolate Truffle Brownie. Man, this was a tough one. John and I had spent the previous morning picking 20 pounds of blueberries at a location off of Route 70, so I knew how plump and yummy this year’s crop was. I love local peaches in the summer, too. In the end though, my love of all things chocolate (see previous review) won out, and I went with the brownie. It was sinful and rich-a perfect end to a great meal.

South Jersey Hot Chefs has a number of special themed events during the year. Elements Café has special dinners as well: . I noticed that they have upcoming Feast in the Field Events, where dinner is served at a local farm whose produce is used for the meal-gotta love that! Chef Fred has also done demos at local farmer’s markets. Elements is located at 517 Station Avenue in Haddon Heights, NJ.