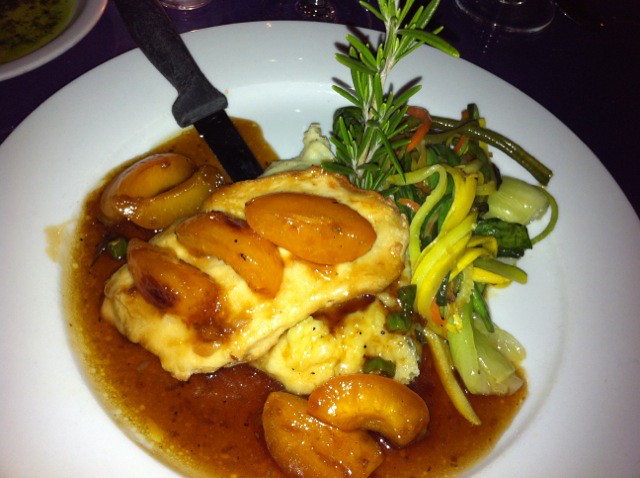 I have become quite the fan of daily deal sites such as Groupon. Daily deal sites post gift certificates for restaurants, massages, and other fun things at a deeply discounted price. If enough people buy the deal of the day, everyone gets the deal at that price. The deals change daily-I have purchased a couple of the restaurant deals, as well as a chocolate lover’s tour of Philadelphia which my son and I will take when it warms up a bit. The deals also vary depending on the geographic area that you are in-and if you have an upcoming vacation, you can sign up for deal notifications for that location, too.

John and I recently purchased a Groupon for A Little Cafe in Voorhees. It is a casual little jewel box of a place with really good food. They have a three course prix fixe menu for $35, although you can order a la carte as well. Since our previously purchased Groupon was for $35, we were halfway towards paying for our meal when we walked through the door. A Little Cafe does not have a liquor license, but you are welcome to bring your own wine or other libation.

We started our meal with Baked Brie. The Brie was full of warm gooey goodness and was topped with a mix of berries. The berries gave the appetizer a nice visual and taste contrast. Next, John tried the Caesar Salad, while I opted for the Wild Mushroom Soup. Both were tasty and filling.

Each of us ordered different entrees. John noticed that they has sushi grade tuna as an appetizer, and when he asked, our server cheerfully agreed to bring him an entree size portion. The tuna was served on top of a delicious bed of pasta with field greens and was attractively presented in a fanned style. I opted for the Apricot Chicken. It was a treat to have a fruit based entree in the winter, and the apricots and slightly sweet sauce made the chicken moist and flavorful.

We really enjoyed our meal at A Little Cafe. The food was well-prepared and was presented in a very attractive way. Best of all, our purchase of a Groupon inspired us to try a new restaurant at a discounted price-not a bad way to spend a chilly winter’s evening!