Like a fine orchestra, the volunteer staff at the One Table Cafe came together in perfect harmony to conduct a marvelous dinner for the Princeton community. The symphony of chaos was arranged to get 160 meals to the table hot, fresh and delectable.

“The food was delicious, everything was hot the way I like it,” said Yvonne Rice of Ewing. “The wait staff was phenomenal.” The food was donated by local restaurateurs, the Momo brothers who own Mediterra Restaurant and Teresa Cafe in Princeton, Eno Terra in Kingston. The chef and cooks from their Mediterra restaurant in Palmer Square in Princeton, did the cooking and preparing for the evening. Another Momo establishment, the Princeton-based Witherspoon Bread Company, provided all the baked goods for the evenings.

The One Table Cafe is the brainchild of the outreach committee of Trinity Church on Mercer Street as a way to reach out to the community, particularly those who might not be able to afford to eat out at any one of Princeton’s great dining establishments. The idea of “pay what you can” was reinforced with envelopes handed out at the dinner for payment.

“The concept of a Community Restaurant is meant to reach out across the various social, denominational and economic divides and bring people together,” said Meg Novins Hanington, one of the dinner organizers. “Feeding is such a basic and spiritual need that it seemed like the perfect area to devote our energy. Plus there was nothing like this in the area.” 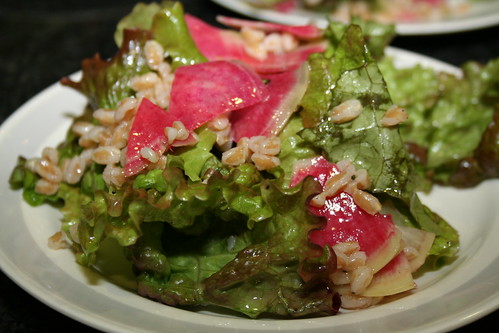 The food never seemed to stop throughout the evening. There were three kinds of dip–Baba Ganoush, hummus and black bean on the table in addition to olives and a cheese and cured meat plate. Next, a white bean spread with a roasted pepper bruschetta was served, then a Watermelon radish and Farro salad tossed with sherry vinaigrette. The main course was a salmon entrée with sweet potato puree and a golden raisin sauce. Dessert was cookies and an apple tartine with apple cider caramel.

As many local ingredients as possible were used, including greens from Terhune Orchards in Princeton and cheese from Cherry Grove Farms in Lawrenceville.

“Our goal is to give people a great night out with restaurant quality food, served with dignity and some style.” said Ms. Hanington.

As a working reporter, I didn’t get to sample everything, but what I did get to taste was divine.

The farro in the salad was pleasantly chewy with a barley-like texture and slightly nutty flavor. I don’t like radishes, but the hot pink watermelon radish beckoned me with it’s brilliance and I dove in. It was sweet and mild, the opposite of it’s regular cousin, I think I could have eaten a plate of those alone. The vinaigrette was well-balanced and mildly tart. When it appears on the menu, I will be having it for lunch at Mediterra. It was DELISH!

The apple tart was good with a yummy almond crust, but the apples could have used more cinnamon for my taste. The caramel was well-cooked and rich in flavor.  I could have had a pot of it. The double chocolate chunk cookies were divine, rich and super chocolatey-chewy.

One of the highlights of the evening was talking to the waitstaff, who were all volunteers from the parish.

“It’s fun to help other people,” said 11-year-old Anthony Momo, son of restauranteur Carlo Momo, who volunteered his time all on his own, giving up swim practice to help at the church. “It’s really awesome.” Dr. Cornel West spoke after dinner. Dr. West is Class of 1943 University Professor in the Center for African American Studies at Princeton University, has published 21 books, including his latest, “Brother West: Living and Loving Out Loud” and appeared as himself in the first “Matrix” movie.

He received a standing ovation when he was done with his speech and question and answer session, which lasted more than an hour.

Flower centerpieces, linens and dishes enhanced the warm atmosphere, which was filled with lots of laughter.

Piccolo Trattoria of Pennington will provide the food for the next dinner in February. Eno Terra and Teresa’s will be sponsoring other meals later in the year, according to event organizers.

Additional community dinners will be held on February 18 and March 18 at Trinity Church in Princeton and reservations are required and can be made by calling (609) 613-6950.

Victoria Hurley-Schubert, Regional Editor Mercer County, is a true Jersey girl. Raised in Marlboro, Vikki  has lived in the area her whole life. She loves to experiment in the kitchen and is happiest when feeding a houseful of friends and family. A journalist for 10 years, she now serves on the staff of the Princeton Packet. Vikki is happiest on the road, so it should be no Surprise she is a travel agent specializing in Disney destinations.   Follow her on Twitter @vikkihs.