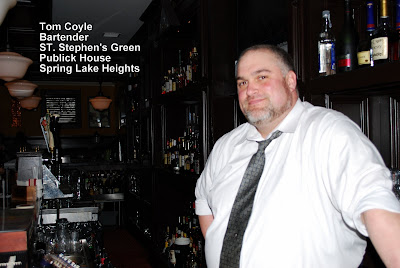 I was struggling with this article for days and I could not put a finger on why, until I read the first line in Peter Genovese’s article on Irish Pubs in Inside Jersey. “If there’s any food that gets less respect than Irish food, it hasn’t been invented yet.” And, that is why my search for good Irish grub was going to be a challenge.

I’ve always considered myself part Irish. I am part of a lot of things, actually. (Evidently my ancestors really got around.) Genovese’s article states that there are 1.3 million people of Irish decent in New Jersey. Only Italians out number the Irish. So, Saint Patty’s Day is a big deal here in the Garden State for good reason.

I’ve already got my Corned Beef waiting in the fridge as I am sure many of you do. We all know by now that Corned Beef is not an authentic Irish dish, right? If not, I hate to burst that shamrock shaped bubble of yours, but corned beef is an Irish-American dish, invented here in America. According to History.com, at the turn of the century “Irish immigrants living on New York City’s Lower East Side substituted corned beef for their traditional dish of Irish bacon to save money. They learned about the cheaper alternative from their Jewish neighbors.” Oh, who the hell cares anymore? Just wear green, eat corned beef, drink a good pint or two, or three and have a good time is what I say. I told you I was part Irish. 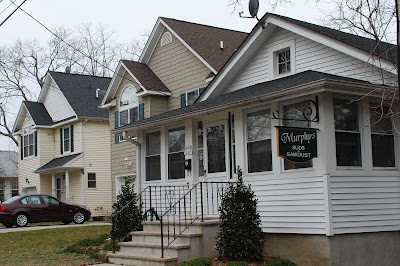 Here in America, when I was much, much, much younger, we would frequent a tiny place in Rumson called Murphy’s Tavern. Murphy’s Tavern, as you can see here, is in the basement of a little cape cod style house on a residential street. At that time (I hear things have been fancied up) there was a dart board and a shuffle board and a bar. The shelves of liquor were lined with tin foil. The owner and bartender was Mary Murphy, a tough little old lady who would reprimand anyone in the bar if they used curse words. Now, to me, that’s a neighborhood pub. There was a Crockpot of chili on the bar and frozen pizzas cooked in a toaster oven. Not exactly great Irish grub I’m afraid, but we didn’t care. I was happy to see Murphy’s is still there even if it has been fancied up.

Okay, on to our tour of Irish Pubs and restaurants. Yesterday, for the sake of “research,” I decided to visit a few Irish establishments here at the Jersey Shore. We’ve got a very large population of Irish folks here. Actually, Spring Lake is known as the “Irish 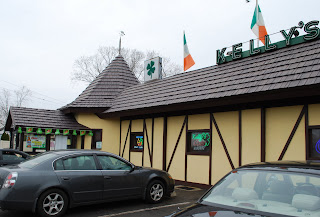 Riviera.” Consequently, we have a boat load of bars and restaurants that call themselves by Irish names, Kelly’s, Pat’s, Donovan’s, Klee’s, Farrel’s, Branigan’s, and the list goes on and on. But, which restaurants can you count on for really good Irish food?

We started out at Kelly’s Tavern in Neptune City. Kelly’s is known for their enormous Reubens. I’ve never been a huge fan of Kelly’s. It’s way too loud and packed for me. So obviously the place has fans right? Forget getting in on Saint Patrick’s Day or on the day of the parade in Belmar. 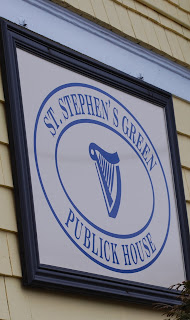 Our next stop was St. Stephen’s Green Publick House in Spring Lake Heights.  The interior is divided into smaller rooms with fireplaces that open to the main room and bar area, which gives it that pub ambiance. All of the furnishings, including the bar came from Ireland. The bartender, Tom, who you see pictured at the top, is the perfect host behind the bar, friendly and charming always ready with recommendations and a good story. We started our meal with the Lamb Sliders. Not really traditional but absolutely delicious. Lamb is huge in Ireland, so that was good enough for me. The sliders alone are reason enough to make the trip to St. Stephens. Next in line was either the Shepherd’s Pie made with ground beef and lamb (which impressed me) or the 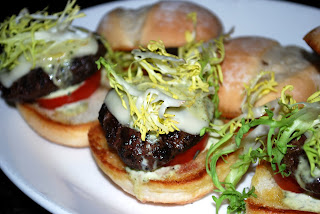 Fish and Chips. Since I had just had my fair share of Reuben at Kelly’s, I opted for the Fish and Chips and it did not disappoint. The Cod was moist and flaky and the batter was not greasy at all.Of all the Irish establishments here at the Jersey Shore, I can honestly say, St. Stephen’s is a breath of fresh air and a must visit. It’s still a bit shiny and new, but give it a few years to get worn in by the local patrons and you’ll have a true neighborhood pub. (I’ve included some more pictures of their dishes at the end of this article.)

Our next stop on out tour down the shore was The Irish Rail in Manasquan. Located 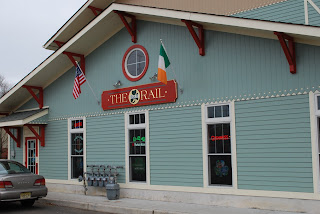 practically on top of the Railroad tracks, this restaurant is the smaller sister to Farrel’s in Point Pleasant Beach and Connelly Station in Belmar. Since I’d been to both of the big sister restaurants, I already knew what to expect when it came to the menu. Since there was no way we could eat another bite, we just stopped in for a drink and to check out the place. The Railside is small which is good for that pub feel, but lacks the charm of ST. Stephen’s. The bar tender offered very little in the way of conversation. We actually had to ask for menus. The guys drinking around the bar were drinking Miller Lite in large plastic cups. When I saw that, I thought for sure that my beer snob companion was going to turn around and walk out, but I was relieved to see they did have glass beer glasses for his Sam Adams Boston Lager. The Microbrew selection was very limited, but they do offer the standard trio of Irish Beers: Smithwick’s, Harp and Guiness.The one pleasant surprise we found is that the The Irish Rail serves breakfast including the very traditional eggs, bangers and baked beans. So, when our digestive tracks have recovered from today’s whirlwind tour, we will be back to sample the breakfast fare.

And that concludes our personal quest for good Irish Pubs and Grub in my little neck of New Jersey. Below are the suggestions I got from readers from all across New Jersey. I hope you will leave your comments on the places listed or suggestions for places we have not mentioned. Whether you are Irish or not, St. Patrick’s Day is a great way to celebrate our Country’s melting pot heritage and to enjoy the company of neighbors and friends. So, Happy Saint Patrick’s Day Everyone.

Dublin Pub, Morristown, NJ: The owners came over from Ireland in 1959. They also own Molly Malone’s in Whippany. Known for good Burgers. 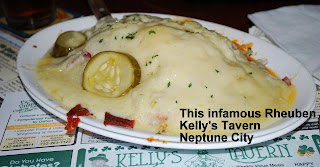 Nellie’s Place, Waldwick NJ: According to Tommy from Tommy:eats. “Nellie’s isn’t an Irish pub per se, but they proudly fly an Irish flag, pull a helluva pint of Guinness, and certainly have that friendly Irish pub ball-busting attitude. ”

McGovern’s in Newark, NJ – It’s not fancy, but they have reasonable prices, “g

ood fish & chips” according to one of my Twitter friends and it used to be a speakeasy… (Note: I can’t find Fish and Chips on their online menu, so call ahead.)

O’Nieal’s in Hoboken not exactly authentic Irish grub, but they’re known for their burgers.

The Auld Shebeen in Whippany: When I heard the place was in the Mariott I really had my doubts, but the food and atmosphere get very good reviews, especiallythe Irish Meatloaf, Guinness Beef Stew, Shepherd’s pie and bangers and mash. 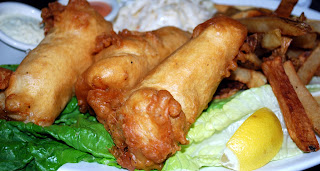 Tumulty’s Pub in New Brunswick: Opened in 1937 as a Tavern. In 1964 they turned it into a restaurant. Their signature dish is a wedge of lettuce with Blue Cheese dressing. Sounds like Irish fare to me.