If people are shying away from dining out and staying home because of the lousy economy, you wouldn’t know it at The Cabin in Freehold. When Peter and I pulled into the parking lot, I was a bit concerned. I can’t remember the last time I saw so many cars in the parking lot of a restaurant, and, you see, I am not good at waiting. I do not, can not, wait for a table for more than 10 minutes. Those people at Outback Steakhouse always amaze me with their vibrating whosie whatsies (I almost called them vibrators, but thought that might conjure up a strange image) standing in the entrance waiting and waiting for chain restaurant food. When I used to go to Outback, I was the one who would zip past the line and eat at the bar or turn around and heads somewhere else.

So, when I saw the cars, I was worried this was going to be a nightmare. Now, I’ve never been to the Cabin and from the outside, well, it looks like 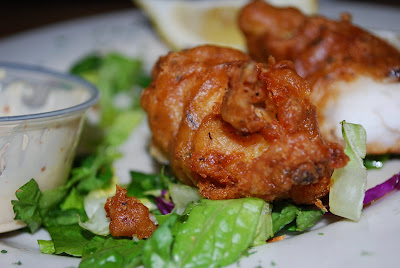 a log cabin (so ironic). What you don’t realize from the outside (in the dark) is how big the place actually is. There were still some patrons waiting to be seated when we walked through the front door, and the first bar was a mob scene, so we cruised past and found the only two seats available at the second, very large bar. (There’s something strange about a log cabin with 15 flat screen TV’s, don’t you think? Not exactly kickin’ it Little House on the Prairie style, if you know what I mean. Just a thought.)

Anyway, I digress. Peter and I were meeting some friends from High School to “plan our reunion” which we later decided was just an excuse to get together over cocktails. I only had a chance to sample two of the appetizers and the one you see pictured here was a real winner. Fried Monkfish served with a Horsradish dipping sauce, delicious. We also ordered the Onion Rings which I thought were a little too breaded, but that didn’t stop me from eating half the basket. I was disappointed that they had taken the “Pepper Rings” off the menu which sounded really interesting.

This place is casual with a capital “C,” sweatshirts and baseball caps galore. It looks like a great family place during the week and they also offer live music Thursday, Friday, and Saturday nights. From the looks of things, the Pizza seemed a popular menu choice. I have also been told they do a very good steak. We’ll have to get back there on a week night to give the Cabin another go and I will update you on our experience.