I’m thrilled to introduce you to another new contributor to JerseyBites, Vanessa Druckman. Vanessa is a fellow mommy blogger on NewJerseyMomsBlog and has several of her own blogs which I’ve listed at the end of this article. This is her first restaurant review for us and I think she did a terrific job AND with her kids in tow. You are a better woman than I, Vanessa. 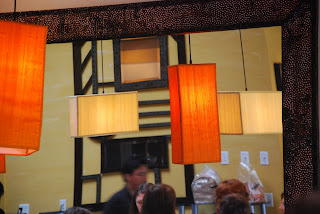 Wild Ginger in Ridgewood lives up to its motto, “Asian Fusion at Its Best.” The atmosphere is hip and the food is delicious. You can go traditional here with Pad Thai, Chicken Red Curry, or Pork Lo Mein, or you can sample some of their custom dishes such as Scallops with Mild Mango Sauce or Crispy Red Snapper. They also have a full sushi menu and it should not be an afterthought because the sushi is fresh and excellent. 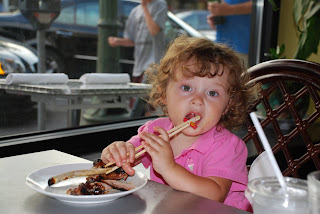 Tonight was our third dinner at Wild Ginger, but our first with the kids. We went early because it is quite trendy and I would not inflict our monsters on the regular clientèle. The waitress and the host were very friendly and welcoming, bringing child-friendly chopsticks and water cups with lids without being asked. Our food came quickly and was loved by everyone at the table, from the baby to the daddy. We had barbecue ribs that fell off the bone and were sweet without being cloying – we all fought over the last “bone”. The chicken satay had a light caramel curry marinade – it sounds strange but it was excellent. They were wafer thin and disappeared in an instant. I enjoyed a spicy tuna tartar served on salty Pringles with a dollop of caviar on top. 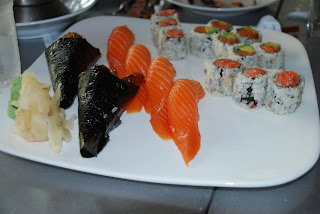 For entrees, we split some sushi while the children ate Chicken Pad Thai and Chicken Fried Rice. The sushi was extremely fresh and copious. The fish pieces were large with a small mound of rice on the bottom. It was a good combination – I hate sushi pieces that cannot be consumed in one bite, leaving you with a mess of rice on the plate. The salmon, in particular, was beautiful. I tasted the Pad Thai and the Fried Rice – the chicken was in a flavorful sauce and the rice and noodles were seasoned so that I enjoyed it but it did not put off the kids. 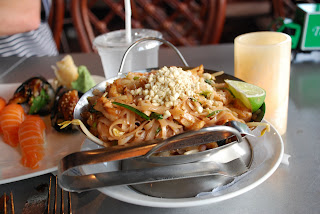 During previous dinners, I’ve also had the Scallops in Mild Mango Sauce, the Crispy Red Snapper and the Duck Fajitas Asian Style. The Duck Fajitas were a disappointment – the duck was dry and bland. The Scallops were a delight – I wanted to lick the plate to not leave any mango sauce behind. The snapper was also memorable – the fish was perfectly cooked and the sauce was delicately sweet yet spicy.

Like most places in Ridgewood, this is a BYOB – but it’s a BYOB with attitude. There is one large communal table in the middle with many other smaller tables around. You can also choose to sit at the sushi bar or in the back room that is a bit quieter. The banquettes around the walls are clothed in a colorful Asian pattern that is nicely accented with orange lanterns strung around. It’s so rare to find a place in Ridgewood that has both atmosphere and good food – and it’s great to know that we can even go with the kids during off hours – but I’m not sure I want to ruin such a great date nightspot with memories of spilled rice.

I’m Vanessa Druckman aka Chefdruck. I’m not a chef, as my online name suggests, just a huge food aficionado. I love to cook and to eat out, and then to write about it. I’ve lived in Northern NJ for a little over four years, I’m a transplant from the big city. I am half-French and spent a big part of my childhood there, so as a result, I have no fear of cream and butter. I’m thrilled to be a contributor to Jersey Bites!