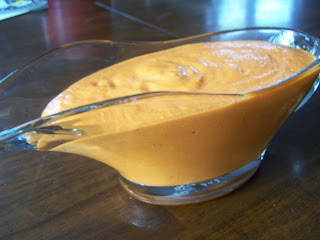 Now, I love Bobby Flay. I like his rough around the edges, New York ‘tude and all his recipes sound delicious. Unfortunately, they are also very involved, most of the time. When every single recipe contains recipes within recipes, as with the Mesa Grill Cookbook, it all becomes a little more than this home cook wants to tackle. For example, the Grilled Asparagus and Goat Cheese Quesadillas with Tomato Jam and Cilantro Yogurt. Sounds fabulous, right? But, when you realize that you need to make Tomato Jam which takes over a half an hour and you need to whip up some Cilantro Yogurt in addition to making the actual Quesadillas, whoa, where’s my sous chef, Bobby?

With that said, there are some really interesting recipes in the book and gorgeous pictures. Like I said they are a little too involved for me, but if you like to challenge yourself in the kitchen, you will probably love this cookbook. There are several I am going to try to modify to fit my lazy butt. This past weekend I was making stuffed mushrooms for a party and modified his Crab Cake recipe for the stuffing. It was a hit, so look for that recipe in an upcoming post.

My favorite section of the book is the section on sauces. Practically every recipe in the book is served with at least one sauce, many times two. So, I decided to try what Bobby describes as the “work horse” of the Mesa Grill; The Smoked Red Pepper Sauce. And I must say, it is delicious and very easy to make. Since I whipped this sauce up last week, we have served it with fish, steak and chicken. Oh, and as a dip with some mini tacos. He isn’t kidding when he calls it a “work horse” sauce. So, here’s the recipe and I encourage you to give it a try. I bet you could make a really cool pizza with this too. Hmmmmm. We also tried the “Mesa Grill Steak Sauce” from the book which incorporates ketchup, horseradish and chili powder among other things. It did not appeal to me as a steak sauce, but I think it will be unbelievable with Grilled Shrimp. More on that in another post. 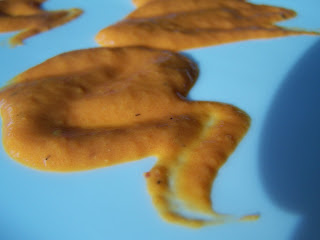 Bobby says the sauce can be made one day in advance, however, we’ve been using it for a week and its still just as good as the first time. I did finally toss the rest. It makes approximately 2 1/2 cups.

Empty the contents of a can of chipotles in adobo sauce into a food processor and process until smooth. Chipotle puree will last up to a month in the fridge because of the vinegar in the adobo sauce. I’ll try to come up with another recipe using this for Jersey Bites within the next month.