You’ll find many topics to savor when it comes to contemplating the pleasures of New Jersey diners, such as history, food, and architecture. And now here’s one more perspective to consider: the diner as part of the Garden State’s transportation “foodway” folklore tradition. 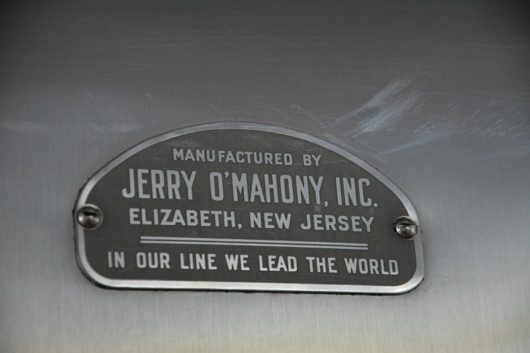 Diners will be part of the conversation at New Jersey Folk Festival (NJFF) (njfolkfest.org), which will be held Saturday, April 30, 2022, on the New Brunswick campus of Rutgers University. The event will showcase the theme “On the Move: Transportation and Migration.” As indicated on the website, transportation, migration, “life in motion”—and the foodways that nourish those activities—are all central to New Jersey’s “folk life” as a transportation hub.

[Full disclosure: This reporter is a member of the NJFF’s executive board.]

Emily Soper, a senior at Rutgers University and part of the student administration team for the 2022 NJFF (the public relations and social media intern), focused on this theme during a brunch rendezvous in early December at Tony’s Freehold Grill. This spot is a vintage, factory-built, stainless steel gem manufactured by Jerry O’Mahony. But first, it was time to eat: a western omelette with hash-brown potatoes, and a waffle topped with fresh berries and bananas. Delicious.

Diners were beacons on the foodway routes that sustained New Jersey’s coming of age in the 20th century. They employed immigrants from Greece and other European countries, Mexico, India, the Middle East, and beyond. Those immigrants brought with them their ethnic traditions, handed down from one generation to the next. Folklore, as an academic field, includes the study of food, culture, and the movement of populations, so diners fit the definition.

The historian John T. Cunningham, in his 1966 book New Jersey: America’s Main Road, wrote that by the mid-1930s, the state enjoyed a nationwide reputation for good highways, which catalyzed commerce and industry. This superior infrastructure spawned the growth of diners, enticing hungry motorists with friendly service and fresh, affordable American comfort food.

“No state carried a greater volume of traffic on its transportation arteries,” Cunningham wrote. “By the time the automobile had begun to take over the pathway between New York and Philadelphia, New Jersey was dubbed ‘the Corridor State.’” More cars meant more potential diner customers. Wheels turned and appetites grew stronger in the Diner Capital of the World.

This reporter, in the 2019 book Stories from New Jersey Diners, wrote that there was an upsurge of mobile, car-happy Americans during the post-World War II years. This was the period of a rapidly expanding middle class, suburban sprawl, interstate highways, bowling alleys, drive-in theaters, rock and roll, and the formative days of the baby boomers. “Teenagers and twenty-somethings drawn to the romance of the open road inhabited diners on their journeys, which fed their wanderlust. Truck drivers had comfortable way stations to park their rigs and enjoy a good meal and friendly conversations.” All this is part of diner nostalgia and mythology.

For the last 130 years, diners (and lunch wagons before them) have been sanctuaries for New Jersey memories. They hold the “ordinary” chapters of daily life that are far from ordinary. There’s nothing ordinary about having a cup of coffee with a friend you haven’t seen in 30 years. As a proud Jersey Girl, Emily recalled going to diners with her family and high school classmates—fond remembrances that continue to inspire her.

Next time you’re sitting in your favorite diner, chowing down on eggs, or waffles, or a burger and fries, or Taylor ham/pork roll, or pie a la mode, stop and think about how you are part of New Jersey’s grand transportation/foodway tradition. Diner stories, handed down generation to generation, are part of the Garden State’s folklore and history.

(The New Jersey Folk Festival is a major cultural event that draws thousands of people, featuring music, crafts, food and educational workshops. Unfortunately, Rutgers University was forced to cancel the festival during the last two years due to concerns over Covid-19, but the hope is it will be reactivated in 2022. Angus Kress Gillespie, a Rutgers professor and author, founded the NJFF in 1975. Maria Kennedy, Ph.D., is the administrative director for the NJFF and serves as a teaching instructor at the Rutger’s Department of American Studies. Elena Rossi is the president of the NJFF’s executive board.)