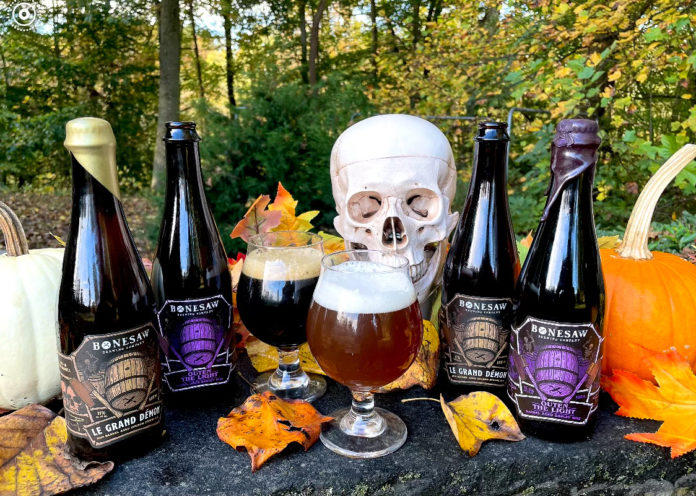 Halloween is here and it’s time to face our biggest…beers. Monsters lurk in tap rooms and haunt bars all over the Garden State: big beasts bursting with flavor and a bad attitude. These denizens of the dark might not be hiding under your bed but they are indeed out to get you. They’re there, in the back of the refrigerator, lurking in the dark corner behind those pilsner cans leftover from the summer. Beware.

Bonesaw Brewing in Glassboro backs up its sinister name with some downright terrifying beers. Outen the Light is an evil 15.3% ABV Barleywine composed of a half-dozen malts and aged in rye barrels. Lights out indeed. Ominous Synth music should be backed up by the sounds of a Gothic pipe organ. This 13.3% beer was two years in the making. That was time well spent for this Old Ale as it aged in sherry/single malt whiskey casks. If you can slay that demon, another one awaits you. Le Grande Demon (11% ABV) started out as a sunny Belgian Golden Strong Ale flavored with local honey that turned to the dark side in Jamaican and South American Rum barrels.

Speaking of demons and the dark side, Collingswood is home to Devil’s Creek Brewery where you can scare up a 9.5% ABV Imperial Stout named, appropriately, The Dark Side. For the true Dante’s Inferno experience, Holy Mole is a spicy Belgian strong ale with cocoa and cinnamon, which packs a punch at 9.3% ABV.

The devil appears in many forms. Here in New Jersey we have our very own form of devil. Mother Leeds’ cursed 13th child is said to still haunt the Pine Barrens. In fact, you just might catch a ghastly glimpse of the Jersey Devil after a pint of 13th Child Brewery’s Dizzy Double IPA (10% ABV).

Sometimes living the dream can be a nightmare. Spellbound Brewing, in Mount Holly, created Living the Dream?, a big, dark, bourbon barrel aged imperial stout that’s rich, dark, and roasty. This dream sequence takes a turn with the addition of Crispy Hippie blend coffee from Small World Coffee in Princeton. At 11.5% ABV it will haunt your dreams, too. And whatwerewethinking? (10% ABV) is a barrel aged barleywine that might have you question your sanity. This deep amber gem with fig and vanilla notes could give you the courage to open that basement door when you know damn well what’s down there.

Let us continue on in the realm of the ethereal. Departed Soles, Jersey City, conjures up Wiggle Wiggle Wiggle. Billed as a Mexican cake barrel aged imperial stout with 12% ABV, Wobble Wobble Wobble might be a more appropriate name. That cute little Corgi pup on the can seems so innocent but I’ve lived with one. They’re devious.

The final stop on our beery trick-or-treat run is Ghost Hawk Brewing, in Clifton. Good Boy Stout is the perfect companion to that pirate costume you’ve been putting together. It’s another big Russian Imperial Stout (12%) but this one is aged in Jamaican rum barrels. Available in bottles at the brewery, a portion of the proceeds from each sale go to help the Brewery’s furry companions at the Clifton Animal Shelter.

Please confront these monsters responsibly and safely this Halloween.