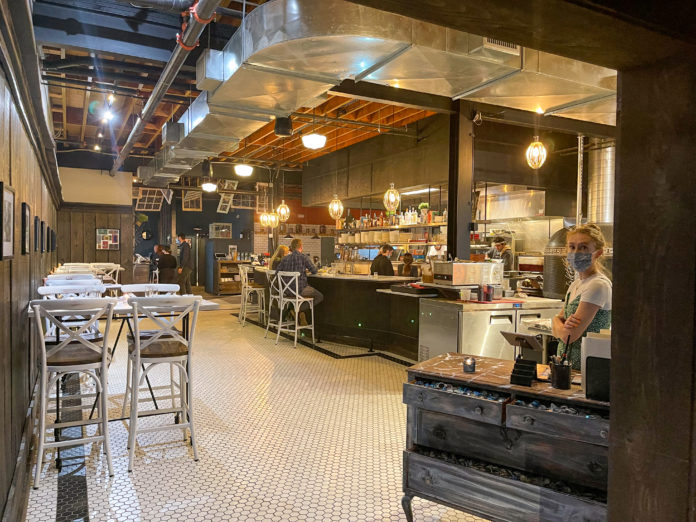 The writer was invited to visit Belmar Kitchen and the meal was complimentary.

The witbier is hopped with Hallertau Blanc, which gives this beer a distinct white wine character. It makes for a classic white wine-and-seafood pairing. The beer offered a touch of citrus, which cuts through the buttery crostini and refreshes the palate for each next bite. And the dish had a nice, spicy component from the jalapeños, which worked well with the rich wheat malt of the beer.

IPAs can be tough to pair with food. Freeworld, which is hopped with Citra, Cascade, and Mosaic, leans toward the bold bitterness of a West Coast-style IPA. Chef employed a push-pull strategy when he paired this beer with roasted heirloom carrots and sprouts. The sweetness in the carrots helps pull out the malt background of the beer to even out that signature IPA bitterness. Then the touch of sriracha honey in the dish pulled that bitterness back out again.

Lite Haus is a crisp pilsner that has a slightly earthy note. It played the role of supporting actor to the perfectly prepared salmon. This is a rich dish and the Lite Haus scrubs and preps the palate for each next bite. I might have been tempted to pair the witbier with this, but it would have competed for more attention. It is best to let the salmon stay in the spotlight here. Chef lovingly referred to this dish as his “deconstructed lox and bagel.” Everything bagel seasoning tops the fish, which is plated with cucumber-tomato farro, Za’atar Labne, and capers. It was a real winner, and probably our favorite dish of the night. We even recommended it to people seated next to us.

This big, sweet pecan porter dries out a little at the end in a peanut-skin kind of way. It’s definitely a dessert beer and these cheesecake pops are a spectacle of a dessert! That little touch of peanut skin dryness serves as a foil to the decadence of this dish. A chocolate stout would have pushed the whole thing over the edge.

This dessert is not something we would usually order, especially for just two people, but it is a fun way to do dessert (and is ideal for a special occasion). The cheesecake was surprisingly moist and was served with the most amazing housemade bubble gum whipped cream. We honestly did not taste any hint of bubble gum. It was just damn good, fresh whipped cream. 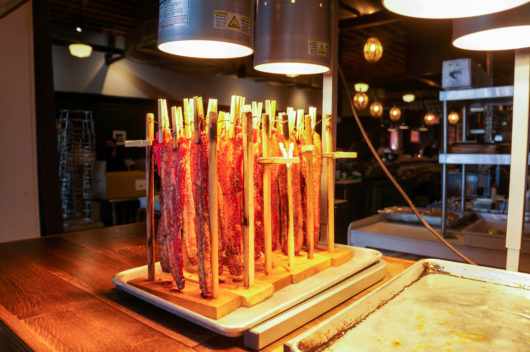 Black Pepper and Maple Glazed “Bacon on a Clothesline”

Belmar Kitchen‘s signature “bacon on a clothesline” was not part of our dining experience that evening but lucky for us, there was no escaping that aroma. The glowing bacon is the first thing that greets you as you approach the restaurant from the brewery. I have to give them kudos for coming up with the best possible bait for beer lovers.

Behind the tantalizing wall of bacon is the wood-fired pizza oven, used for the carrots and Brussels sprouts we enjoyed—as well as many other dishes on the menu.

The restaurant has an industrial-meets-beach vibe, with white subway-tiled walls and quarry-tiled floors in the bar area and whitewashed faux-wood tabletops in the dining room. Bright pops of orange and cobalt blue color the walls. The seating consists of a mix of banquettes, high-top tables along the windows, and standard four- and six-seat tables.

Many restaurants boast inspired tap lists, but few really understand how to set those beer options up with a perfect partner dish. It’s obvious that the Belmar Kitchen team understands that the right pairing can raise the enjoyment of both the food and the beer. That’s refreshing.