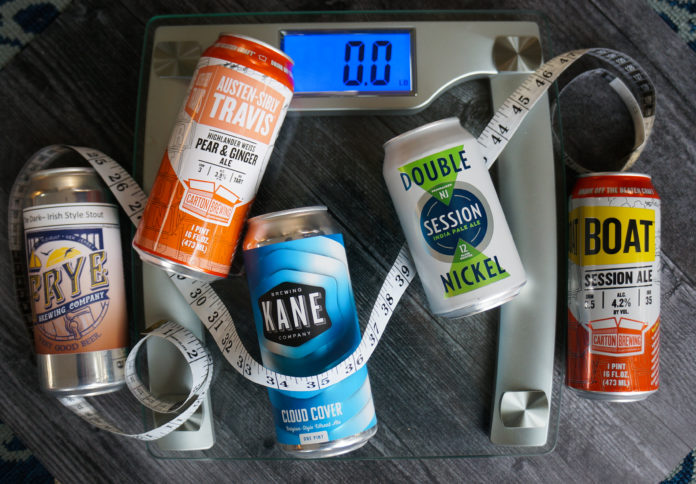 Everyone knows that the most common new year resolution is to lose weight. This is especially true in this year of COVID. I’m not one for resolutions, but in 2020 I packed on the pandemic pounds and it’s time to do something about it.

We have had to do without a lot of things this past year. For a while we didn’t even have sports. But what really hurts is that we can’t socialize in person. Zoom happy hours got old fast. That makes going on a diet that much more daunting. Go without more things? So long comfort food. No more potato chips or cookies. And don’t even think about beer!

Not Giving up My Beer

For me, beer is a ritual. My ex-father-in-law used to smoke a pipe. He spent more time fiddling with it than actually smoking it. And while he was particular about his tobacco, it was the ritual of the process that he enjoyed. So, selecting a beer from the fridge, finding the right glass and settling in to a comfy spot to drink it is a ritual I am not willing to do without. On a diet, it just requires a new strategy.

Calories in beer come from two sources: alcohol and carbohydrates. American light lager brewers typically add an enzyme to their brew that converts more of the malt starches into sugar. The sugar will be consumed by the yeast and create more alcohol. That lowers the carb count. Then, water is added to lower the alcohol level. The overall result: a low-calorie, low-flavor beer.

I want something with character; otherwise, what’s the point? Since craft brewers don’t normally use the carb-killing enzyme, there’s only one way to curb carbs. Limit consumption. That’s kind of a bummer but I can be just as happy drinking two beers as I am drinking three. The good news is that there is a wide array of beers that are low in alcohol, so reducing that part of the equation isn’t too painful or tasteless.

IPA is my go-to style and no beer lover wants to give up on hops. For a big hop punch at a low alcohol level, Carton Brewing (Atlantic Highlands) Boat beer is hard to beat. Grapefruit and citrus dominate the palate while the body is light and hazy. Carton’s flagship weighs in at 4.2% and punches above its weight in flavor. Boat is not really an IPA though. It’s unique.

For a true IPA experience, I go to Double Nickel (Pennsauken) Session IPA. It’s only 4.7% ABV but has the same mouth feel as a standard IPA. So many “session” styles are thin and watery. Not Double Nickel. It is well balanced and satisfies my IPA jonesing nicely. It doesn’t feel like a session beer at all.

On the Dark Side

It’s winter. Sometimes I want something dark and roasty. A big Russian Imperial Stout is going to blow my calorie budget out of the water. However,I can still take a walk on the dark side. Most people don’t realize that Guinness Stout only has a few more calories than an American Light Lager. That’s due to an ABV of only about 5% or less and its surprisingly thin body.

As a style, Guinness is a dry Irish stout. I found a very nice example from Frye Brewing (Point Pleasant Borough). Appropriately named The Dark, it clocks in at only 4.1% ABV and checks all of the boxes of the style. It goes great with chili!

From Berlin to Belgium

When it’s time to step back into the light, I enjoy a Berliner Weiss. Light, crisp, and a tad tart, Berliner Weiss is as interesting as a beer gets with an ABV of under 4%. The style is getting popular with craft brewers and is pretty easy to find. Carton’s series of Highlander Weiss (a nod to the town they’re located in) is a lot of fun. It says so on the can! The current version, Austen-sibly Travis, has a distinct white wine character which is great because I’m eating more fish. Belgian wheat ales are less tart, a little cloudy, and very food friendly. Kane Brewing’s (Ocean) Cloud Cover has the telltale banana or bubble gum hints and a little spice associated with the style. At 4.8% ABV, it’s a complex little beer.

I’ve been pleasantly surprised about the variety of flavors I can curate while I’m on a limited calorie count. It’s been a fun exercise and makes those big, juicy IPAs on cheat day that much better.