The upscale “farm and fishery to table” destination, which is serving fresh seafood, much of which is sourced from New Jersey, along with Jersey-raised produce, will host an official launch event on National Oyster Day on Wednesday, August 5, featuring pay-what-you-want oysters (limit 12 per person), with proceeds benefiting Black Lives Matter.

The restaurant’s menu is a love letter to New Jersey, utilizing Jersey-grown products such as fresh corn, heirloom tomatoes, Stormy Bay oysters from Cape May, locally sourced scallops, and more on a menu which Harmon credits his mother and grandmother for influencing.

“My mother and grandmother were the biggest culinary influences in my life, as they not only taught me how to cook, but more importantly they taught me that sourcing the best products that traveled the least distance to my plate often tasted the best,” said Harmon. Shell N’ Tail has adopted that philosophy, and it has become the restaurant’s playbook.

“Our cuisine is going to focus on what is trending, and what is popular and local to this restaurant,” said Harmon, who hails from Gouldtown, NJ, in Cumberland County, which is considered the oldest black community in the country. “This concept is about taking my New Jersey roots and elevating them to creating the best food we can serve to our customers.”

“Shell N’ Tail is about celebrating the best tasting ingredients from New Jersey and beyond, and utilizing them to create incredible food that’s both delicious and comforting. And who doesn’t want something comforting and delicious right now?!”

Harmon is joined by partners Howard Brunner, who is a Jersey City nightlife and restaurant veteran, as well as Brian Rosenbaum, a 30+ year executive in the event business and CEO of The Entertainment Company. Daniel Cummings, whose responsibilities include foraging and sourcing all ingredients, is chef de cuisine. “Daniel is one of the best in the business at finding delicious foods, and he’ll be sourcing everything he can find from New Jersey and nearby, from produce to proteins and everything in between,” said Harmon.

For now, the restaurant has 20 tables, with 50 seats, on an elevated outside patio beneath a massive awning, while only outdoor dining is permitted. Once COVID-19 restrictions are lifted, the interior will feature another 40 seats inside of a 1,500-square-foot dining room. The dining room includes a 15-seat centerpiece bar complete with a clawfoot bathtub for champagne, beer, wine and craft spirits display.

Manhattan cocktail veteran Chris Kearns, who was born in Peru, is the restaurant’s operations manager, while Mixologist Gianluca Cannarsa is bringing his expertise to the bar program with his comprehensive collection of locally distilled spirits, craft beers and “seafood-friendly wines.”

The interior will also feature whimsical murals by Marcus Gould, a local artist and muralist whose work can be found by visiting marcmoneyart.com.

“I think we’ve put together a pretty incredible team,” said Rosenbaum. “Darryl’s background and his talent in the kitchen will really elevate this restaurant as one of the best seafood destinations in New Jersey, and when you combine his menu with what Daniel is able to do with sourcing fresh, flavorful ingredients, I’m certain that we have a recipe for success.” 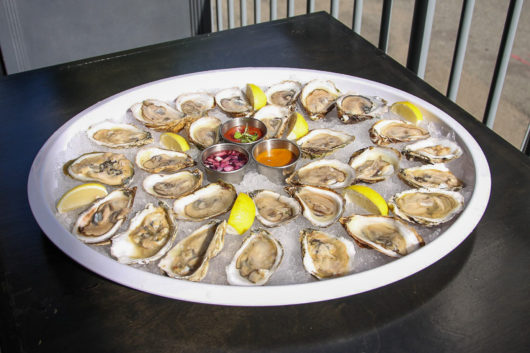 Harmon, whose own spice blend will be available for sale, said that the menu will also feature dishes that honor his family’s roots in Gouldtown, NJ.

“Gouldtown is such a significant part of the Garden State’s history,” said Harmon. “My ancestors were from there, I spent lots of time there, and there’s a clear connection between my roots, where and who I am now, and the food I cook. In Gouldtown, we used to split our hot dogs and fry them and add chili and coleslaw. Comfort food was always big there, especially chicken and dumplings, which I will introduce when the weather gets colder this fall.”

Harmon confits his chicken instead of baking it like his grandmother used to do, but rolls out dumplings and cuts them into squares just like she did. “I really love seafood, but I’m so excited to feature these types of dishes on the menu, as I feel it’s important to represent where I came from—a place I am very proud of, and a place extremely important to not only my family’s history, but African-Americans all over this country.”

Shell N’ Tail is open seven days a week for lunch and dinner, with weekend brunch launching in August. Reservations can be made by calling 201-724-4059 or by visiting the restaurant’s website. Learn more by visiting shellntail.com.