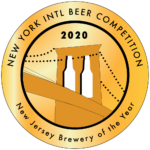 (NYIBC) includes over 600 beers from 14 countries across 30 categories. Along with the typical gold, silver, and bronze awards they also name a brewery of the year for each state represented. This year, the NJ brewery of the year was Zed’s Beer in Marlton.

Cofounded by Geoff Bado and Lori White, Zed’s Beer has only been around for two-and-a-half years. It’s a small storefront-type of brewery with a 10bbl system–recently upgraded from 5bbls. Despite such humble surroundings, Bado and White maintain a high quality product. “The NYIBC is known for its competitiveness and we are proud to be in good company in New Jersey, nationally and internationally,” said Bado.

Even the beers are small at Zed’s Beer. Of the 10 to 18 beers they usually have on tap, most are 5% ABV or less. However, small beer can actually mean big flavor when done right. “It speaks to the brewer’s skill,” said Lori White.

They’re pretty confident about that skill, too. For customers who can’t seem to decide on what they want, Bado will pick one for them randomly. “I wouldn’t have it on tap if I didn’t want you to drink it” he told me. I’m sure that maneuver has terrified more that one customer but Bado says that they almost always stay for a second beer,” he said. Zed’s Beer must be making good stuff! NJ Brewery of the Year kind of stuff.

The NYIBC judging panel—made up of restaurateurs, cicerones, sommeliers, retail beer buyers, distributors, and importers—seem to agree. Zed’s Beer hauled in gold for Zed’s in Ireland, a dry Irish stout which features bold coffee and bitter chocolate flavors coupled with a bone dry finish—all at less than 5% ABV. Zed’s in the Universe—Pale 42 scored a gold in the American Pale Ale category. Pale 42 is another sessionable beer starring Cascade, Centennial, and Amarillo hops. Fruity and floral, it’s great to contemplate or knock back a few.

Two other New Jersey brewers garnered gold for a couple of very big beers. Cape May Brewing’s (Rio Grande) Coastal Evacuation was so honored in the Imperial IPA category, while Eight and Sand (Woodbury) nailed one for their Mallow Joe in the American Imperial Stout category.

In the end though, it was the little guy who walked away with the big award: New Jersey Brewery of the Year. If you’re wondering where to get a taste of this award winning beer, well, you pretty much have to go to the brewery. Even their distribution footprint is small—at least for now.

Preorder and Pick Up

Note: During the COVID-19 crisis you can preorder (call 856-872-7632 or send an e-mail to takeaway@drinkzeds.com, website) and pick up beer at the brewery 7 days a week. I’d urge you to do this. If not Zed’s Beer, then go to your local brewer. Breweries are probably the cleanest place in town and they could sure use our help.