What is Hard Seltzer?

Canned, flavored alcoholic beverages are all the rage and one of the emerging categories is hard seltzer with a very positive outlook for the future. According to the Washington Post, sales of the boozy, effervescent water grew 169% to approximately $487.7M in 2018. That growth seemed to have continued over the summer 2019 and looks to still be going strong.

Hard seltzer is a low-calorie, low-carb alternative to beer and cocktails. The alcohol in hard seltzer is created through the fermentation of a simple sugar, which results in the beverage having little to no residual carbs or sugar. (Two Robbers uses cane sugar.) It’s a lighter option than beer, which is usually made by fermenting malted barley, a complex carbohydrate.

Philadelphia residents and twin brothers, Vivek and Vikram Nayar, started their careers in finance. Their entrepreneurial spirit attracted them to the hard seltzer category, which they saw as an opportunity to create something unlike any beverage product on the market.

After perfecting their lighter, healthier, no-carb hard seltzer recipe, their apartment was broken into. TWICE. One of the only things the burglars didn’t take—either time—was the seltzer recipe. The name and logo for Two Robbers was born.

Expansion into the New Jersey Market

In September, the brothers announced they would transition all production of Two Robbers to Yards Brewing Company’s new state-of-the-art brewery in the Northern Liberties section of Philadelphia. This partnership will allow Two Robbers to continue to grow in its home market while supporting Vik and Viv’s ambitious expansion plans.

After growing to over 300 locations in eastern PA, Vivek and Vikram implemented expansion plans into their second market: New Jersey. For a complete list of all outlets where Two Robbers can be purchased, CHECK HERE.

The alcohol in Two Robbers is made from 100% cold-fermented cane sugar (vs. corn, malted barley, or other ingredients) and a proprietary filtration process, which makes for an exceptionally clean seltzer base. The result is a one-of-a-kind hard seltzer with subtle and unique natural flavors from real fruits. 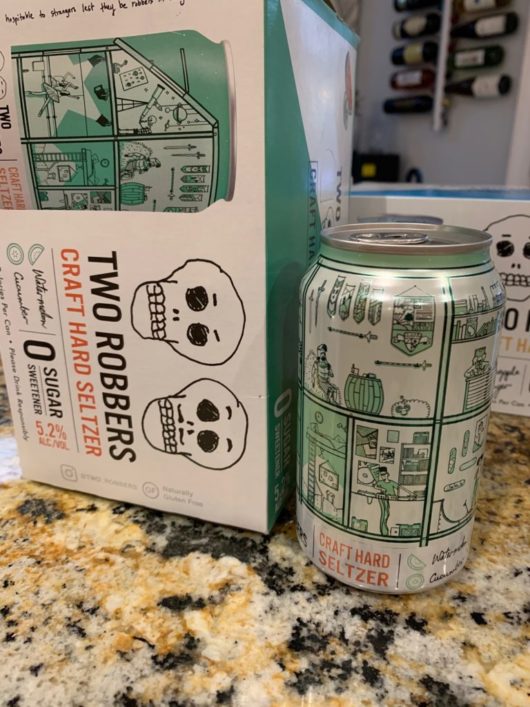 Two Robbers launched in Philadelphia in early 2019 with three flavors, each inspired by some of the brothers’ favorite craft beer and cocktail recipes.

I received samples to try and this is how I feel they measured up:

A word of caution for those of you who, like me, who drink a lot of sparkling water, these delicious and refreshing seltzers don’t taste boozy and will go down as easily as non-alcoholic versions of fizzy water.

Each 12-ounce can contains 5.2% ABV, 110 calories, zero sugar or sweetener, and is gluten free. More flavors and variety packs are in the works.

Born in a city known for its world-class beer scene, Two Robbers’ popularity with the locals clearly demonstrates there’s a need for lighter, healthier drink options—even in beer-centric cities.

Photo of Vikram and Vivek Nayar is courtesy of Two Robbers.