Halloween is upon us. New Jersey is chock-full of monsters, sprites, and things that go bump in the night. Why not add a few scary beers to your ghostly travels?

Kane Brewing – ANTEAD (A Night to End All Dawns)
Big, rich, and roasty, Kane’s famous imperial stout is the stuff of legends. The current version introduces strawberries, cacao, and vanilla beans to this bourbon barrel-aged bombshell. Clocking in at 12.4% ABV, it is not for the faint hearted.

Magnify Brewing – Flannel Season
Ever heard of a breakfast double IPA? Me neither. The addition of apple cider, fall spices, vanilla, and a dose of lactose make this a cozy fall treat.

Why it’s scary: A breakfast double IPA that packs an 8% ABV punch! How do you wrap your head around that? Maybe we should consult Lloyd.

Carton Brewing – SS2019
Carton’s latest installment from the “You’re going to need a bigger boat” series is their way of celebrating eight years of brewing great beer. It literally doubles down on Carton’s flagship Boat beer (8.4% ABV vs. 4.2% ABV). Who knew that Kolsch yeast could eat its way to that much alcohol?

Why it’s scary: Because great white sharks are terrifying. I’m not going in that cage, that goes in the water, where our shark is. Nope. Terror is not landlocked.

Bonesaw Brewing – Crimson Skull
Their own description of an aroma “like baking brown bread” is about as homey and comforting as it gets. This red-amber Vienna-style lager will play nice with just about any fall food options you can dream up.

Why it’s scary: It’s always the quiet ones isn’t it? We never suspected that mild-mannered red lager had murder in its heart, but with a name like Crimson Skull, we should have seen it coming.

Screamin’ Hill Brewing – Desperado IPA
Desperado is a copper-colored picture of balance and beauty. I really could have picked any of the offerings on tap. Screamin’ Hill is part of Bullock Farms, which dates back to 1860. Fall activities include hay rides, a corn maze, pumpkins, and the Bullock Barnyard which is perfect for kids.

Why it’s scary: If you want to try the beer, you’ll have to go to the farm. Some say that you can still hear the screeching sermon of a long dead preacher coming from the lonely church on the neighboring hill…

Actually, no one says that. You’ll be fine. Probably. 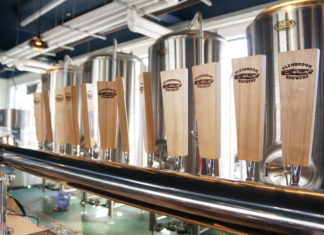 Peter Culos - April 14, 2021
As the team at Glenbrook Brewery can attest, you should never underestimate the power of a cheap malt extract home brew starter kit. These...

Grand Lux Cafe: A Go-To Restaurant for All Tastes and Styles