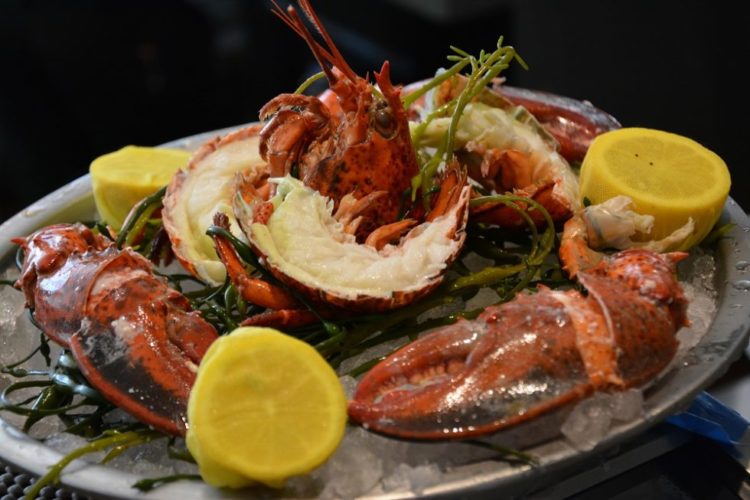 The writer was invited to visit Blue Morel and the meal was complimentary.

It was an easy-flowing, early summer evening at Blue Morel Restaurant and Wine Bar in Morristown as the merry Thursday evening happy hour crowd was in full swing, grooving on the sweet music of singer/songwriter Tiphanie Doucet. The gathering, dubbed Bourbon and Blues Night, celebrated the new look of the restaurant along with tastings of Slaughter House Whiskey produced by The Splinter Group.

The restaurant is part of the Westin Governor Morris Hotel. The news concerning Blue Morel is its interior design, which was unveiled during a reception on June 20. Richard Ramos, the general manager, said the restaurant’s warm green, brown and gray earth tones, simplified tablescape and settings, artwork, and soft lighting are all “designed to create a more, approachable, relaxed
environment. We wanted the restaurant to have a comfortable, informal look.”

A most gracious man, Ramos hails from Hoboken and has been with Blue Morel for 12 years. He said much of the restaurant’s energy revolves around the large, impressive bar, with its extensive collection of wines, whiskeys, spirits and brews, such as Ramstein beer produced by the Highpoint Brewing Company in Butler. As the happy hour hub, the bar serves sushi and a locally-sourced raw seafood bar.

Ramos is a keen observer of Blue Morel’s weekly customer demographics. He said special events, business groups, family celebrations and out-of-town guests dominate the scene on Fridays and Saturdays, while hotel guests and Morristown-area locals make up the majority of the clientele Monday through Thursday. As explained by Ramos, the restaurant’s name represents the bounty of the sea (blue) and earth (morel).

Executive Chef Dennis Mathews and Chef Thomas Ciszak preside over Blue Morel’s New American grill menu, which emphasizes farm-to-table cuisine. Mathews, who grew up in Somerville and graduated from the Pennsylvania Institute for Culinary Arts in Pittsburgh, in 1999, has an eye for subtle details to enhance the dining experience. For example, he gets fresh cream from a farm in upstate New York, which he uses to make his own butter.

Mathews is also a fan of New Jersey artisan Keiko Inouye and her pottery, often using her bowls and plates for food presentation. An Inouye bowl was used to serve Challah bread pretzels paired with homemade butter.

According Blue Morel’s website, Chef Ciszak launched Copeland (now Blue Morel) in 2005. Born in Germany, Ciszak trained at top culinary schools and restaurants in his home country and came to the United States in 1994. Lee Trilling serves as the general manager of the Westin Governor Morris.

Mathews is enjoying his second tour of duty at Blue Morel. Beginning in 2007 he worked at the restaurant (then known as Copeland) for a number of years, then left to pursue other opportunities.

This reporter and other media representatives feasted on the above-mentioned sumptuous dishes and everyone came away well fed and smiling. Service was friendly, attentive, and skillful. Dessert was a special treat, with a variety of colorful French-style macarons, displayed on the branches of a tabletop stainless steel tree—delicate, tasty, and light as a summer breeze. Dessert also featured a most satisfying plum cobbler with Tahitian vanilla ice cream.

Produced by The Splinter Group, Slaughter House Whiskey was on display throughout the evening. It’s 88 proof and matured for nine years with “additional mellowing” in “experienced” French oak wine barrels. The whiskey’s mash bill was listed as 85% corn, 8% wheat, 6% rye, and 1% malt barley.

As the night lingered, the soulful voice of the charming Ms. Doucet—who played guitar and was backed by a drummer and keyboard player—gently serenaded the Blue Morel patrons with selections by Norah Jones, Sade, and Corinne Bailey Rae. It was melodious way to end an evening of fine dining, fellowship, and cocktails in Morristown.