Although it’s one of New Jersey’s hippest towns, Red Bank has been a little slow in jumping on the good beer bandwagon. Red Bank Brewing was a short-lived affair back in the 90s and Basil T’s (now Birravino) started brew pub operations in 1996, but that was about it for a long time.

That’s all changed. Now there are two production breweries, two brew pubs, and a few great beer-centric bars and restaurants. The best part is, given Red Bank’s compact footprint, most of them are within walking distance of each other. Let’s take a stroll about town, shall we? 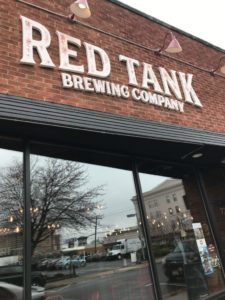 Red Tank Brewing: True to Red Bank’s reputation as a hip town, Red Tank Brewing is a hip brewery. It is very much a downtown brewery located in the heart of Red Bank just a block from the Count Basie Theater on Monmouth Street and right next to Jamian’s, which is another stop on our beer tour.

The atmosphere is more lounge than brewery but that doesn’t mean the beer is an afterthought. Owners John and Lovina Arcara are serious about producing beers that befit the decor. Case in point: their Chateau Saison, which is a delicate yet rustic Belgian farmhouse saison.

They are as comfortable with an approachable amber as they are thumping you with a hazy hop bomb or a dark, mysterious barrel-aged stout. Red Tank encourages you to bring your own food or order in. Elsie’s Subs, a Red Bank institution, is right across the street, too. How convenient!

Ross Brewing: A block over, on White Street, you’ll find Ross Brewing in the old Liberty Hose firehouse. What’s cooler than a brewery in an old firehouse? As of this writing (July 2019), they aren’t quite open yet but they are still perfecting their recipes, which will center on five core beers.

Lagers seem to be gaining popularity these days and their Shrewsbury lager is a nice affable example. A Belgian wit, a balanced IPA, a rye, and a porter round out the core five. They are all true to their traditional styles and make for a nice place for the craft curious to start. Having met owner John Ross Cocozza though, I know there will be offerings for the more adventurous palate as well!

Birravino: You just can’t talk about beer in Red Bank without including Birravino. It’s been a fixture in town since owner Vic Rallo and his father opened it in 1987 as Basil T’s. It remained Basil T’s until it was renovated and rebranded as Birravino in 2014. (Here’s our 2014 coverage of the reopening.)

Although beer is now part of the restaurant’s name (Birra is Italian for beer), it has been a big part of the experience since the spot became a brew pub in 1996. One of the state’s most revered brewers, Gretchen Schmidhausler, spent nearly a decade at the helm. She’s moved on and has her own brewery now (Little Dog Brewing in Neptune) but her legacy lives on in a great beer lineup.

If your dining partner isn’t into beer, it’s worth noting that Birravino is also dead serious about its wine list, and the upscale Italian cuisine is worth the trip alone. The atmosphere is sort of rustic-industrial and features an open floor plan. If the weather is nice, try out the recently added beer garden—or should that be birra garden?

Triumph: Triumph Brewing Company has been a fixture on the New Jersey craft beer scene since the very beginning—1995 in fact. That’s when the first location opened, in Princeton. It would take until 2018 for Triumph to finally open in Red Bank after a decade or so of rumors. It was worth the wait. The tap list features everything from a Belgian strong ale to an Irish mild, with all stops in between—including the signature Bengal Gold IPA.

The beer tends to stick close to traditional style guidelines, which are well executed and ideal for food pairings. That’s no accident. The menu is as well thought out as the beer. Sure you can have a cheeseburger, but how about pastrami spiced salmon or fava bean falafel? The space is large but still cozy. Triumph is a Red Bank winner! 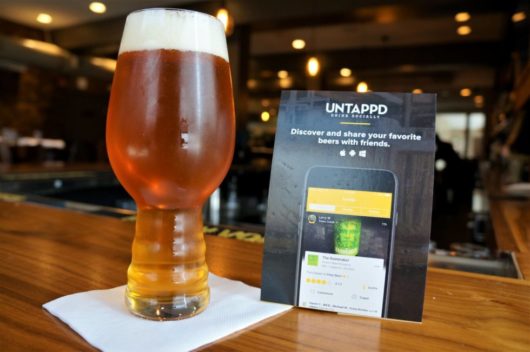 B2 Bistro + Bar: Known for a love of local craft beer and rotating taps, B2 Bistro is also the place to go for some really exciting food. Order a flight or take home a B2 growler of your favorite flavor. Check out what’s on tap before you visit on Untappd. B2 also offers a great happy hour and late-night menu, including an indulgent bowl of goodness, aptly named Rally Fries.

Jamian’s: It’s a joint with character. Jamian’s has that neighborhood bar feel but with a better tap list. You’ll find 18 taps and a pretty extensive bottle list—plenty to choose from. The food is thoughtfully crafted pub fare with a bit of an attitude. Why have a regular chicken burrito when you can dish up an Oaxaca burrito topped with a thick, rich Oaxaca mole sauce? Feel like a hot dog? The Danger Dog is a deep-fried, bacon-wrapped hot dog served on a baguette with a horseradish mustard spread and fried onions. That’s attitude.

Despite great beer and food, Jamian’s might be best known for its live music. You’ll find reggae nights there and local favorites like Pat Guadagno and Matt O’Ree also frequent the calendar. It may just be the most chill place in Red Bank.

Know of another great beer spot in Red Bank? Send us an email at info@JerseyBites.com to let us know!