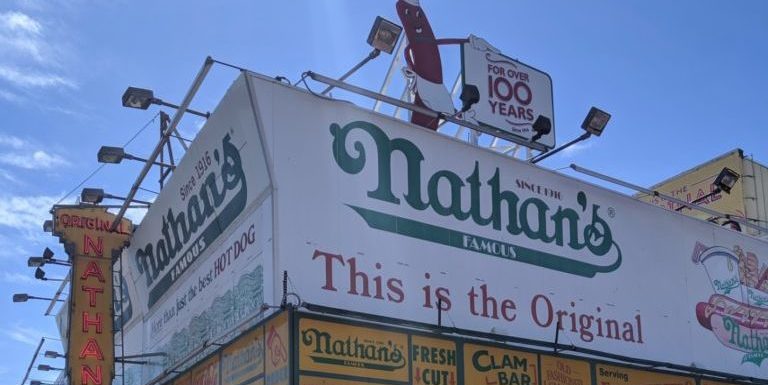 Rene Rovtar may not match many people’s idea of a competitive eater. Who is this tiny woman trying to eat massive quantities of food? At 60 years old and 102 pounds, the Superintendent of Schools in Montville, NJ, is challenging the idea of what’s possible for herself and the students she serves.

The World of Competitive Eating

Rovtar noticed, though, that a woman competing on stage finished just four hot dogs and buns in 10 minutes. Nowhere close to the winner, of course, but she thought to herself, “I could do four.”

She looked into the rules and figured she might be able to qualify. She was right.

Within a year, Rovtar was part of a world that was completely new to her. She filled her spare time with as many donuts, pizzas, and slices of pork roll as she could stomach to earn her place at the hot dog stand.

Rovtar competed at the Nathan’s annual event first in 2017 and then again in 2018. Now she will take the stage once more at this year’s Coney Island event. She secured her spot at the Des Moines, IA, qualifier by eating seven Nathan’s hot dogs and buns.

Rovtar knows she’ll never compete at the level it takes to earn first prize in an eating contest. For this lifelong Jersey girl, it’s not about winning. It’s about trying.

As the Superintendent of Montville Township Public Schools, Rovtar works to highlight social emotional learning in the curriculum. “I noticed that, too often, students from high school all the way down to Kindergarten exhibit anxiety and stress,” she said. Rovtar  believes the mentality rooted in students’ efforts to outperform other children was unhealthy. It was counter to her goals for the district.

Her attempts to tackle the problem may be unique, but she makes her point.

Through competitive eating, she models for students how to step out of their comfort zones. She tries to show that sometimes it’s okay to not be the best, or even to not succeed. The fun for her is in participating in the excitement and entertainment of the competition. She works hard to beat her personal best, and that’s the most she hopes for.

Rovtar acknowledges that the heat of the event can affect her performance. However, her goal is to hit 10 hot dogs in competition this year.

As for her future in the world of competitive eating? She’s enjoying her passion for the time being. According to Rovtar, the people who participate alongside her are genuinely friendly. When they see each other at competitions around the country there’s a great camaraderie. She would like to continue for the foreseeable future. “I’m not ready to retire,” she said.

Organizers of the Nathan’s Famous hot dog eating competition expect 35,000 people to attend the event, and Rovtar’s fans can root for her from the comfort of their couches. The women’s competition coverage will begin at 10:50 a.m. ET on July 4, 2019. ESPN3 and the ESPN App will telecast the event live.