I grew up in Monmouth County and have been around long enough to remember the old haunts of the Long Branch boardwalk and pier. There was Pistol Pete’s, the Pier Pub, a short lived water park and, of course, the notorious Haunted Mansion. There was a grit and authenticity then. No vestige of that time remains amid the swanky restaurants and shiny soaring condos that dominate the waterfront now. As beautiful as it all is, there’s something to be said for maintaining the integrity of a place. It might be easier to wipe the slate clean and start anew, but reimagining and repurposing a place takes real creativity.

The Whitechapel Projects understands that. 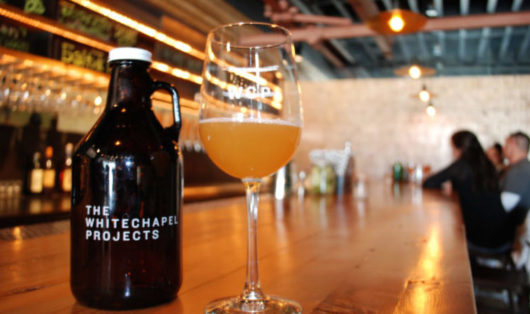 In an old warehouse on 2nd Avenue, just west of Ocean Avenue, a little oasis of old Long Branch sits in the very shadow of all that is new. Owner Preston Casertano created a mini artisan community from a nondescript industrial building that otherwise probably would have been another victim of the wrecking ball. It’s part art gallery and part brew pub. His inspiration came from a most unlikely source.

Casertano’s work in the technology field brought him to London, where he spent a lot of time meandering through the Whitechapel district. Yes, that Whitechapel. The place where gin-soaked Victorian prostitutes once feared Jack the Ripper around every corner is now a thriving arts community. He sought to replicate that vibe right here on the Jersey Shore.

The entrance brings you through a rustic courtyard where repurposed wooden bar tops promise a summer of outdoor fun and music, not to mention some fantastic local beer. Their on-premises, four-barrel brewery offers everything from a white-wine-like French Saison to an IPA hopped with hard-to-find African hops, which evoke notes of honeydew, and everything in between. “We’re not an IPA factory,” says head brewer Mike Dolan. “We brew beers that beer lovers like to drink.”

In order to keep up with demand, Whitechapel also has a selection of guest taps rigged out with New Jersey brewed beers. On my visit, it was Backward Flag brewing (Forked River) and Brotherton Brewing Company (Shamong). Look for other local New Jersey breweries to be hosted on their taps in the coming months.

While they opened in December 2018, the Whitechapel Projects is far from complete. There is an enormous pizza oven and an outside bar, developed from a shipping container, being readied for the summer. The decor has a homemade feel that reflects a menu where just about everything is made in house. How does Brunch Poutine sound? Home fries, bacon, eggs, with gravy and cheese curds puts an exclamation mark on comfort food and is probably worth the hangover it will cure. Pair that with their Irish coffee stout and you can rise from the dead just like this old warehouse has.

The Service and More

Perhaps my favorite feature of the Whitechapel Projects is their beer service. Everything is poured in an a large stemmed wine glass which is marked out for 4-, 10-, and 14-ounce pours. That means you can sample a wide variety of the dozen or so beers on their tap list without getting yourself into too much trouble. You also don’t have to fumble with those tiny flight glasses. They have a canned wine list (yup, that’s a thing) and a cocktail menu, too.

Boasting plenty of outdoor space, the Whitechapel Projects promises to hit its stride this summer. While churning out beers that run the gamut from a bright and light 3.9% ABV Belgian table beer to a big and bold 8.4% ABV Baltic Porter, brewers Mike Dolan and Richard Pirnat are reason enough to stop in. The Whitechapel Projects is much more than just beer though. It’s a cultural experience.