New Year’s Day 2019 somehow turned out to be a diner extravaganza: breakfast at the Malibu Diner in Hoboken and lunch at Tops Diner in East Newark. It became an overindulgent exercise under the pretext of celebrating the arrival of the New Year. It just happened. The day took on a life of its own. 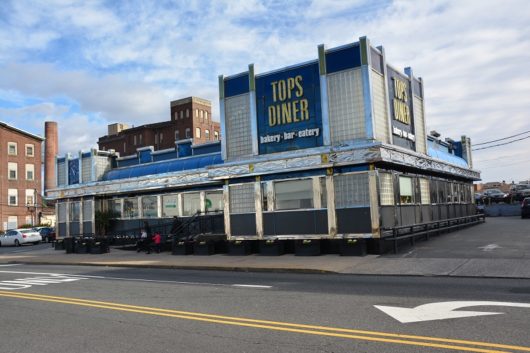 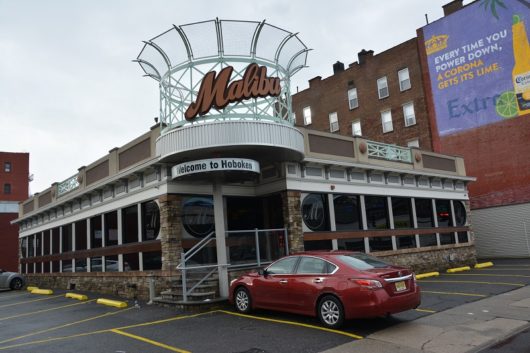 The roads throughout northern New Jersey were clear that morning (all the New Year’s Eve revelers no doubt were sleeping in after a late night of merriment), and the weather was mild, so I woke up early, walked the doggie, and then traveled east to Hoboken, the Hudson County town on the “Gold Coast” where Francis Albert Sinatra was born December 12, 1915.

I pulled into the Malibu Diner around 9 a.m., where locals were enjoying a morning meal. The atmosphere was pleasantly subdued on this “morning after.” The Malibu is a neighborhood diner. There were young couples with their little kiddies sitting in booths. French toast topped with fresh fruit was a good choice to kick off 2019. It was a delicious platter: strawberries, bananas and blueberries—red, white and blue. Happy New Year!

The Malibu is a relatively young diner, having opened in the early 1980s. Prior to that, this spot at the corner of 14th Street and Park Avenue was occupied by the old 14th Street Diner, a stainless steel eatery built by the Paramount Dining Car Company of Haledon, which opened its doors in the mid-1940s.

After returning home, I received an unexpected request to have lunch at the famous Tops Diner, located in East Newark, adjacent to the Clay Street Bridge. OK, let’s go! Over the years Tops has garnered well-deserved acclaim from the local press as well as national media outlets such as Thrillist and Time Out magazine. In 2017, Time Outrated Tops as the Number 1 diner in America. And Thrillist ranked Tops as the most “iconic” restaurant in New Jersey and put the eatery on its 2018 list of the 21 Best Diners in America. 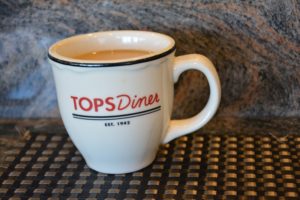 The décor is lush and exquisite, the food is sensational, and the prices are quite reasonable. The diner’s bakery turns out decadent desserts and there’s a full bar and yes, a traditional diner counter. The coffee? Excellent, of course. There are two glistening, stainless steel espresso stations behind the counter, for those who might crave a high-octane cappuccino or doppio.

But what’s most impressive about Tops is the service. There’s a multitude of highly synchronized, good-natured women and men, dressed in the black Tops uniform shirt, moving at high speeds throughout the diner to deliver orders and respond to special requests from customers. The wait staff continuously flew through the kitchen doors, which provided brief glimpses of the highly animated, hard-working line cooks and food prep; a most impressive sight. 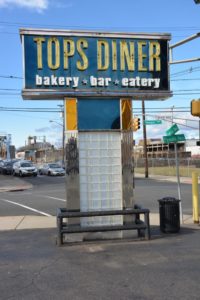 The place is a landmark and the diner’s glass-brick tower gives Tops its majestic look at street level. There was a line out the door on this first day of the year, but there are always lines out the door at Tops. Do a quick scan of the parking lot, and you’ll see license plates from throughout the country. Tops is admired by enthusiastic foodies and diner fans all across America; a “go-to” for anyone passing through the Garden State. Welcome to New Jersey.

Fans on social media rave about the seafood and meatloaf at Tops, but on this day we tried to keep lunch short and sweet. We sat at the counter—the best place to sit in any diner. My wife ordered and egg and cheese sandwich. The highlight of the dish, she said, was the tasty, tender brioche bun. My selection was eggs Benedict, a royal treat, with well-done, grated home fries.

All things considered, we decided to get dessert to go. The ride home became intermezzo. We laid out our goodies on the kitchen table: strawberry cheesecake and coconut pecan cookies. A slice of the cheesecake is one of the most heavenly things you can eat anywhere in New Jersey, day or night, anytime of the year.

I enjoyed two diner meals—breakfast and lunch—on New Year’s Day; a good way to kick off 2019. Bravo to the diner people who had the dedication and fortitude to hit the ground running and serve their customers on January 1. We count our blessings and look forward to the next year of diner adventures throughout the state.