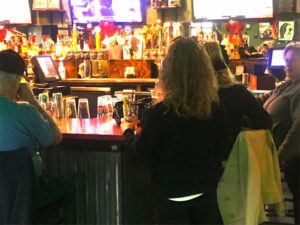 The bar was packed on this New Year’s Eve day—with the regulars who knew the bartender by name (Erin) and had clearly been settled in for a while. I walked in and headed straight to the end, near the convenient ATM. (When I arrived, there was only one place to sit!) The biggest complaint was how the chairs screeched across the floor with the slightest adjustment. My partner in crime (my of-legal-drinking-age godchild, Justin) and I stood out like sore thumbs as it was—clearly not regulars, clearly not from “these parts,” but we were made to feel welcome nonetheless.

Erin, who came from somewhere other than behind the bar, which was vacant when we settled in. At first, I helped myself to the Tailgate* and regular menus. Then Erin came flying over with a beaming smile and a “Hey guys, how are ya?” Loved her energy!

As we ordered the wings and fried green tomatoes I asked Erin to select a third item—whatever was her favorite. “Oh I’d go with the pretzel bites because the sauce is so, so, so good,” she said. “The way the pretzels have the coarse salt, too, and then dipping them in the sauce…it’s really, really good.” As she describes the dish, her hands gesticulate between the size of the pretzel bites, about two inches wide, to a full thumbs-up by the time she finishes saying the word goooood.

The Vibe and My Vantage Point

The vibe is quintessential neighborhood bar. A small stage is set back toward the kitchen, for the weekly live music.

TCP, which I now call it (and to which the regulars would surely object), is the kind of place where you either belong or you sort of don’t. We definitely did not, but the entire crowd was super chill, super friendly, and welcoming. But you know what I mean, right?

Spicy goodness and perfect to cure the little bit of a headache left from the previous night’s beer consumption. Nothing spectacular—just a solid, strong, kicking Bloody Mary to cure what ails you.

Despite the fact that TCP presents as a full-on neighborhood sports bar, the menu is robust. Even the website boasts, “Come for the beer, stay for the food.” I decided if they were bothering to put these gorgeous babies on the menu, they had to be good. YES, SIR! I was indeed correct. Rolled in a homemade crusty goodness of plain breadcrumbs and cornmeal (to my best guess), the tomatoes were tasty and juicy. They were not at all overfried and the horseradish sauce—definitely from scratch—added a lovely element to the delicious crispness of the crust and faintly sweet flavor of the tomatoes.
Jumbo house made BBQ Jumbo Wings, Boneless $11 ($8 on Tailgate menu)
Served with blue cheese

Holy yum, Batman! These glorified, homemade chicken nuggets of goodness had just the right level of crisp-to-chicken ratio. The crisp was flavorful even beneath the spicy, sweet, peppery bbq sauce that was generously tossed on. Once the bites are dredged thoroughly through the chunky blue cheese and that first bite goes into your mouth? Genius!

If Erin hadn’t made the recommendation there’s NO WAY I would have ordered this. I had just been at the Asbury Festhalle and Biergarten the night prior and ate my fair share of ahhhhmazing hot, fresh pretzels. But let me tell you something about the beer cheese sauce—it’s so gosh darn magical that I’m fairly certain it was made by unicorns on Planet Cheese Beer! It was creamy and tasty and gooey and so clearly a departure from the Velveeta nonsense I expected that I was just about giddy. So much so, in fact, that I was willing to overlook one small detail: that I think whomever made the “bites” over-nuked them, making the last several on the plate more like small rocks. It mattered not; I would order them again just to eat the cheese sauce! 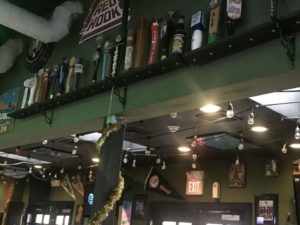 As I celebrate the one-year anniversary of my column, I introduce to you this section as well as What’s Uncorked (below), which will cover wines offered at each of my stops.

Not that it’s a surprise to any of you, but TCP does not have a wine list. White and red are available at the bar, but ask upon arrival as brands change often.

What Else to Know

Just down from Bahr’s Landing, the Chubby Pickle cannot be missed with its striking green exterior and crooked lamppost in front. Guests may park on the street as there is currently no parking lot. ATM on premises. 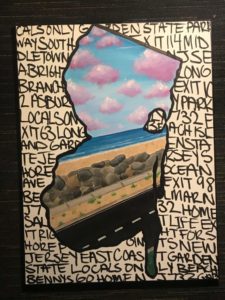 Know Before You Go!

Hours, prices, and menus are subject to change.

Adam Horvath - September 27, 2021
Set the way-back machine to late 2015, when the once-great grocery retailer that served Fanwood filed for bankruptcy and shuttered all of its stores...