Save the Date! Sunday, August 5, 2018, is National Oyster Day. Restaurants across the Garden State will be celebrating with bivalves from the local waters and from around the world. 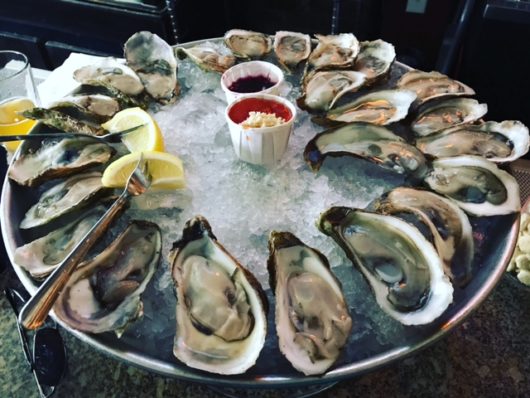 Here are 10 of our favorite spots to visit for the freshest oysters around.

100 Steps serves up to a dozen varieties of fresh oysters, several from New Jersey, by the unit, the half dozen, and the dozen. The Cranford restaurant also serves small and large seafood platters featuring oysters as the stars.

Oysters are of course a focal point of the menu at Dock’s and the star of the raw bar with 8 to 12 varieties available nightly. Seafood samplers for two or four guests are worth trying, and the broiled oysters (choice of Rockefeller or champagne leek) we as well as fried oysters (plain, marinara, buffalo, or wasabi crusted), are not to be missed.

Fin Raw Bar, as the name suggests, has an extensive raw bar with a rotating selection of up a dozen oysters from East and West Coast USA and Canada. On occasion, Fin also offers crispy oysters which are tempura battered, fried to perfection and served with a lemon-garlic aioli.

Halcyon serves up both East and West Coast oysters on its raw bar and diners can also pair a selection of seafood and oysters with its three enticing seafood platters.

Slurping oysters, gazing at the stellar Manhattan views—that’s just one of the enticing experiences at Halifax. This riverfront restaurant offers a fresh selection of East and West Coast oysters.

Jockey Hollow has four separate dining areas including one called…wait for it…The Oyster Bar. Bivalves are displayed on ice in a case for patrons to admire. There are several varieties of oysters available including Jersey’s own Forty North oysters. There’s even a plump fried oyster gilding on the eggs benedict at brunch.

Maritime Parc boasts panoramic views of the Hudson River, the Statue of Liberty, Ellis Island, and the Manhattan skyline. The popular waterfront restaurant offers an impressive raw bar and East Coast oysters are served by the unit and featured on a petit or grand platter.

The popular and historic down-home seafood restaurant offers Delaware Bay oysters by the half dozen and the renowned fried East Coast oysters served as a dinner entrée.

Nestled near the docks on the Manasquan River, in Brielle, the casual-yet-elegant Shipwreck Grill serves up several USA and Canada oysters and titanic- and colossal-sized seafood platters.