Judging seems to get harder every year. The number of breweries in New Jersey has breached the 100 mark, so I guess that makes sense. Nearly one third of those breweries showed up in Morristown for the all-New Jersey Beer Bacon BBQ Showdown this year, making it tough for the judges to pick just two winners in the beer category.

Coffee stouts, perhaps appropriate for the rough weather, seemed to be popular among the entrants, and one did ultimately stand out. Icarus Brewing (Lakewood) took the title of Best Brew with its velvety smooth “Kalashnikovcoffee” Imperial Russian Stout. There were a number of beers in the running for the favorite, so well done, Icarus! 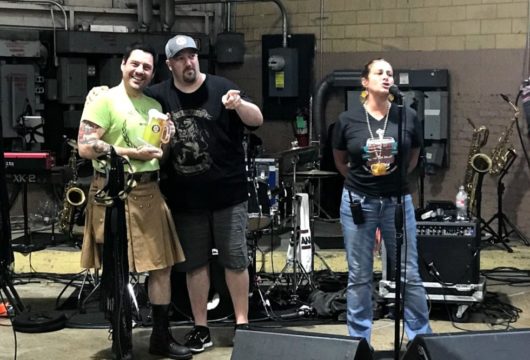 The next task was to pick the Most Unusual Brew. There were some pretty wacky beers (more on that later) but we settled, somewhat ironically, on a lager. May’s Maize, from Man Skirt Brewing (Hackettstown), is a Vienna lager brewed with maize to impart that South-of-the-Border flavor. It was almost like a corn chip in a glass. Looks like you don’t need to wear pants to make a great beer. 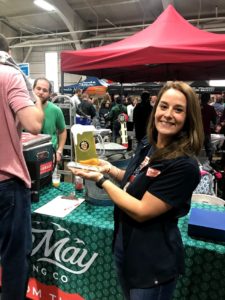 The People Have Spoken

The final beer award was the People’s Choice for Best Brew. I was pleasantly surprised to see Cape May Brewery’s (Rio Grande) The Bog nab that honor. It’s a cranberry wheat beer lemonade shandy. Tart and refreshing, it came close to winning Judges’ Favorite last year and Most Unusual beer this year. It’s a perfect beach libation and certainly worthy of the award.

Brotherton Brewing (Shamong) has quite a reputation for hoppy beers. Green Earth American Pale Ale has a rich malt base of rye and oats and lots aroma hops. A little fruity, a little dank, and a lot of fun.

Lone Eagle Brewing (Flemington) got a little funky with a dry hopped smoked saison. Applewood smoked malt from New Jersey’s Rabbit Hill Farms gives this beer a little delicate smoke. Perhaps not everyone’s cup of tea but I enjoyed it.

Czig Meister Brewing Company (Hackettstown) vied for the most unusual beer with their “The Gunsmith”.  A maple, caramel, bacon, smoked lager might sound gimmicky and it is. Who cares? It fit the theme of the event and was a hoot to drink!

Three 3’s Brewing (Hammonton) conjured up an orange creamsicle by introducing soursop, lactose and vanilla beans to a Citra and Denali hopped IPA. Evolution Six is kind of the adult version of chasing down the ice cream truck.

Ramstein Brewery (Butler) did not disappoint with their world class Maibock. They didn’t enter it in the contest but were pouring it at their booth. I never miss a chance to sample this rich, malty beer with that signature noble hop bite.

On to the Food

When it came to the food side of the competition, it was time to loosen our belts, take a deep breath—after sampling 48 beers—and dive in. 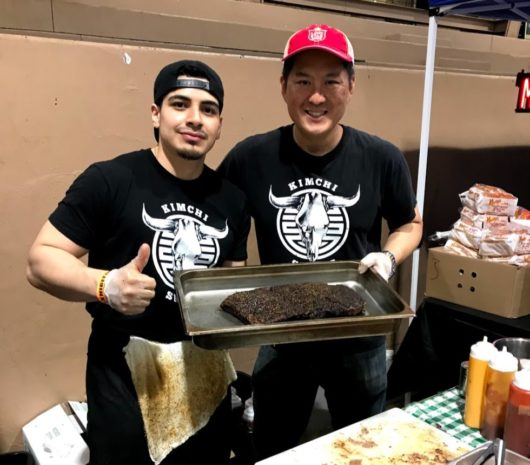 The coveted BBQ title from the judges went to Kimchi Smoke for its perfectly smoked, melt-in-your-mouth brisket. Owner Rob Cho is no stranger to the winner’s circle for his Chonut (an outrageously delicious donut-for-a-bun barbecue concoction) but we were pleasantly surprised to see that this year, he just brought the Q. Straight up, excellently executed barbecue.

Best Use of Bacon

Now, hear me out. It sounds like a disaster waiting to happen, but Culinary Renegade Wandering Kitchen’s  Crunchy Reese’s Peanut Butter Cup bacon got a unanimous “Hell Yeah” from the judges. One bite and we were sold.

This honorable title went to Bearded One BBQ for its Brisket Grilled Cheese! A judges’ favorite as well. (To learn more about Bearded One BBQ, click here check out the Jersey Bites spotlight.)