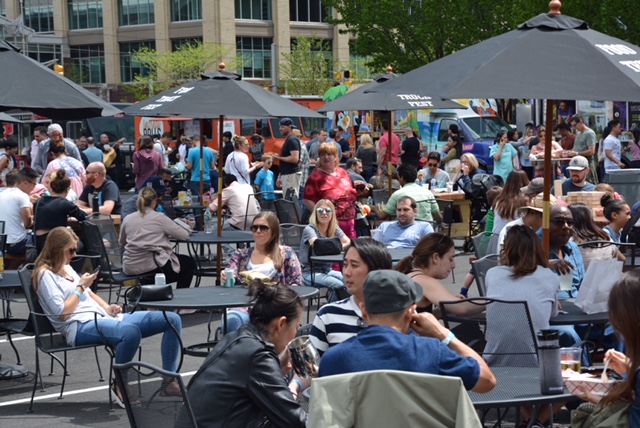 Good-natured, hungry foodies arrived en masse in Jersey City on Saturday, May 5, for the Jersey City Food Truck Fest. The event, produced by Evan Berman Productions took place just a short hop from the Harborside Light Rail Station. It was a captivating, creative confluence of colorful cuisine deep in the heart of the Garden State’s second-largest city.

The Makings of a Great Fest

Let’s review a checklist of key elements that made this gathering a success on a glorious spring day. Food trucks? Yes, there were over 20 of them. Delicious, fresh food with a down-home kick? Absolutely, along with a symphony of mouth-watering aromas that filled the air. A beer garden? Yup. Bouncing amusements for the kiddies? Kids were indeed laughing and bouncing in a contained, inflatable environment. A spirited Mariachi band? Of course! Cute babies in strollers? A slew of them. Doggies? There were lots and lots of well-behaved, friendly doggies having a grand time. Live music? Without a doubt. Bean bag toss games? Oh yeah, quite a few of them. Surprise celebrity guest appearances by Taylor Swift, Queen Elizabeth, Meryl Streep, Bruce Springsteen, Paul McCartney, and Ringo Starr? Well, they would make a gathering a success, but no, they weren’t there.

Twenty-first-century food trucks and diners share a common Jersey ancestry: both are descendants of lunch wagons. Horse-drawn lunch wagons were a common sight on the streets of Hudson County and throughout New Jersey 120 years ago. Lunch wagons were strikingly similar to today’s food trucks in terms of their community spirit and business mission to provide quick, tasty meals to passersby on town and city streets. The wagons were mobile, giving them the flexibility to change locations as needed to better capture business at factories, downtown shopping centers, trolley stops, and train stations.

Built mainly of wood and mounted on a steel chassis with wheels, lunch wagon exteriors were decorated with an assortment of stylized graphics and bold, artistic lettering. On the inside, lunch wagons were lavishly furnished with floors and walls covered in intricate tile patterns, long marble counters, round, swivel stools, grills and steam tables, stainless steel coffee urns, pie racks, and integrated utility hookups for water, electricity, and gas. Lunch wagons had large windows to accommodate take-out orders for pedestrians, much like food trucks, however, lunch wagons were designed with a doorway so that up to 15 customers could sit and eat inside the lunch wagon.

Lunch wagons were born in Providence, Rhode Island, in 1872. The business was a novelty and quickly caught on, with the concept spreading throughout New England, New York, and New Jersey. One of the pioneers of New Jersey’s lunch wagon business was Jerry O’Mahony, who lived at 7 East Sixteenth Street in Bayonne. Jerry and his younger brother Daniel operated several lunch wagons in the early 1900s, but soon they decided the “real” money in the business was in building lunch wagons.

Jerry and Daniel, along with family friend and master carpenter John Hanf, built a lunch wagon in the backyard of 7 East 16th Street and, in a contract dated July 3, 1912, sold it to a Jersey City entrepreneur named Michael Griffin for $800. Jerry O’Mahony went on to become a legend in the New Jersey diner business, opening a factory in Elizabeth in 1925 and producing an estimated 2,000 stainless steel eateries, which are renowned throughout the world as classic examples of American “machine age” industrial design. 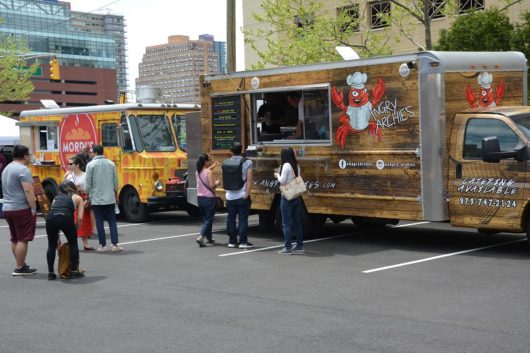 Today’s food trucks embody New Jersey’s grand heritage of mobile meals started by lunch wagons. It’s a true moment of history and the Jersey City food truck festival was an honorable example of this tradition. Jerry O’Mahony, who died in 1969, would have been proud.

All the food trucks did great business at the festival. The event, in essence, turned into a lively block party and an outdoor food-lovers’ buffet. Kimchi Grill appeared to have the biggest following, at least during the early afternoon hours. (Kimchi is a familiar side dish in Korean culture, a mix of fermented cabbage and other veggies like carrots, radishes and scallions with exotic mixtures of spicy and sweet seasonings.) For the tacos, colorful kimchi topped fried falafel nuggets.

“That’s a nice looking kimchi taco you’ve got there,” I said to one patron who stopped and allowed me to take a picture of the hand-held meal. “Actually, this is a vegan kimchi falafel taco,” he pointed out, putting emphasis on vegan.

This reporter began the day with a respectable Philly cheesesteak and fresh-cut fries from The Tasty Trolley. For dessert, I got a yummy organic chocolate ice cream cone (and a sparkling smile) from the operator of the Milk Sugar Love truck.

A gathering of friendly strangers at the patio table where we sat provided informed observations on my cheesesteak. Initially, there was a mild debate about the nature of the cheese. Was it yellow American cheese? Sliced cheddar cheese? Velveeta? “Cheez Whiz,” declared a woman at the table, setting the record straight while informing us she had grown up in Philadelphia.

“To be a real Philly cheesesteak, you gotta have the Whiz,” she said with absolute certainty. I’m a Jersey guy, with a limited knowledge of the City of Brotherly Love, so I’ll take her word on it.

The sandwich was delicious on a great day in Jersey City—a convivial gathering in a parking lot surrounded by food trucks, with the New York City skyline in the background. Life is good in the Garden State.