Keyport, New Jersey, native Chef Andrew Araneo has brought a taste of the bayou to the beach. Since childhood, Chef Drew has been cooking. His dream, like most chefs, was to open his own restaurant. He started out honing his skills at several prominent restaurants in New Jersey, including Joe and Maggie’s in Long Branch and Whispers in Spring Lake. Finally in 2005, Drew turned his dream into a reality and opened Drew’s Bayshore Bistro just blocks from where he grew up. Since opening, the eatery has become a food fixture in Keyport featuring southern-inspired food and welcoming atmosphere.

When I dined at Drew’s, I was vying for the Voodoo shrimp. The sauce starts with dark beer and takes at least a couple of hours to make. This dish definitely did not disappoint! The shrimp were tender and the sauce creamy and decadent. Upon looking at this dish, you’d think that you were only being served the shrimp. Once you dig in, you are pleasantly surprised that underneath the shrimp is jalapeño cornbread, a great textural element.

Everyone is smiling at Drew’s. From the servers to the diners, everyone is happy to be at this local bistro. The decor is simple and welcoming. You immediately feel at home when you walk through the restaurant doors. It’s the kind of place where you come in with your bottle of wine and you’re treated like family. The ambiance is casual and homey. There is also not an empty seat in the house! While I dined there, the dining room was at capacity. I definitely recommend making a reservation, as Drew’s has become quite the popular place in the area. 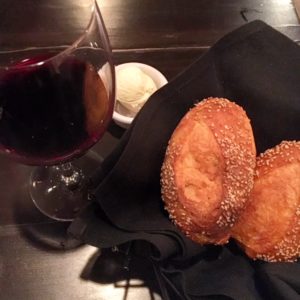 Although cooking was always Drew’s passion, he was on the late side in deciding he wanted to be a chef. One day an instructor at culinary school pulled him aside with a job prospect and said, “Cut your hair, put on a shirt and tie, and go see Joe.” And that was that! Chef Drew spent time in Joe’s kitchen at Joe and Maggie’s in Long Branch and then Whispers in Spring Lake before starting out on his own. Chef and owner Andrew Araneo still attributes his early skills as a chef to Joe Romanowski. “He taught me how to break down a duck, marinate the breasts, make duck confit, roast the bones,” says Drew. “His soups were packed with flavor. A lot of important people working in the industry went through his kitchen.”