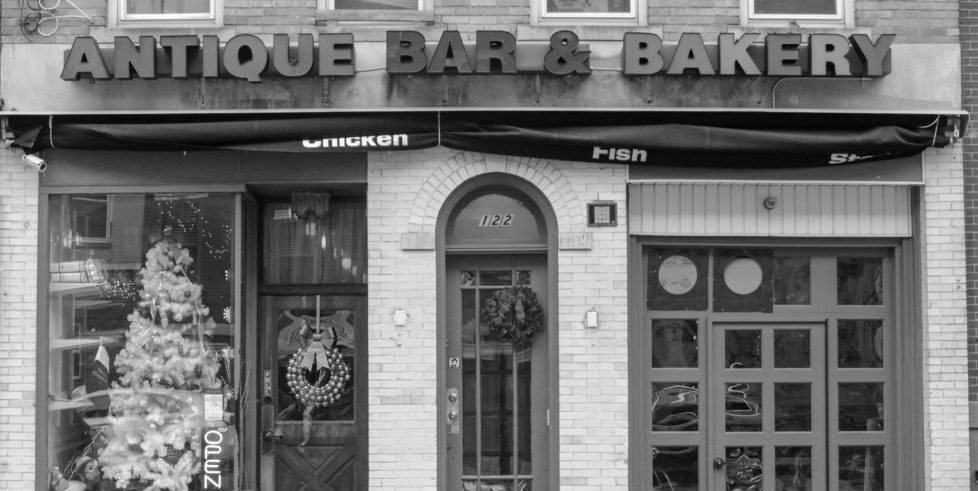 When the news came out that one of Hoboken’s most beloved, century-old Italian bread bakeries was being turned into a restaurant that was not only keeping its coal-fired oven but using it to do most of the cooking, this local engineer-turned-chef had to see for herself.

Antique Bar & Bakery opened February in Hoboken by Chef Paul Gerard, filmmaker Joseph Castelo, and restaurateur Rocco Ancarola. It somehow manages to not just honor the traditions of the original space but also beautifully carries forward the owners shared memories of Brooklyn, and ’70s art, film, and music. As they put it, they want to “keep the fire burning” and have décor that reminded them of the “super seventies.” They’ve even infused their sensibility in the seasonal menu that’s cleverly written as a script, with notes: 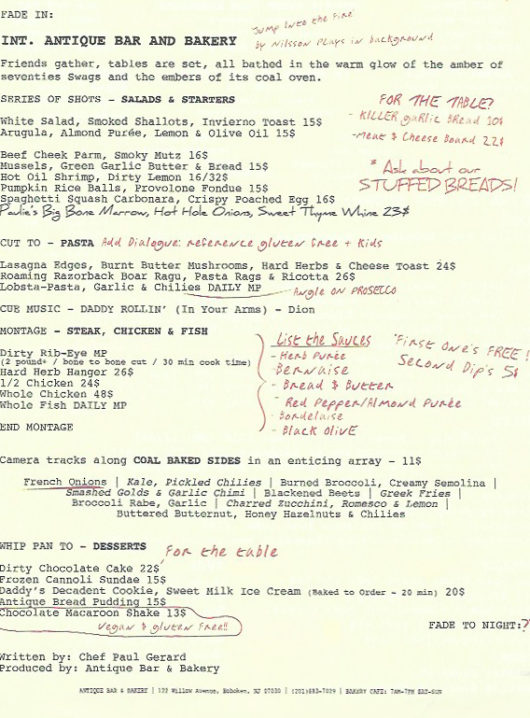 Speaking of the menu, have I raved about the food and cocktails yet? Chef Paul Gerard and his team are doing some seriously impressive—and seriously delicious—cooking and cocktail mixing here, too, after a recent stint at the James Beard House.

Antique Bakery was built in the early 1900s and has served as both a traditional bakery and a helping-hands food service for local churches. The original tile work in the entrance has been longingly restored and the overall turn-of-the-century look of the space remains. Filled with personal artwork and décor, the space has the rock-and-roll vibe of your cool uncle’s bar from the ’70s with vintage furniture, swag lights, and gorgeous pieces on the walls throughout the space. Joe brought his Bay Ridge grandma’s oh-so-Italian mirror, depicting the story of Adam and Eve, to a place of honor, above the bar. It’s all based on memories—of their childhoods and the food from that time.

The oven itself occupies the back room/open kitchen as its own work of art. They chose not to place any other art in the room—the only exception being the iconic Farrah Fawcett photo of days gone by. Chef Paul spent so much time cooking in basements that he wanted to keep an open kitchen and make his team part of the party. (Doesn’t everyone hang out in the kitchen at the best parties anyway?)

It was the oven that lured the talented and all-around good guy Chef Paul Gerard to Hoboken. Working in restaurants since the ’80s in NYC and New Orleans, Gerard developed a unique approach to cooking. He had been searching for exactly this sort of environment to showcase his own style of cooking and hospitality. When they told him he couldn’t possibly cook with that oven, it was just the challenge he needed. We spoke for quite some time, chef to chef, about how he harnessed that heat as well as his cooking style. We both appreciate that the current trend in cooking has been to drop the trends and just focus on quality ingredients and real, delicious food. He says one of the best compliments he’s ever received is that his food is the best Sicilian or best New Orleans cuisine a person has had.

Gerard’s approach is simple, but difficult to replicate. He uses the freshest ingredients he can find, keeps the dishes to basic components, and prepares them to perfection. His core style is to use plenty of salt—a requirement in almost all dishes—lemon, for acidity and brightness, and high heat in order to get just the right kind of char on the dish. (This is a practice I follow in my own recipes and teach to home cooks.) Then he chooses fresh herbs that best make sense for a particular dish, torn fresh oregano for his ragu for instance. Chef Paul brings out the best possible flavors in the dishes he prepares.

Chef Paul wanted to create his entire menu centered on the capabilities of the oven and his belief in the freshest ingredients, seasoned the way food should be. He starts the oven at 800 degrees to char veggies, 500 degrees for things that need more time like butternut squash, then 375 for the chicken. He likened it to stir fries and how you need to cut things to the right size to cook with the right timing, except in reverse. Everything gets cooked in the vast 400-square-foot oven. 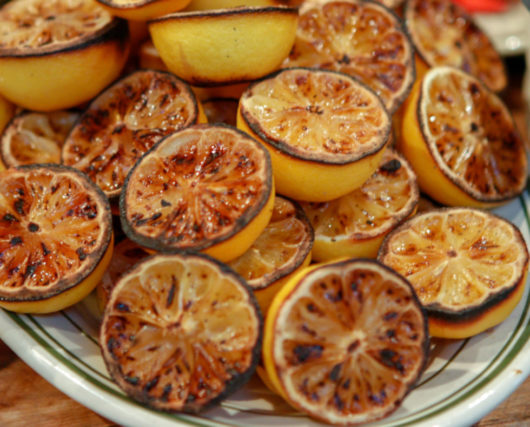 Except for the steaks. They needed to be treated a little differently.

The oven is fed fuel in an area called the hot hole, which is where the actual fire burns. It is in the hot hole that temps can exceed 1000 degrees. And it is in this space that the steaks are placed. Chef Paul’s steaks are magnificent: three-pound, aged beasts from Debragga, true caveman style cooking with fire, evoking our earliest memories of grilled steaks at the family barbeque. He starts the steaks with plenty of seasoning and then drops them into a sizzle pan in the hot hole. The high heat Chef Paul can attain in the oven is something most steakhouses cannot achieve and enables him to create the oft-sought-after black and blue steak, strongly charred outside with the inside cooked perfectly to my personal choice of medium rare approaching rare.

His plating style is rustic, spontaneous, and natural—embracing the Japanese philosophy of wabi-sabi, which strives for perfection through imperfection. However, his classical French techniques are flawless with sauces such as romesco, homemade stocks (Gerard claims his stock is better than that of the godfather of stock Jacques Pépin), and a deep Bordelaise sauce that takes seven full days to make. With the weather turning towards winter, Chef Paul has moved his menu toward slow braises and wintry vegetables with wonderful results.

And then, of course, there’s that incredible bread tucked inside each dish to soak up the sauces. Chef Paul even devised a bread-and-butter sauce based on a beloved memory of cold butter on fresh Italian bread, dunked in Sunday sauce.

Drink and Be Merry

The Antique team takes its bar program seriously. On the evening I went to interview them, they were working on a cocktail called “Stone’s Throw from Manhattan,” a cleverly named riff on a Manhattan where they imbue a smoky flavor by coal smoking their cherries. They even char the orange peel that garnishes the beverage. The list of cocktails and wines is worth a try on its own as well. 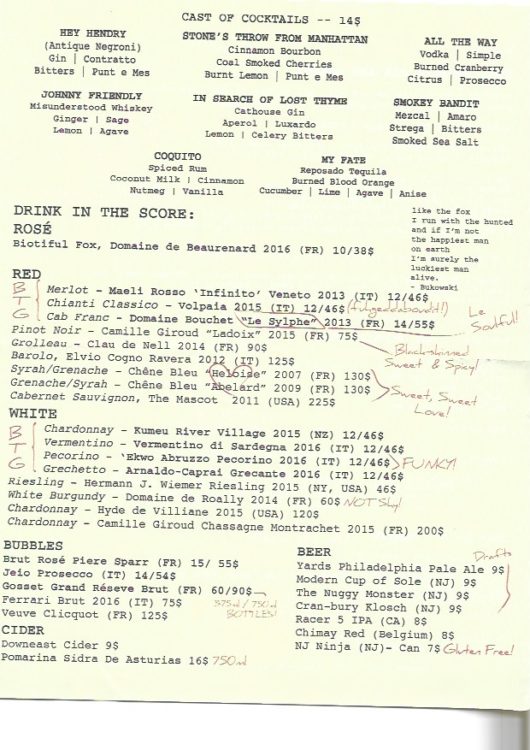 Antique wants—and deserves—to be your second home, starting with coffee and fresh baked bread or pastry in the morning, lunch on Friday, and brunch all weekend, after-work cocktails, clearly dinners, as well as creative late-night events. The eatery also recently hosted a Halloween silent disco with go-go dancers just to be a little daring. They also regularly host Movie-oke, where they play classic ’70s films that people can recite the lines to. It is that sort of creative thinking that flows through the entire establishment. (Pro tip: Get on their mailing list to be invited to the coolest after parties!)

There are certainly plenty of dining options in Hudson County, however, few that provide such a comfortable and fun atmosphere coupled with superbly prepared food and drink. If you are looking for a new place to try and you haven’t been to Antique Bakery yet, make it a priority.