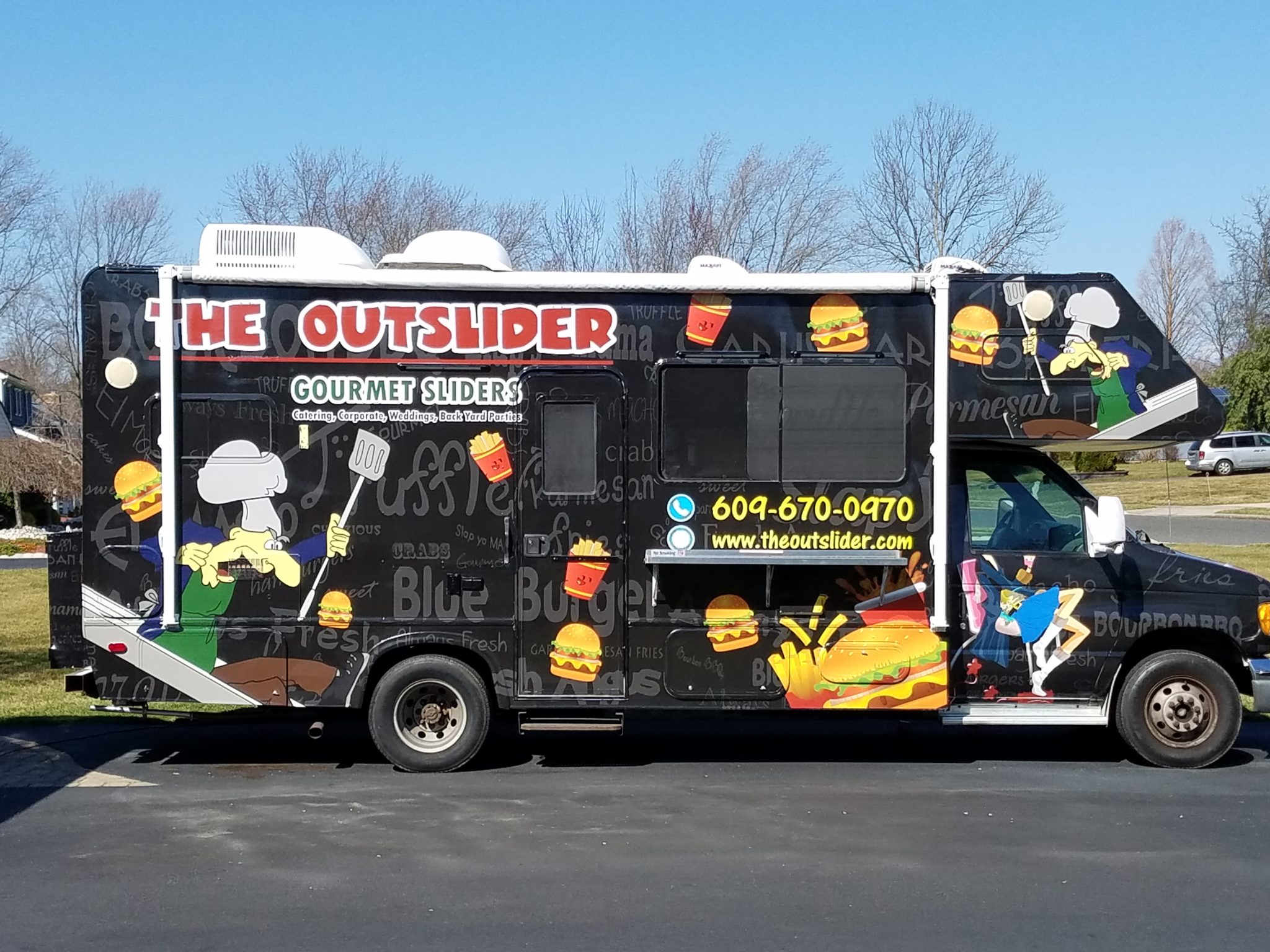 A slider is just a little burger, right? Maybe for some, but if you’re Chef Bob Leahy, owner of the Freehold, NJ food truck, The Outslider, it’s a way to bring an idea to life. He told Andrew Blustein all about it.

JERSEY BITES: What inspired you to open a food truck?
BOB LEAHY: You can only work for somebody for so long, making them money, coming up with ideas. Plus the crazy hours that you put in as a chef. I used to work at country clubs, and the hours were just tolling on the body. I then went to work for the school system to try to get better hours. I did that, but Hurricane Sandy came and the school I was working at, the cafeteria flooded, and it was shut down. A food truck was something I always wanted to do. I bought an old RV and started taking it apart—never did [that] before in my life. I learned a lot and just stripped the truck. In the meantime, before I actually put the truck back together, I built my concept. You really can’t build a truck without knowing what you’re going to do.

What was that concept?
The Outslider. I came up with a lot of other ones, but being a chef, I get bored very easily. I wanted something where I could do whatever I wanted. That’s where I came up with sliders. There were really no trucks out there that were doing burgers, maybe one at the time. I thought sliders were nice because they’re not a lot of heavy food, and I can be creative with it. I have crab cakes, ahi tuna, pulled pork, chicken and turkey burgers.

How did you come up with the name?
My wife and I went back and forth thinking of different things. I like the movie The Outsiders, and I’m like…Outslider. Outside, sliders. We kind of just stuck with that and kept beating it around for like a week or so. Then were like, “That’s it, perfect. I’m a slider truck.”

What was the beginning like?
I’m out of Freehold. That’s where I built it. Then…What do I do? How do I do it? I got a NJ Food Truck license to go to Newark. I got permitted there, and that’s where I was going every day. It was a long haul, but I just stuck it out. I had to leave early in the morning to get a [parking] spot. That’s what I did for the first four to five months. It was hard. A lot of hours and not a lot of money. And then at the end of the season I did a couple of events. I met a lot of the other trucks and talked to them. We really helped each other. We’re not competing against each other. It’s really just a great group of people.

What’s the biggest lesson you’ve learned so far?
Probably how to start it up. Learning about the laws and regulations of the state, what you need, and how to get NJ Food Truck permits. And not only the state, but each town has different laws and regulations.You can’t just show up somewhere. People see the movie Chef and think they can build a truck, by some food, park and then people are going to line up. It’s tough in New Jersey because we don’t have a city like New York and Philadelphia where there’s a lot of walking traffic. That’s why I went to Newark, but it was tough because you have to find the right walking traffic. That’s hard to find.

Where can people find your NJ food truck?
I’m all over. I try to do a lot of corporate lunches during the week. I don’t really do a lot of events anymore because promoters got a little greedy. They’re just not proven. It could look like a great event, and you show up with all this food and labor, and it turns out to be a bomb. You’re just kind of lost for the day, and that hurts the rest of the week. I like the corporate catering and private events because it’s a guarantee. I’m booked and I know what to bring in the truck. Vending is tough because it’s really weather based. It’s hard to say where I’m going to be. That’s why I have a calendar online, for people to follow.

How does social media help your business, especially Twitter?
It really is helpful. I’m just not a techy guy. People are like, “Bob, what are you trying to say?” It is a helpful tool, though.

What’s your favorite thing about owning your NJ food truck?
You’re your own boss; you pick your own hours. If my wife and I want to go on vacation, I shut the truck down. I have some fantastic employees, so I could keep it open, but that’s their time, too, so they can take a week off. It’s making what you want. You book your own hours. I shut down during the winter. I find it hard and unpredictable during that time. I can’t get the grill hot enough to cook the burger right, so my product doesn’t come out right. If that’s the case, I’m not going to vend.

What is your most popular menu item?
I would say [it’s] between the crab cake and the bourbon barbeque burger. So we do a fresh lump crab cake, barely any filler, and top it off with coleslaw and chipotle aioli. For the other one, we make a house bourbon barbeque, with a lot of bourbon in it. We top the burger with sharp cheddar, applewood smoked bacon, and then the sauce. My menu changes a lot. I’m adding new things, taking off things I’m tired of. I’m always changing it up.

What inspires your menu options?
Sometimes I’ll go out to eat, I’ll see something and think I can do that in a slider. Or sometimes I’m driving and I’ll just think of something. Being a chef for so many years, I’m still creative. Some things aren’t as good as you think [the’ll be] once you put them together, but some really take off. We did a Sonoma burger, which is very simple, with red onion and red wine reduction topped with goat cheese. It’s very simple burger, and it’s very popular.

Do you have a favorite?
I do like the crab cake. And, you know, I’m just a simple eater, so I really like the Outslider: American cheese, pickle, ketchup. The classic.

What techniques and lessons that you learned earlier in your career are useful still today?
I worked for this one company that I helped open up restaurants for, and we tried to simplify things. Like if making something was a lot of steps, we tried to simplify it without changing the quality. I think that’s what I tried to do with the truck, because you are putting out food fast but you want to put out quality. I cook to order, so you’re going to wait at least four to five minutes, but it’s going to be hot and fresh.

Are there other NJ food trucks around the state of which you’re a fan?
There really are. I’m good friends with some of them. I love their food. Oink and Moo has great barbeque. The Flying Pie Guy is new; he has a great concept. He has fantastic pies with fantastic crusts. It’s an Australian pie. My Four Sons, which is Asian food, is really good. The big thing we with me is that it’s not just good food–they do it fresh and their trucks are clean.

What kind of support have you gotten from the people around you?
My wife supported me the whole way. There were times I wasn’t making money, but she kept it positive. I’d come back with only $100, and she’d say, “You know, 100 is better than zero.” My wife stuck by me through the hard times and the good times.

Is there anything else you’d like to share?
After 30 years of being a chef, and again I’ve done everything from corporate to country clubs to openings restaurants, this is probably the most fun I’ve had. I’m out there meeting people. I was always in the back of the kitchen. I only heard complaints and compliments from the waiter. Now I hear it from the people, and it means a little more.