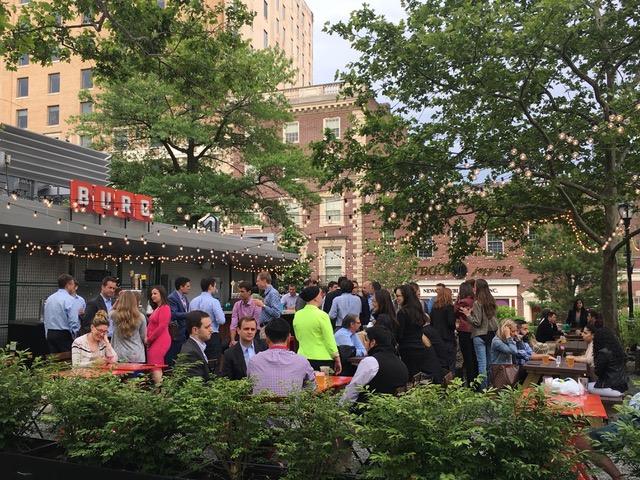 Jersey Bites received a complimentary invitation to attend this event.

Last week, I was invited to an event at Chef/ Restaurateur Chris Siversen’s BURG: Burgers & Taps, in the heart of Newark’s revitalized Military Park.

On the evening I visited, the atmosphere was picture perfect: twinkling lights, mature trees canopying above us, kids riding the nearby carousel, a lavish grassy area with lawn games, and lush flowers beds aglow with lightening bugs.

The modern BURG structure houses the kitchen and there’s an outdoor bar with stools and adjacent tables. I found a mix of hipsters, folks just out of the nearby corporate buildings, and locals looking for a casual, tasty meal. There’s even a DJ onsite on Thursdays.

BURG offers beer and wine on tap. Chef Siversen admits there simply is no space in the kitchen building for bottle storage and that was fine with me, and the dozens of guests at BURG the night I was there.

Beers are $6 and feature local brews and some fan-favorite craft beers from around the country. Note that during happy hour, beer is $4—a steal! Wines are $8, $6 during happy hour, and interesting: NY riesling, Greek Moschofilero, and more. Specialty cocktails are $9—I had The Iceberg, a frozen Manhattan adorned by three cherries. The drink was refreshing and packed a nice boozy punch.

I’d been a “beta tester” (or is that taster) for Chef Siversen’s burgers prior to BURG’s 2016 opening and was really thrilled to see—and taste—that he’s chosen to stick with the beef burger blend he’d originally created in collaboration with DeBragga: short rib, brisket, and chuck. Of all the tasty items we had an opportunity to sample, The Classic burger, simply topped with cheese, lettuce, tomato, and special dressing was my favorite. It’s juicy, beefy with the right amount of fat-to-meat ratio and a great bun. Another winner was The MP: an incredibly messy (in the best possible way) burger that works as a representation of either Military Park or Maritime Parc, Siversen’s landmark restaurant in Jersey City. This burger is topped with Califon Tomme cheese from Valley Shepherd Creamery, grilled onions, lettuce and special sauce. I’m not typically a fan of veggie burgers, but The Veggie is a solid choice with its curry mayo, apple, lettuce, tomato and crispy onions. Another item I would also typically stay away from on a burger menu is the chicken burger. BURG proves again that I should have more of an open mind as The Chicken was likely my second favorite burger of the night. It’s topped with a kale pesto, Gruyère cheese, pickled onions, and sautéed mushrooms.

The fun snacks and finger foods we tried were the Spicy Piggy “Wings,” Buffalo-style pork riblettes, and those bite-size little ribs proved to be very addicting. We also had crispy broccoli, fried pickles and disco fries. Both the fried broccoli and pickles are good with a tangy dipping sauce. The disco fries with a nice rendition of the diner classic with ultra-flavorful gravy and melty cheese.

As if all the savory foods weren’t enough, Chef Siversen had big plans for us for dessert. There were hot doughnuts served in fair-worthy paper bags, a coffee float with maple bourbon ice cream and the star dessert, in my opinion: a cup of vanilla soft-serve ice cream with birthday cake topping—yes, birthday cake! The staff makes birthday cake with tons of sprinkles, bakes it, crumbles it and places it in a low temperature oven overnight to create crunchy-yet-chewy birthday cake-flavored crumbs. Kudos on this brilliant idea that I’ll shamelessly borrow for my next party.

For a fun night out that won’t break the bank—most items are under $10—in a relaxing outdoor park with delicious casual food and drinks, head to BURG.