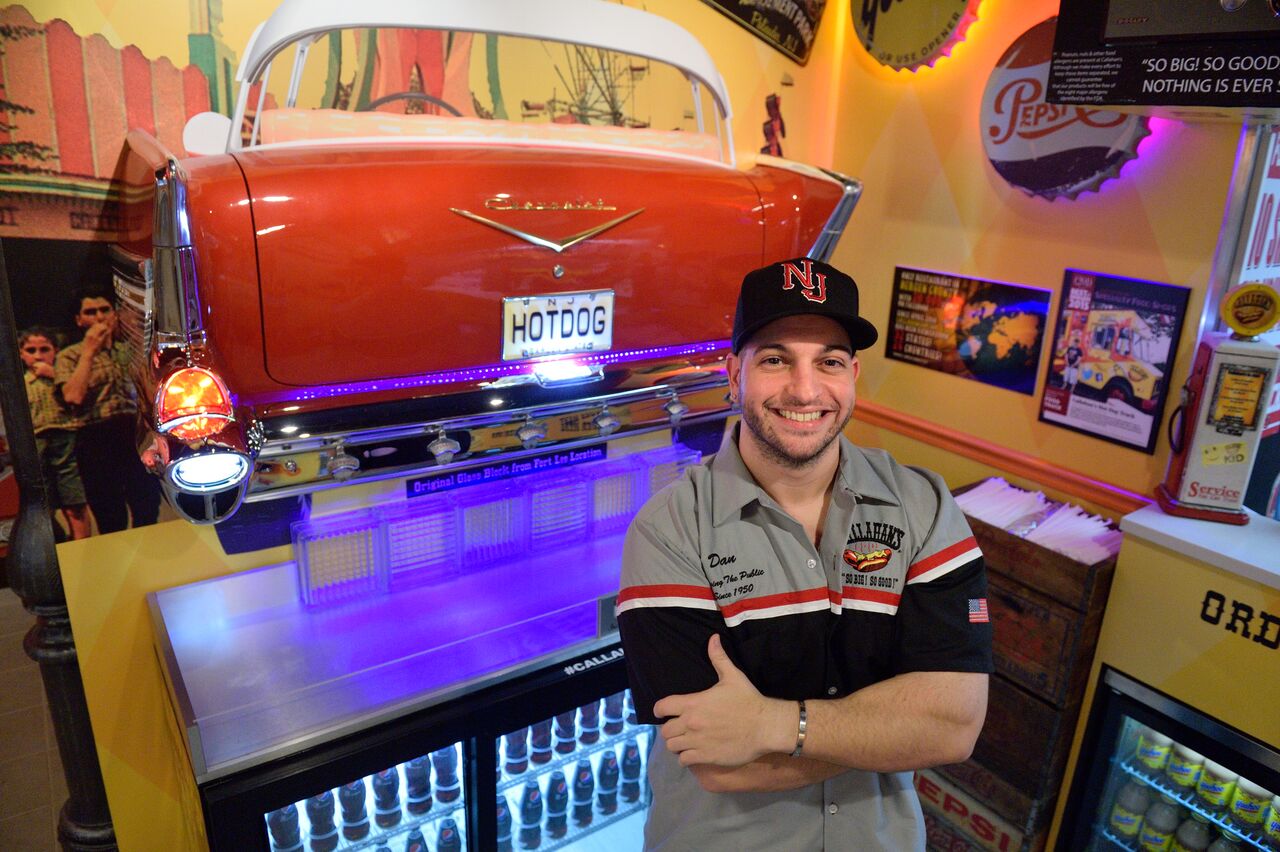 First, a bit of history: Artie Castrianni opened the original Callahan’s in 1950, when he purchased a gas station in Fort Lee that sold burgers and snacks. For 50 years he and his signature, handmade hot dogs defined the shop—and made a mark on the surrounding community. In 2000, Castrianni passed away, and in 2006 the family sold the business. For Daniel DeMiglio, Castrianni’s grandson, however, the story of this business was far from over.

“Being raised in this business since I was seven years old and seeing my family operate Callahan’s for many years, I take a lot of pride in working for my last name and not my first name,” says DeMiglio, who restarted the business with a food truck in 2014, and opened Callahan’s in Norwood in April 2015. “My grandpa was a huge mentor for me. He’s my hero and the inspiration for why I do this and why I brought the business back. Everyday I wear my grandpa’s dog tags. I haven’t taken them off since 2000. He’s been with me ever since.”

While the Norwood location drips with nostalgic design, the business has not been left behind by social media. “I have a huge wall of memes that I make for the business, and they change every month,” says DeMiglio. “Callahan’s has not only been a great product for many years, but now it is also a fantastic experience, and it’s a reminder of what being American to me is and what embracing that feeling of Americana is.”

The jam-packed menu adds a squeeze to that embrace. Head chef Danny Fabian still cooks up the same “ripper” (fried) hot dogs that the restaurant served 60 years ago. And now there’s so much more on the menu. “Grandpa was the man who steered the ship years and years ago,” says DeMiglio. “I had a dream and I brought it back, and now it’s going viral,” he says, referring to the restaurant’s strong social media presence, particularly on Facebook. “My grandpa would be laughing at that.”

DeMiglio, 34, graduated from the University of Scranton in 2006. Two months later the restaurant was gone. He found a job with the National Basketball Association, which took him across the globe, including to Beijing for the 2008 Olympics. “I took that Callahan’s shirt and wore it everywhere,” he says. “I learned a lot about the American experience and how people embrace the American brand.”

Before opening the restaurant, DeMiglio started with a food truck. His first event was April of 2014, and now that original truck can be found at Van Saun Park in Paramus, six days a week. On the weekends, the chef from the original Callahan’s, Juan Romero, is in the truck helping cook for everyone at the park. Callahan’s opened another food truck in 2016—this one travels the state to cater events.

“During that time, my father was battling prostate cancer, and that was the biggest thing for me,” says Demiglio. “I dedicated that truck to my dad. It was important for me to get that truck out there and done before his surgery. He’s cleared, he’s been great and he can’t be more ecstatic to see what I’ve done with the business.”

Family is what drives Callahan’s. DeMiglio sees his parents, Aunt Terri, Uncle Rick and Grandma Ida as “guiding lights of support.” “It’s pretty cool and surreal to see what has transpired the last four years and how much growth there has been,” says DeMiglio. The growth has included several awards, titles, and accolades, which are documented on the Callahan’s website. “That’s a testament to all the people around me. I have a great staff. I always say that it’s not ‘me’ it’s ‘we.’ The team that I have and the family that I have are the best. That’s why we’ve become so successful—because of the people.”

Images are all courtesy of Callahan’s.