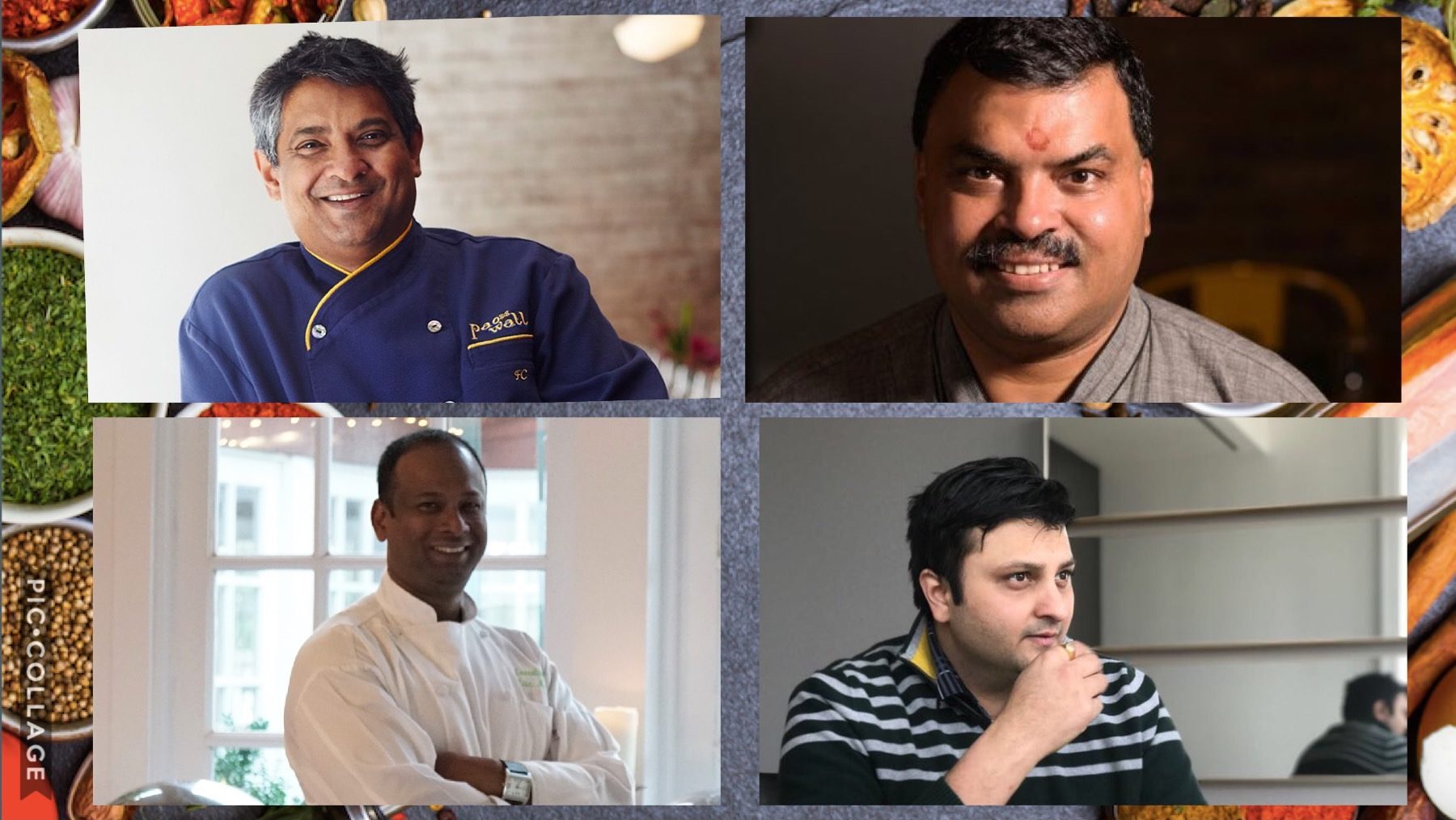 On Friday, May 19, The India Heritage Center presents its Spring Spotlight Event, an exquisite culinary evening with tastings of signature dishes prepared by celebrity chefs from top Michelin-starred Indian restaurants and special guests, music and more. The original sold-out location proved too small for ticket demand, so the event has been moved to a larger venue at the Sheraton Mahwah Hotel. 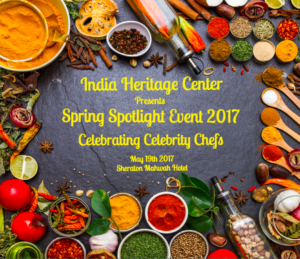 Chef Floyd Cardoz is a celebrated Indian-American chef in New York City, India, and throughout the world. Cardoz attended culinary school and began his career in his native Bombay, India. After studying in Switzerland at Les Roches, he moved to New York City to work under Chef Gray Kunz at the venerable Lespinasse. In the summer of 2016, Cardoz opened Paowalla, a casual modern Indian restaurant in Soho, NY, which celebrates his Goan-Indian Heritage and showcases his seamless integration of Indian flavors and techniques with local ingredients.

Chef Hemant Mathur is a top top Tandoor master, executive chef and Michelin-starred restaurateur. During his early years in New York, he contributed to the success of some of the city’s top Indian restaurants. In 2015, he became both the executive chef and co-owner of six Indian eateries in New York City: Chola, Kokum, Chote Nawab, Dhaba, Malai Marke and Haldi. He is now in charge of overseeing the kitchen and menus, creating signature dishes and specials inspired by each venue’s regional focus.

Chef Eric McCarthy of Tulsi, in NY, captures the dynamics of the South Asian generation of today, while preserving the traditional ethnic flavors of the past. Professional yet personalized touch and finesse can be seen from his detail to design and presentation of mouth-watering dishes. In his culinary journey, Chef Eric has won six Michelin stars. The New York Times, Time Out Magazine India in New York, India Abroad & Dinner Journal have recognized his excellent culinary skills with rave reviews. He was featured on the Tonight Show on NBC with Jay Leno for the hottest curry (called phaal). McCarthy was also featured on the Food Channel’s Chopped. He has created special menus for celebrities including Demi Moore, Mike Tyson, Russell Crowe, Leonardo DiCaprio, and others.

Chef Chintan Pandya started his career with Oberoi Hotels Mumbai and was in charge of Indian fine dining restaurant Kandahar within a span of two years. After working for five years with Oberoi Hotels Mumbai and training in different properties across India. He moved to be a food and beverage manager with Jet Airways, before moving to Singapore to head operations as an executive chef and general manager with Gill Capital for their restaurant, Yantra. Currently he leads the culinary team at Junoon, where he is executive chef of the Michelin-starred restaurant. He was voted by Cuisine & Wine Asia as chef of the month, has been featured in many publications, and has multiple awards to his name.

The evening will also provide tastings from Kalindi & Priyam Bakshi of Sattva, an artisanal meal program that delivers deliciously clean, plant-based meals to your home. Inspired by the goodness of a plant-based diet, the rotating menu takes you on a culinary journey across the world, featuring the richness of vegetables and whole grains without any additives or preservatives. They match only the best seasonal local produce with bold and bright herbs and spices that can actually heal you from the inside out. Designed and curated by Kalindi, a neuroscientist, Sattva brings deliciously clean, plant-based made-in-Brooklyn meals directly to people’s homes. The ingredients are fresh, seasonal, and locally sourced where possible.

Priyam’s company, Phirki, also an innovative food delivery company, takes customers on a tasting adventure throughout the Indian subcontinent, all of the creations share the same values: Phirki food is always vegetarian, nutritionally balanced and crafted with fresh ingredients. Customers will appreciate that the food is less greasy and “heavy” than what they may find at other Indian destinations, emphasizing a well-defined balance between home-cooked sensibilities and restaurant-quality fare.

The special Guest of Honor for the event is Madhur Jaffrey, an award-winning actress and bestselling cookery author. Her first book, An Invitation to Indian Cookery, was published in 1973 and since then she has written over 15 cookbooks which are now considered classics in their field, including Madhur Jaffrey’s Ultimate Curry Bible and Madhur Jaffrey’s World Vegetarian. She has appeared in over 20 films, including Merchant Ivory’s Heat and Dust and Cotton Mary. In 2006, she published a memoir of her childhood, Climbing the Mango Trees. Her latest title, Curry Easy, was published in 2010.

Mantra’s philosophy is to emphasize refined and creative Indian cuisine. The menu incorporates both traditional classic favorites and original new dishes that apply Eastern flavors with a Western twist. Their focus is to provide first-class service and an engaging atmosphere across the board: whether dining at Mantra, organizing a party or simply enjoying drinks at Nirvana Lounge. Every day they challenge themselves to build a better environment and become more in tune with the changing needs of their guests.

Emcee for the evening is food personality Kunal Lamba from Star Plus. Having worked for over 14 years at the executive level in hotels and restaurants across three continents, Lamba is an evolving media personality sharing what he knows best paired with a unique showman style. In 2014, Lamba entered the TV world hosting a new, popular reality food show, Kawan Kitchenmate, on Star Plus. In the show, Kunal visits Indian American households across the country, and gets to know their life stories while cooking an impromptu meal using only the ingredients and strange leftovers in their fridge. With his eloquent style, distinctive looks, and dynamic personality Kunal is available for assignments as Kunal Lamba Emcee and Event Management, for prestigious events including awards shows, galas, weddings, and other occasions.

Joining the celebrity chefs will be French Certified Maitre Du Vin Du Bordeaux, Ash Rajan, who will discuss the art of wine pairing. Rajan is a well known Wall Street strategist and keynote speaker on wealth management in 40 countries. You may have seen him on CNN, CNBC, and Bloomberg or read about him in the Wall Street Journal. Ash currently advises doctors, executives and business owners on wealth preservation and transfers at Janney Montgomery Scott, a boutique Wealth Manager in NYC/NJ. Here’s the twist: Ash is also a certified Master Sommelier in French wines and is one of nine in the country to have earned it in France. Ash curates wine, single malt, and cognac events around the world and his well-followed monthly column is published in 17 newspapers.

Serenading the guests with his captivating melodies will be the mesmerizing Indi-pop sensation Manish Israni. Born in Jaipur, Manish now lives in New Jersey. Growing up in India and living in the United States gave Manish an enriching experience in diverse genres of music including Bollywood, Latin, Middle Eastern and electronic dance music. Manish is the artist behind, “Soniye” and “Jaipur Ka Raja,” for Zee Music Company, which recently launched his music.

The evening will be further enhanced by drinks from award-winning mixologist Hemant Pathak. Hailing from foothills of the Himalayas, Hemant brings a creative perspective to his NYC bar, rooted in a deep knowledge of different cultures and flavors. Each cocktail he creates incorporates global flair that will surely feed your adventurous side. In addition to crafting new and unique cocktails featuring herbs, teas and spices from all over Asia, Hemant is a successful competitor on the global cocktail competition circuit.

Guests will wind down the evening with a delicious paan creation from The Paanwaala. Paan is a popular after-dinner treat, which is made by folding dried fruits, nuts and pastes into a betel leaf, a member of the pepper family. The Wizard of Paans would be a good description of owner Ankit Narula, whose passion for authentic paan has given fellow paan lovers the chance to rekindle their suppressed desire to taste authentic paan here in the U.S.

The amazing DJ Vik will provide a memorable ambiance throughout the evening. At the end of the evening, each guest will take home an exquisitely curated gift bag containing several cutting-edge culinary products. The festivities of the evening will be captured and telecast by the Zee TV Network. India Heritage Center’s amazing media partner. Zee TV, the flagship channel of Zee Network, was launched in 1992 with a reach of more than 138 countries and access to more than 500 million viewers globally of the South Asian diaspora. The popularity of Zee arises from its understanding of Indian culture and beliefs which are depicted in its programming and today is available across five continents.

For further information on India Heritage Center, its mission and goal, please contact Vini Melwani at 973-865-8563 or info@indiaheritagecenter.org.