Five culinary students from Kearny High School will be among the competitors at the National ProStart Invitational, April 28 to 30, at the Charleston Area Convention Center in South Carolina. They will participate in the Restaurant Management Competition, where each team will present an entirely new restaurant concept. Students come up with a business plan, consisting of a menu, cost, floor plan, interior, decor, and more. Forty-four teams will compete over the three days, answering questions from judges from the National Restaurant Association, Panera Bread executives, Service Aid and others. 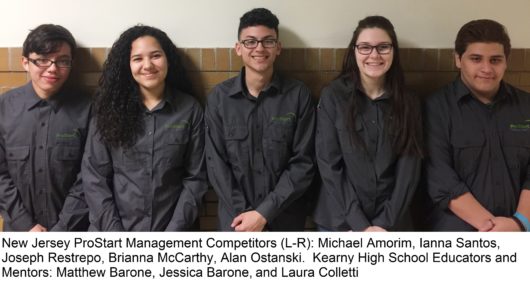 Matthew Barone, Kearny High School’s Culinary Arts Teacher, told Jersey Bites about the culinary program and the opportunities ProStart provides for students. Through ProStart, students can complete a certificate of achievement, which calls for 400 hours of industry time by graduation and passing the ProStart level one and two test. With that certificate, students can receive a significant scholarship (anywhere from $20,000 to full tuition) for major culinary schools. Read on for Barone’s take on this program and Kearny High’s accomplished team.

JERSEY BITES: What’s the culinary program like at Kearny High School?
MATTHEW BARONE: They brought me in six years ago because they wanted to move from home economics into college and career readiness. I used my connections with chefs in the industry to see what chefs are looking for and what young cooks are lacking in. So we brought all those different things together and created a curriculum for getting students ready to go to college or start a career after graduation. We have general introductory classes for those who want to learn the basics. Once students complete that, they can move onto Culinary 1 where they will learn very tangible techniques and skills students would learn in college or in an entry-level position at a restaurant. Culinary 2 consists of three days a week of interning at a restaurant in Kearny. The other two days are spent in the classroom honing in on the skills their mentor at the job site say they’re lacking. They spend time in class [working on] their weaknesses so they’re more college or career ready.

How have you prepared for this competition?
The competition is set up like Shark Tank, where you have to pitch your [concept] in front of judges. Then they ask different questions of various topics within the content and you have to know your concept inside and out so you can answer the questions. In January we meet four to five times a week and then the competition is at at the end of February, so we meet every day. This year we had different faculty members come in as guest judges. We encouraged teachers to ask whatever they had in mind to prepare us for facing the unknown. The students got a lot of experience working with faculty who asked easy and hard questions. Because of this, they were able to answer every question that was asked of them at the state competition in the critical thinking areas especially.

How do you decide who does what?
When we’re in the development stage, I tell the team that this is their concept and their restaurant and it’s either going to succeed or fail because of you. They tend to gear themselves toward the area they’re most interested in. If there’s a conflict and people have differing ideas, that’s where I come in as a mentor and ask them which idea makes better sense in the long term. But it really is a democratic team.

Where did the students get the idea for this year’s competition?
This year they knew they wanted to do something Asian. So in November, we took them to Ani Ramen in Montclair and they fell in love. They were so immersed in the culture and music, and how everyone seemed happy and chatty even though it was a tight squeeze. When we first brought them there, they said that everything sounds so good but I don’t know what any of this stuff is. And that’s where our concept came from. Their restaurant is called All Star Noodle Bar and it’s a hybrid of classic ramen and American flavors and cooking styles. For example, instead of a pork dumpling, they did a cheeseburger dumpling.

What’s your biggest hope for the competition?
I would like the team to feel like they’re not a flash in the pan—because they aren’t! On the national and state level, we are one of the only traditional high schools that compete. We’re up against tech centers and vocational schools who have tons of kids in the program. The kids know their concept and the information and I want them to know they are worth competing against.

Do you have a recipe from their plan that you can share with us?
One of the recipes on their menu is called the Dragon. It’s inspired by what David Chang said in one of his videos. He was saying that growing up in America as a Korean kid, his macaroni and cheese dish was rice cake and a sweet and spicy sauce on it. The kids really got into it and when we brought in all the ingredients, they made it.

What else should people know?
Everything about the culinary program and competition is our Facebook page. But just knowing about something like this is happening is great because it’s fighting the connotation that kids are lazy. These kids are putting in 500 hours of their own time. This is a positive story about a group of kids who met each other in September and now are the best of friends.