Take the chill out of winter with Jersey Bites Buzz, featuring several key openings around the Garden State. Have a restaurant/food outlet opening, closing, or other key development to share? Email your news to info@jerseybites.com. 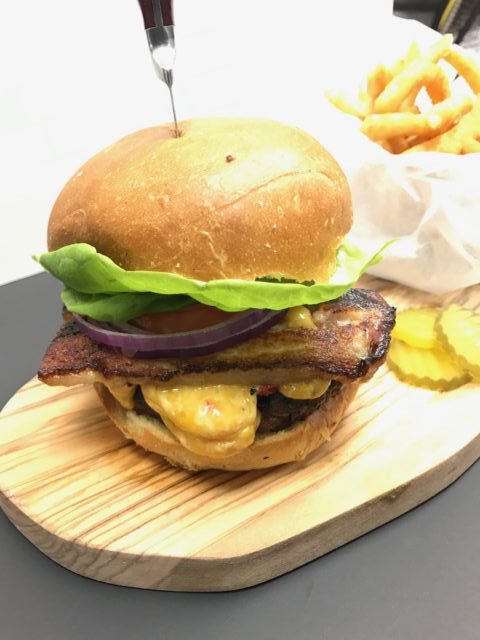 Opened on December 22, this casual sports bar and restaurant features a cozy and rustic interior, 15 TVs (with a 110-inch wall-size model), and an appealing menu that includes such signature items as its pimento cheese pork belly burger, which features housemade pimento cheese and braised pork belly layered on top of a burger crafted with a blend of brisket and short rib. “We also sell a lot of our pub pretzels served with Guinness cheese sauce,” added owner, executive chef, and Bridgewater native Kevin Trimarchi, who noted that the restaurant also offers seasonal items as well as a variety of beers, specialty cocktails, martinis, and Moscow mules. “With all of the chain restaurants in the area, we’re excited to be a unique, friendly, and family-oriented bar and grill with a relaxed atmosphere and a great menu,” Trimarchi said. 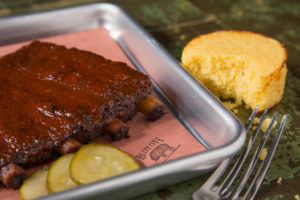 Opened on December 26, this restaurant specializes in authentic southern barbeque. Among the 74-seat restaurant’s signature dishes are its fried chicken, spicy roasted chicken, shrimp and grits, and Memphis-style ribs, which are seasoned, cooked for 14 to 16 hours in a smoker, and then coated in the outlet’s memorable sauce. “People also love our side dishes, including our homemade pickles, corn bread, and collard greens, as well as desserts like our homemade bread pudding, pecan pie, and our chef’s own pecan cornmeal cookies,” shared Manager Nelson Rangel. According to Rangel, the restaurant features a country-bluesy décor, with tables made from the owner’s collection of old doors, and has framed images of Elvis Presley, Etta James, Aretha Franklin, and other rock, blues, and jazz greats lining the walls. “Bluff City BBQ is a very cozy, homey place with friendly service and a menu that guests are really enjoying,” said Rangel, who added that the restaurant plans to offer live music beginning this spring or summer.

On January 30, North Brunswick welcomed the Greene Turtle Sports Bar & Grille, a casual, family-friendly eatery with 45 locations throughout Maryland, Delaware, New York, Pennsylvania, Virginia, West Virginia, and Washington, D.C. The restaurant’s local launch represents its first stop in New Jersey. Seating over 300 in both indoor and outdoor patio space, the 8,000-square-foot restaurant’s signature menu items include Maryland crab cakes, Maryland crab dip, more than a dozen burger combinations, 10 varieties of wings, and 25 to 30 local and national beers. “With our close proximity to Rutgers University, we’re excited to bring our love for food and sports to the community,” said General Manager Dave Greico. The Greene Turtle staff plans to make the eatery an integral part of the local college community by actively hosting fundraisers and tie-in promotions that support Rutgers athletics programs. According to a spokesperson for the restaurant, a total of 15 Greene Turtle outlets are planned for the New Jersey area. 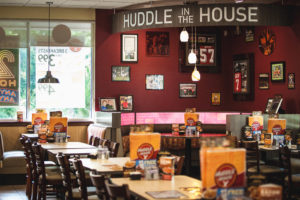 On January 30, East Orange welcomed New Jersey’s first Huddle House, a 24-hour outlet specializing in breakfast items. The restaurant counts nearly 400 locations throughout the U.S., largely in the southeast, mid-Atlantic, midwest, and southwest. Offering a range of burgers, sandwiches, salads, and other homestyle, Southern-inspired fare, the over 50-year-old, Atlanta-based franchise is known for its waffles, French toast, omelettes, and other hearty breakfast foods, which are popular at all times of day and night. “Huddle House is a brand that I’m proud to introduce to East Orange and all of New Jersey,” shared franchise owner and retail and restaurant industry veteran Dipen Desai. “The food is delicious and the new restaurant design truly stands apart from the competition.” According to a Huddle House spokesperson, the restaurant prides itself on “offering all-day breakfast and being a neighborhood gathering place.” Desai plans to open additional Huddle House locations in Newark and Roselle this spring. 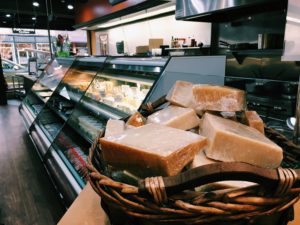 February 7 marked the official grand opening of Johnny’s Italian Market, a gourmet Italian deli and salumeria that seats 16 to 20 and is located just around the corner from the owners’ two other establishments, Café Anello and Sogno Coffee House. Owned by Chef John Vitale, his wife, and her parents, “Johnny’s Italian Market is focused on freshness and everything in our deli case is made on site,” Vitale shared of the cozy shop, which offers personal-sized, oblong, wood-fired Neapolitan pizzas, hot and cold sandwiches, made-to-order doughnuts, and an extensive selection of cheeses as well as a variety of Italian specialties including their own Café Anello line of infused olive oils and vinegars (also available at Kings Food Markets), truffle pearls, homemade sauces, and fresh-cut pasta. “We make our own mozzarella and crush two tons of San Marzano tomatoes annually for sauce,” raved Vitale of the family’s dedication to freshness and authenticity. “In an age of chain outlets, our model is simple,” he said of Johnny’s, which will soon be expanded to include a retail market component. “We want to keep the small, family feel of our business and pride ourselves on being a unique neighborhood establishment where we know everybody’s name and are an integral part of the community.” 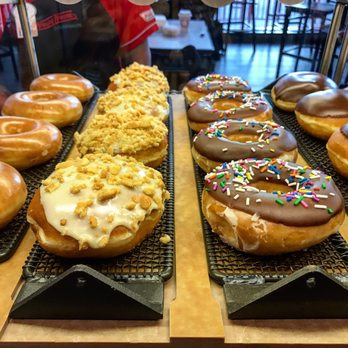 On February 7, doughnut powerhouse Krispy Kreme made its long-awaited debut in Jersey City, adding the new Hudson County outlet—its second in New Jersey, following its location in Collingswood —to its family of several hundred locations nationwide. The iconic brand, which was founded in Winston-Salem, NC, in 1937 and celebrates its 80th anniversary this year, sells dozens of varieties of doughnuts, along with coffee and other breakfast foods like bagels and oatmeal, and received an overwhelming response to its Jersey City launch by the local community. Since opening, “business has been great, very robust, and we’ve been overwhelmed by our customer’s enthusiasm,” shared a store manager, who joked that “we’d planned for a more low-key launch, but clearly the secret got out.” Offering 16 to 20 varieties of doughnuts in addition to the Original Glaze, the new Jersey City outlet is both a doughnut factory and retail location through which “people have a viewing window to the live production of our products, including everything from the processing and proofing of dough to the glazing, cooling, and boxing of finished doughnuts,” he said. According to the manager, some of the most popular flavors among guests so far include strawberry iced, chocolate iced glazed sprinkle, New York cheesecake, glazed blueberry, maple leaf, and glazed sour cream. “We have a terrific variety with something for every palate,” he said. Ultimately, he concluded, “we hope to bring the joy of Krispy Kreme to Jersey City. Unlike some of the larger chains, you won’t find Krispy Kreme stores on every corner, in every town, or even in every state. We’re excited to bring the freshness and uniqueness of our brand to this city.” 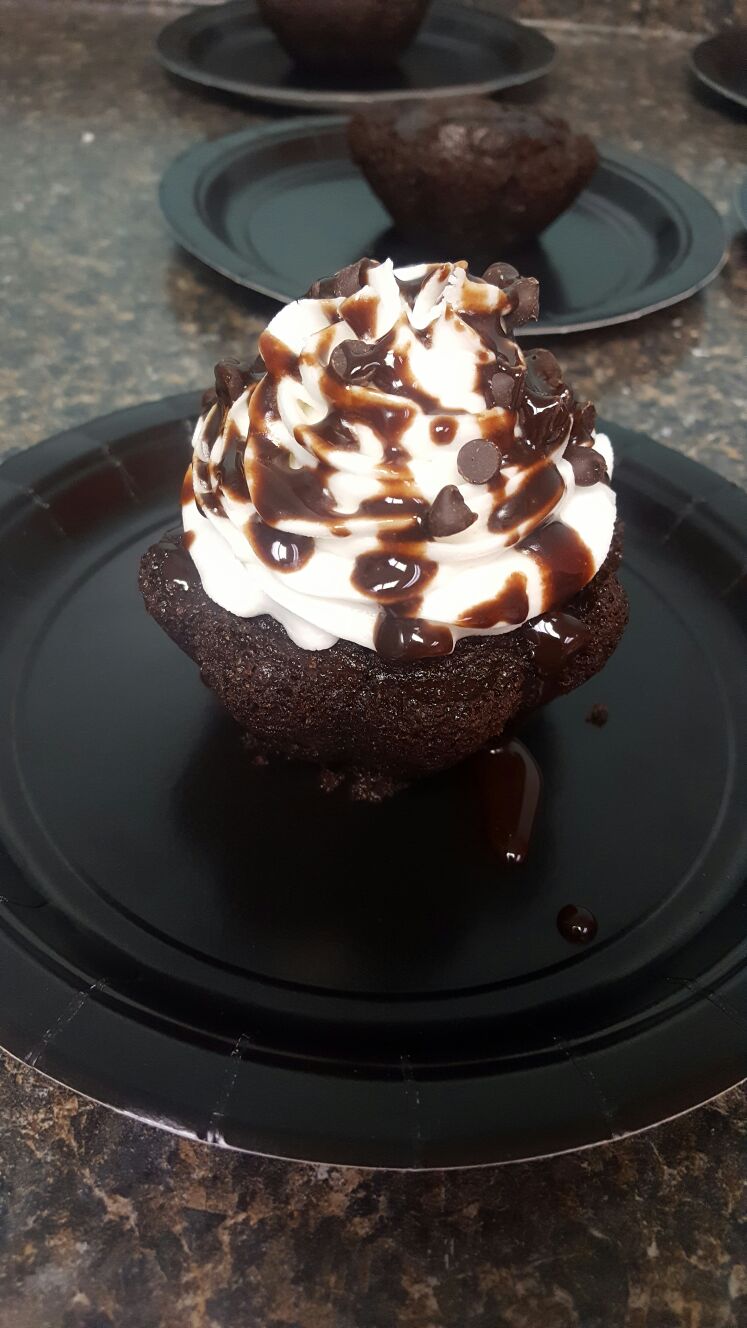 On February 11, Mo’Pweeze Bakery celebrated the opening of its flagship store, in Denville, with a ribbon cutting ceremony, live music, and kids’ entertainment. Touted as New Jersey’s first “Top 8” allergen-free bakery, the bakery’s products, which include indulgent pies, breads, cookies, wedding cakes, and cupcakes such as its signature Chocolate Sin variety, which features moist chocolate cake and a generous helping of frosting drizzled with chocolate syrup and topped with chocolate chips, are free of the FDA’s “Top 8” allergens (milk, eggs, fish, shellfish, tree nuts, peanuts, wheat, and soybeans) and are also sesame-free and vegan. “We know how hard it can be to find delicious treats when life-threatening allergies are present,” said Owner Christine Allen of a concern that affects one in 13 children in America, including Allen’s own kids. “Four members of our own family of five have food allergies and our son Maddox is allergic to over 37 foods,” she explained, “so it’s our mission to develop and offer delicious treats that are safe and free of common allergens. Once you take a bite of our treats,” she promised of the bakery, which also features a party room that can accommodate 40, “you’ll be asking for…Mo’Pweeze!”