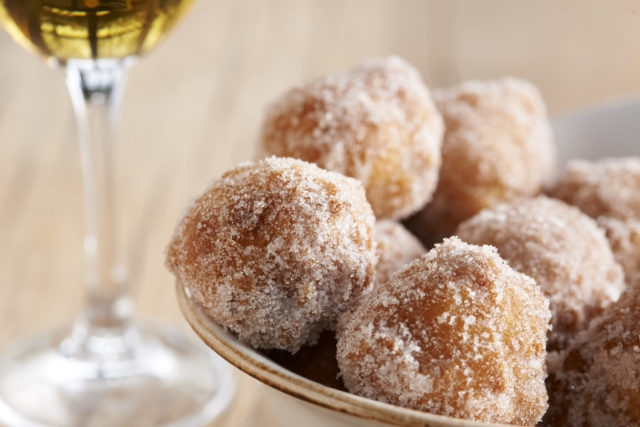 Stuart Marx, head pastry chef at Halifax, at the W hotel in Hoboken, has been in his role since the restaurant’s opening in 2016. Halifax features Northeastern farm and coastal cuisine, with an emphasis on local and sustainable ingredients. Marx is also the head pastry chef of Avenue, in Long Branch.

Fascinated by the art of cooking since he was a child, Marx would watch iconic TV chefs like Julia Child. These days, he showcases his sophisticated and crave-worthy desserts with a culinary style he describes as “classic with a twist.” For our latest Chef Spotlight, Marx told Jersey Bites about his adventures and experiences in the industry.

JERSEY BITES: Did you cook much in your youth?
CHEF STUART MARX: Absolutely. I became fascinated with cooking at an early age, probably between 10 and 12 years old. I had always been involved in the arts and liked being creative, so cooking was a natural fit. I remember one of the first instances that really sparked my interest in cooking was this dish my neighbor’s dad would prepare when we were kids growing up on Long Island. He cooked these pan-fried potatoes and eggs that were so good and I was just fascinated by how delicious they were. I would go home and try to recreate those potatoes. And my interest in cooking grew from there. Cooking wasn’t my first career; I started out in the arts and antique business, but I always cooked.

Who are your important mentors?
My mentors are both personal and professional: one of my first culinary mentors was my friend’s father when I was young, who made the eggs and potatoes dish I mentioned earlier. And from age 18 on, my mentor was a friend’s mother. She was from a classic Italian family and I spent many years enjoying dinners in their home. She became my second mom and had the most incredible style of Italian American cooking. She really instilled in me the art of cooking, entertaining, serving and what a dinner should be. She is no longer with us but remains strong in my heart.

Professionally, right out of culinary school, my mentor became Jean-Georges Vongerichten. I worked at his restaurant, Vong, in Manhattan right out of school and fell in love with Thai food. That’s where I developed many of my signature desserts.

David Burke is also a significant mentor of mine. When I left the Odeon, around 2004, I was all set to take a six-month vacation until I received a call from the chef, who said there was an opportunity for me to work on a project in Manhattan called the Hawaiian Tropic Zone, for which David Burke would be the consulting chef. I met him at the tasting and our relationship grew from there. He became my greatest mentor and a great friend.

After the Hawaiian Tropic Zone project, he brought me into his group and I worked at many of his restaurants, from Townhouse to being part of the opening team of Fishtail and eventually the stars aligned for me to be the pastry chef of his restaurant Fromagerie, in Monmouth County.

What led to your specialty being pastries and desserts?
I attended the New York Restaurant School for culinary arts and the program did touch on pastry, so after class I’d often head straight to the grocery store, buy the ingredients I learned about and bake all night. I interned at Vong right out of school and started out on the hot line. After my three-month internship, they offered to hire me. As fate would have it, the only opening available was in the pastry department. I said, “That’s perfect for me,” and took the job.

What do you love most about your job?
Making people happy, creating and working from my heart. This business is very tough but I can’t imagine doing anything else. I love seeing the joy in people’s faces when they eat the desserts I’ve created.

What advice do you have for others wishing to enter the profession?
It’s a labor of love. I’m not going to candy coat it—you must be ready to make this profession your life. There will be long hours and sacrifices. Remember to be patient, open minded and to listen and learn within a kitchen brigade system. You need to have thick skin and be able accept harsh criticism. Having said that, if you truly love being a chef, you won’t be able to imagine doing anything else. The restaurant will become your family and your safe haven.

What unusual flavor combinations have you discovered?
Halifax is a unique animal because the concept is food based on local ingredients from the North-Atlantic region including New Jersey, New England, and Nova Scotia. To fit the concept, I don’t incorporate tropical fruits into my desserts, which at first was a challenge for me because many of my signature desserts have that Thai influence from my Jean-Georges days, when I utilized ingredients like coconut and kaffir lime. Having said that, Executive Chef Seadon Shouse and I have learned to work very well together so that my classic with a twist dessert style blends cohesively with the concept of the restaurant. Some of my favorite flavor combinations have been a classic sundae with buttermilk ice cream, blueberry compote, and lemon cornmeal cookies. We also do a maple crème brulee with candied pecan shortbread, which stays in that style of the rustic, country restaurants that inspire Halifax. Another one is apple fritters with three types of dipping sauces: rosemary-caramel, apple-cranberry, and spicy chocolate. [Apple fritters shown at top.]

What has been the most challenging dessert or pastry creation you have accomplished?
I wouldn’t say it was one dessert that was the challenge, but the challenge coming into Halifax was combining my style with the concept of the restaurant so that everything works well together. I’m happy to say it has been a success.

Do you have a personal favorite dessert?
My famous toasted coconut layer cake, which can be enjoyed at Avenue in Long Branch, in the summer. It’s something I’ve morphed and creative over the years, first inspired by a coconut cake from David Burke’s Townhouse. And in general, I also love a good pie and any classic, down-home dessert.

How do you describe your style?
My style is clean and precise, not too sweet with a great balance of flavor. I don’t like plates that are too busy. I’d also say that my approach to recipes is very scientific. And at this point in my career—I’m a 20-year-veteran—I create most of my own recipes. In school I learned that you truly become a pastry chef when you understand proportions and can create your own desserts. Also, some of my best desserts have been items that I’ve worked on and morphed over 10 years. That’s because I’m a perfectionist and accept nothing but the best.

Photos courtesy of Halifax and Avenue.