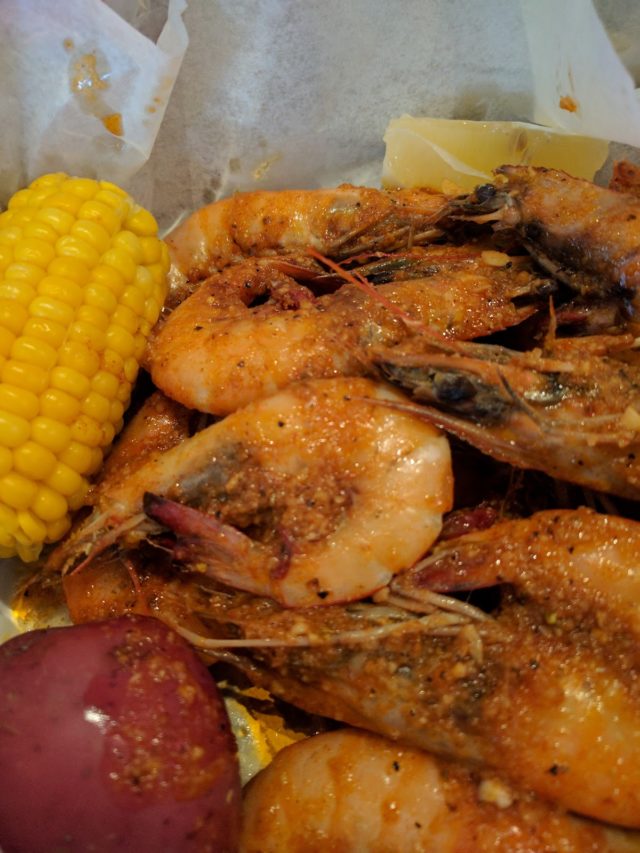 Note: Jersey Bites was invited to visit The Boiling House and our writer received a complimentary meal.

East meets West. Sea meets land. Combining Cajun seafood with Vietnamese cuisine, The Boiling House opened its doors in Cherry Hill at the beginning of October. Although Vietnamese-owned seafood restaurants are increasingly popular in other areas of the United States, The Boiling House is one of the first establishments of its kind in our area: innovative Viet-Cajun fusion meets the Garden State.

The Boiling House serves the same small but customizable menu for both lunch and dinner. Signature dishes include boiled, cajun-spiced shellfish, Vietnamese noodle dishes, and wings. The interior is small, but casual enough that diners will feel comfortable bringing their families and children, though the restaurant doesn’t include a kid-specific menu. As a BYOB, it’s also an intimate date-night option for couples who want to relax and enjoy the game on one of the restaurant’s large flat-screen televisions.

The Boiling House’s location once housed French restaurant Dream Cuisine. Diners familiar with Dream Cuisine might be surprised by some of the aesthetic changes to the space, now decked out in a muted orange and red nautical theme. One wall displays an old-fashioned life preserver, and the other a fishing net and decorative, painted crabs and lobsters. While we were there, country pop played over the speakers. Despite the changes, The Boiling House maintains the dark, low-key vibe that also characterized its predecessor.

We started our meal with crispy wings coated in Vietnamese sweet chili sauce, and they were everything owner Khoa Mei claimed they’d be: crispy, with a slightly sweet and spicy tang. Mei also brought us a side of garlic basil aioli, and as much as we enjoyed that too, we just couldn’t get enough of that sweet chili sauce.

Next came our oxtail pho. I’d only tried oxtail in Jamaican cuisine before, but it turns out it adds just as much depth to Vietnamese food. As in other pho restaurants, a plate of condiments like basil leaves, bean sprouts, lime wedges, brown sauce, and pepper slices accompanied our meal. With full honesty, I told Mei that their soup was the best pho I’d tried in New Jersey.

Once we polished off our soup, it was time for the highlight of the meal: the cajun seafood course, which is the most customizable part of the menu. First, we selected from items like crawfish, shrimp, crabs, mussels, lobster, clams, and raw oysters or clams. Then we chose our sauce and spice level. For those who prefer their seafood without added spice, The Boiling House also offers a no-sauce option.

I decided on shrimp coated in the Boiling House special, which blends lemon pepper, Old Bay, Cajun, and garlic butter sauces into one flavor-packed mix. The shrimp come whole, with the heads and tails still on, as Mei said cooking them this way adds a lot of flavor to the dish. While I erred on the side of caution with a medium level of spice, my husband opted for Dungeness crabs smothered in a hot Boiling House special sauce. As we expected, his crabs had a bit more heat to them than my shrimp. He sniffled a bit from the spice, but said it was a perfect level of heat for his tastebuds.

Before our meals arrived, Mei joked that this wasn’t on-the-go, eat-while-you-drive kind of food. He wasn’t kidding: by the end of our lunch, both our hands were coated in spicy goodness. Fortunately, our meal came complete with disposable, plastic, adult-sized bibs and gloves. I found that I wasn’t experienced enough at shelling whole shrimp and needed the dexterity of my bare hands, but the bib at least protected my clothes.

Neither of us minded the mess: the food was that delicious, and with the Boiling House’s down-home vibe, we felt comfortable enough to get down and dirty with our meal. Our only regret was that we didn’t take advantage of the restaurant’s BYOB status, because this was the kind of meal that would have been perfect with a beer or two. Mei was generous enough to bring us some freshly-squeezed lemonade. Sometimes I find lemonade cloyingly sweet, but we both enjoyed this refreshing batch. 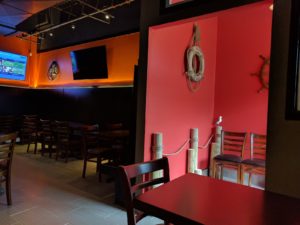 At the table closest to us, a husband and wife dined with their toddler. Mei told us this was the family’s fourth or fifth time visiting the Boiling House. The restaurant has already acquired several repeat customers during the short time span since it opened, even though they have done little in the way of advertising beyond creating a Facebook page.

“I care a lot about quality of food,” Mei revealed, emphasizing that being a father of young children has made him more attuned to ingredients in food. Just as he watches what he feeds his kids, Mei is cautious about the foods he serves his customers. Products with questionable reputations, like MSG, are banned at The Boiling House.

Mei orders The Boiling House’s seafood from Philadelphia-based Samuels and Son, a company which prides itself on using sustainable fishing practices through several partnerships with environmental organizations like the Marine Stewardship Council, among others. If Mei cares about ethics in his seafood, where he sources his meat is also an important component of his business practice. The Boiling House menu even boasts a free-range chicken noodle soup.

A Central Jersey native, Mei loves to travel. He spent six months on the West Coast researching the seafood and noodles he wanted to emulate when he opened a restaurant of his own. One of Mei’s biggest influences was The Boiling Crab, a small chain with locations in Southern California, Nevada, and Texas. But The Boiling House is no copycat: Mei and his crew put their own unique twists on each dish. Once Mei returned home, his wife Jenny Mei, who is chef at the Boiling House, spent another year practicing and perfecting each dish, inviting friends and family members to taste test until they got their own spice blend just right.

As you may expect, this style of Vietnamese-Cajun food originated in Louisiana. Vietnamese immigrants fled to the United States following the Fall of Saigon in 1975, as Elizabeth M. Williams describes in her book New Orleans: A Food Biography. Louisiana was attractive to the people of Vietnam because its climate and proximity to fishing waters shared similarities to their homeland. Many immigrants were also Catholic, and many Catholic charities helping refugees were based in Louisiana. Today, New Orleans is home to one of the largest Vietnamese populations in the United States. According to a 2010 New York Times article, the children of war-era immigrants blended the boiled, Cajun seafood characteristic of the New Orleans area with the flavors of their Vietnamese heritage. Today, Viet-Cajun food has spread to several other areas, but is especially popular in Southern California and Houston, Texas.

Now, adventurous seafood lovers can rejoice that the Meis have brought this tasty trend to South Jersey. Even though they have never owned a restaurant before, the Meis have already perfected the art of seafood. The Boiling House is open from 4 p.m. to 10 p.m. Tuesday-Friday, and from 12 p.m. to 10 p.m. Saturday-Sunday. Bring your own beverage and head on over before the crowd arrives. You won’t be disappointed.