Chef James Laird and his business partner Nancy Sheridan Laird, to whom he is married, have made their mark in Chatham with Restaurant Serenade over the past two decades, and celebrate its 20th anniversary this season. From Laird’s first restaurant experiences as a teenager in New Jersey to his current post as an award-winning, highly acclaimed chef whose name is synonymous with “can’t miss it” in the restaurant world, Laird is a down-to-earth guy who wants to know what’s on his plate and also is sure to give back. Read on to learn more about Chef James Laird and what has inspired him throughout his career. 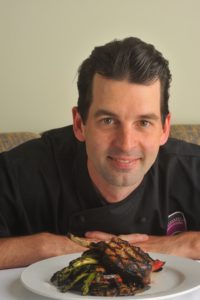 JERSEY BITES: What is your earliest food memory?
CHEF JAMES LAIRD: I was a busboy working in an Italian restaurant in Middlesex, New Jersey. When you’re 14, you’re starving. I grew up very Irish, with meatloaf and baked potatoes, mac and cheese—simple foods. There was London broil, and we always had a baked potato at dinner. And then I’m working in this Italian restaurant and I see tortellini and pasta and Caesar salad and foods my mother never made or ate, and I’m eating it. I would clear the plates of this Italian food. I’m actually eating it off the customers’ plates—I got to clear it, the tortellini, and I’m like, “Wow, I’ve never had anything like this.” That’s my earliest memory of food beyond what my mother made for me.

When did you realize you wanted to make cooking a career? Was there an “aha!” moment?
Probably the following year. I asked the owner if I could work in the kitchen, for free, so I would work in the summer from 8 in the morning until 3, and then take a break and come back at 5 and be a busboy for pay. I was 15. Just seeing the guys making that food, it got me hooked. The restaurant owner mentored me. I was young, I didn’t have any money, I didn’t have a father, so during that time as a busboy, once a month on a Monday, when the restaurant was closed, we would go into the city to all the nicest Italian restaurants in the city, for research. He knew a lot of the owners, so I would get to taste all of this amazing food. This was 1985—or earlier—and I think at that age, you’re so impressionable. To see something I never saw before made me hungry to learn, to do more.

Who are some of your other early influences in the industry?
One of the chefs at that restaurant where I was a busboy was a graduate of the Culinary Institute of America, and when I was 15 he brought me up there to see the place and to introduce me to the chefs. It was such an eye-opening experience. I knew at a young age that I wanted to cook. Now, cooking is a chosen field. Back then, I don’t think I was the best at homework and stuff like that, so it was a good route for me instead of going to college.

What is your cooking style?
American chef, trained in France. I use American ingredients with French influence and technique, a little bit of global influence in flavors. Really just local food, good food, honest food. Simply prepared, not a lot of cream and butter. Vegetables are my specialty, and then the protein is added at the last minute to make it more salable. You don’t have to eat it just for special occasions. It’s approachable and it just tastes good. And I like the word identifiable: I like to know what I’m eating. The thing a lot of chefs forget is, it looks great, it’s creative, inventive, but do you really want to eat it? Am I ever going to come back for it? You’re cooking for the customers, and those are the people who are paying everybody’s salary and bills.

What is the greatest opportunity that has come to you as a result of cooking?
One of the chefs at that restaurant I worked in was an old Roman chef, who had been in the business for years. He worked on cruise ships, spoke so many languages, he cooked French food, Italian food, American food, and he had also worked with David Burke. This chef got me an interview to work with David Burke when I was 19, and that was an eye-opening moment of my life. Now I’m working in this fancy Brooklyn restaurant, and just really working super hard and enjoying every experience working there. His creativity and the level of dedication for the team, that was a really life-changing [experience] for me.

What is the most memorable meal you’ve had, what did you eat, and where was it?
We were in Spain, by the beach, about five years ago. They were making paella, but not like the paella you would have in Newark in the Ironbound. These were very thin-crusted, and they cook them on an open flame with the shrimp and calamari and lobster from the region. I was with my wife on vacation and I think that anything you have on vacation, when you’re relaxed—it’s a memory. Now if we have a dinner party, we have paella parties because it made such an impression on us. 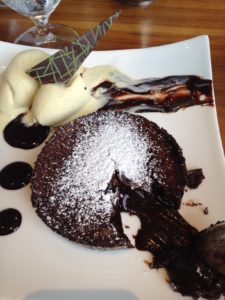 What is the best advice you have to share with someone interested in becoming a chef?
Definitely try it out first, before you go to culinary school. Definitely go to culinary school. I think it’s a great experience, and eye opening to learn about different styles of food. And you learn wine, you learn design, you learn sanitation. And then figure out what you want to do. Have goals. I think the key to my success is having goals. I’m very goal oriented, whether it’s a long-term goal, like when I was 15, to open my own restaurant, but in between there you have to have short-term goals and medium-range goals. Write them down and work toward them and just work hard. Integrity is the most important thing. Really just be nice to people, don’t burn bridges, treat people with respect.

What is the one staple food you always have in your cupboard at home?
Butter.

What is your favorite comfort food?
Pizza.

What New Jersey restaurant do you enjoy dining at, besides your own?
La Focaccia, in Summit.

If you could have dinner with any three people, living, deceased or fictional, who would they be and why?
Definitely my mother—she died. And my father in law—he died. And that restaurant owner who really started my life out. If it wasn’t for those three people I wouldn’t be where I am today. My mother used to tell me, “hard work!” And my father-in-law helped me buy that first restaurant, and the restaurant owner who mentored me to become what I am today.

Are you working on any upcoming projects our readers would be interested in learning about?
I work with the Community FoodBank, in Hillside. I go there and mentor the kids, and hire them. They have a very nice culinary program. I utilize their staff and bring them to the kitchen to work on my off-premise stuff. I’m on the board of StreetSquash Newark, which is an urban mentorship education program that teaches kids squash, and teaches them leadership and education and college prep. It gives kids a better chance to succeed.

Anything else you’d like to tell us?
Nancy and I are opening a restaurant at the Chatham train station, with New Jersey Transit. That will be probably about nine months to a year out.