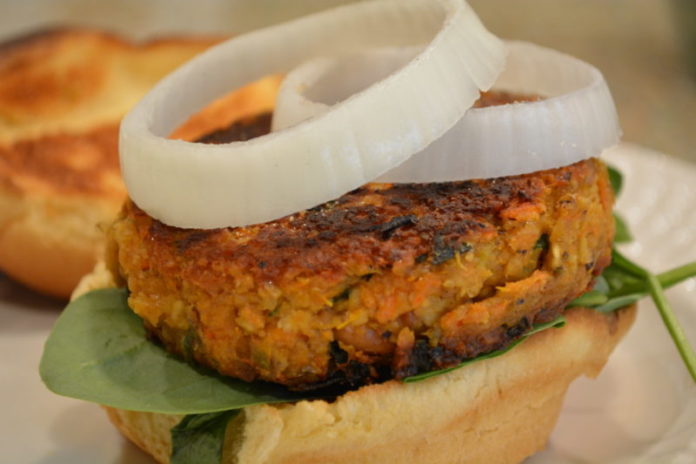 If you’re like me, the term veggie burger may, at first, feel somewhat oxymoronic. After all, how could a patty-shaped amalgamation of vegetables possibly compete with the unctuousness of a great burger made from nothing but beef?

Upon trying some of the delicious offerings from Jersey City Veggie Burgers however, I realized just how wrong I’ve been.

Started in 2012, Jersey City Veggie Burgers began as the result of founder Liz Migliore’s strive to create a better veggie burger for her vegetarian husband. “I wasn’t thrilled with the grocery store options,” Migliore says.

Since then, Jersey City Veggie Burgers has frequented the New Jersey farmers’ market scene, attending both the Princeton Farmers Market and the Riverview Farmers Market, to name a few. The burgers are also featured on the menu at six restaurants in New Jersey, including Stuffed grassfed burgers in Montclair and Left Bank Burger Bar in Jersey City, and can be found on the shelves of nearly a dozen grocery stores throughout the state.

After four successful years in business, Jersey City Veggie Burgers is shifting its sights from farmers markets to retail distribution, so it’s likely that the burgers will be making an appearance at many more grocery stores soon. 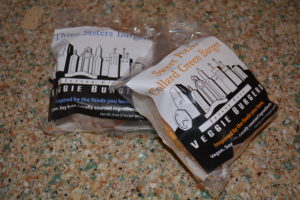 While Migliore is enthusiastic to make the change in order to keep up with increasing demand, the transition is bittersweet. “I’ve loved doing farmers’ markets,” she says. “It’s been a great way to meet customers and just become friendly with so many people through that avenue.”

With a lineup that consists of a trio of delicious vegan, soy-free burgers, made from ingredients that are locally sourced and organic whenever possible, it’s no surprise how popular Jersey City Veggie Burgers have become.

From the West African-inspired sweet potato collard green burger, to the molto Mediterranean white bean broccoli rabe burger, to the spiced-up, Tex-Mex Three Sisters burger, each variety is packed with its own unique flavor and it certainly won’t be long before shoppers find their favorites.

The sweet potato collard green burger was the first burger Migliore developed. It remains her personal favorite since “it was the first one and the one that I eat most often just because it’s very hearty.”

While the burger was inspired by a trip Migliore took to West Africa, its flavor also highlights the similarities between West African cuisine and American comfort food. “I was really fascinated to find there that a lot of the food there shares ingredients with comfort food in the South, like sweet potatoes, peanuts, greens, and things like that,” says Migliore.

Creating the recipe for the sweet potato collard green burger was a labor of love. “I worked on that for about a year to a year and a half,” explains Migliore. “It took a while to get the balance of ingredients and the consistency right. The other ones came a little more quickly.”

The other two-thirds of the Jersey City Veggie Burger lineup may not have taken as long to perfect, but that doesn’t mean that they’re any less distinctively delicious. 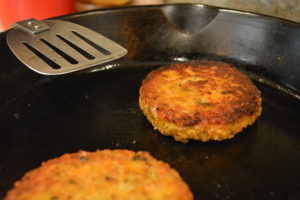 The white bean broccoli rabe burger, inspired by a similar dish made by Migliore’s father, brings together the richness of smooth white beans paired with flavorful broccoli rabe, along with Mediterranean vegetables, olive oil, fresh lemon juice, and garlic, painting a delectable vignette of Italian home cooking on a bun.

The Three Sisters burger brings its flavor inspiration stateside, alluding to the savory spices of the Southwest. The burger gets its name from three key ingredients: pinto beans, corn, and squash. Lime juice and poblano pepper add a further kick of flavor, making the Three Sisters burger even more unmistakably Tex-Mex.

In celebration of Jersey City Veggie Burger’s move to retail, I decided to try some of their burgers for myself. What made this occasion even more momentous is that these were the first veggie burgers I’ve ever had—really! I chose to try both the sweet potato collard green burger as well as the Three Sisters burger and could not have been more pleased with my selection.

Migliore recommends that the best way to prepare the veggie burgers is “in a cast iron skillet or a pan on a stove. I like the cast iron skillet because it gives the burger better color and texture. All you need is a little bit of oil and medium heat.” After trying this method for myself I would say I certainly agree. The exterior of both burgers caramelized and crisped up excellently from the heat of the cast iron skillet, while the inside remained tender and rich.

The flavor of the sweet potato collard green burger was tastefully balanced between the welcome pairing of sweet and savory. The sweet element of the burger—the sweet potato, of course—made the burger warm and comforting, bringing to mind memories of sweet potato casserole my family makes for Thanksgiving each year. This sweetness was far from overbearing however, as the burger was still plenty savory. This was primarily due to the inclusion of peanuts throughout the burger, along with the hearty collard greens. I was especially fond of the salty nuttiness provided by the peanuts since admittedly, one of my favorite burger toppings is peanut butter—heresy, I know. The peanuts also added a degree of umami meatiness to the burger, enough to convert even the most fervent burger traditionalists. 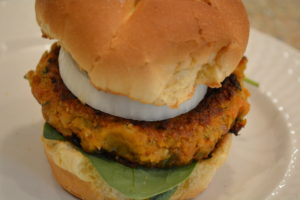 Upon trying the Three Sisters burger I was immediately won over by the spiciness provided by the poblano pepper. The degree of spice certainly isn’t enough to deter those with an aversion to spice, but rather elevates the flavor of the burger as a whole. I found the Three Sisters burger to be more similar to a beef burger than the sweet potato collard green burger as it was even savorier, paired with elements of spice and smoke.

Ultimately, they both were delicious, wholesome, and healthful alternatives to beef burgers. So whether you’re a vegetarian, a veggie burger lover, or someone like me who was too stubborn to accept that veggie burgers can be just as good, if not better than its meat-made equivalent, keep a lookout for the Jersey City Veggie Burger lineup as their offerings begin stocking shelves at grocery stores near you.

For more information about Jersey City Veggie Burgers and where you can find them, visit the website and Facebook page.