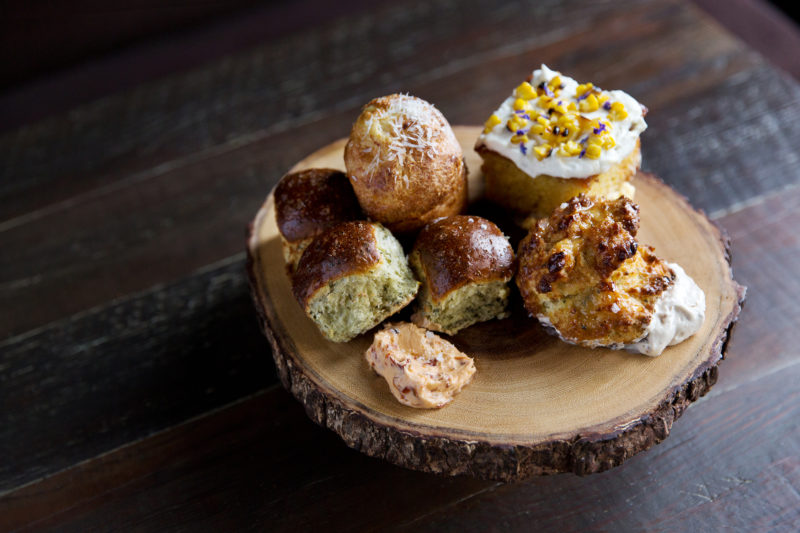 Jersey Bites contributors Terry Krongold and Dina Deleasa-Gonsar stopped by the newly opened City Perch in Fort Lee. Here are each of their accounts.

Terry Krongold
Note: Jersey Bites was invited to visit City Perch and our writer received a complimentary meal.
Picture, if you will, a beautiful, modern, high-rise building located just a block or two from the George Washington Bridge. The building, part of the new Hudson Lights residential/retail complex in Fort Lee, houses City Perch Kitchen + Bar, the new restaurant with celebrity chef Sherry Yard at the helm. The kitchen, overseen by Yard, is humming. (After almost 20 years working at Wolfgang Puck’s Spago, Yard is now the senior vice president of culinary brand development for iPic Entertainment.)

This writer, on assignment for Jersey Bites, was invited to preview the restaurant’s offerings at a media event a few weeks ago, and I must tell you, I was wowed (which doesn’t happen to me very often).

The space itself is beautiful. Set on the ground floor of 2023 Hudson Street, with floor-to-ceiling doors that open to allow the bar/lounge area to spill onto the street during warm weather, you are immediately drawn in. Gorgeous lighting and intimate banquettes make perfect little conversation pits for a drink and a snack or a full meal.

I hope you’re thirsty because City Perch’s wine/cocktail/beverage program was created by Adam Seger, who has worked at such prestigious restaurants as TRU in Chicago, and The French Laundry in Yountville, California. I loved the applejack margarita, and the Charlatan, a lovely concoction of Pimms, cucumber, and seltzer, all “excessively garnished” (their words, not mine). This fabulous drink is Seger’s homage to Charlie Chaplin, who starred in several films produced in Fort Lee. Fittingly, there is an iPic movie theater in the building, where you can order up several of these same menu items plus cocktails and wine to be delivered right to your seat!

Picture yourself at this sparkling new restaurant.

Dina Deleasa-Gonsar
Fort Lee has channeled New York City vibes with the opening of City Perch Kitchen + Bar. City Perch is a full-service restaurant and bar that is part of the new iPic Theater at Hudson Lights. Under the leadership of James Beard Award-winning Chef Sherry Yard, the restaurant brings local ingredients from the Hudson Valley into a sleek and stylish setting.

As you arrive at City Perch you are greeted by the lively indoor/outdoor bar. This is reminiscent of New York City restaurants that allow for sidewalk seating and an open air concept. However, it is a much more serene setting without all the horns honking and cars whizzing by. Before being seated it would be wise to spend time getting a cocktail by the bar. The inventive and adventurous cocktail menu has been overseen by Adam Seger, master bartender. His style is based on the garden-to-glass concept, which makes his cocktail list truly special. Try an applejack margarita, complete with apple salsa, or a cherry mule, with homemade ginger beer. Then transition to your table, where you’ll be surrounded by twinkling lights, trees, and an open kitchen.

The menu has been crafted with local ingredients in mind. Chef Yard brings an impressive list of accolades and credentials to the table. When you are eating at City Perch there is a chance you are eating what Oprah eats as Chef Yard has cooked for her among countless others. She has worked with Wolfgang Puck for nearly 20 years and her desserts have been served up at the Grammy and Emmy Awards.

Although some of us may pass up the bread basket this is one place where at least a sample is a must. The honey-dipped corn bread and orange sage biscuits are experiences unto themselves. Move on to the fluffy loaded baked potato croquettes or maybe the short rib slider with kimchi. The menu also includes a list of pizzas from the oven and seasonal skillets. Whatever your choice, rest assured it has beens crafted with seasonal ingredients.

City Perch offers a late night bar menu as well as a $20 dollar Brunch Box on Saturdays and Sundays (quite a deal). With offerings from the menu available inside the movie theater, City Perch is taking dinner and a movie to a whole new level.

Bread board photo at top courtesy of iPic Entertainment.